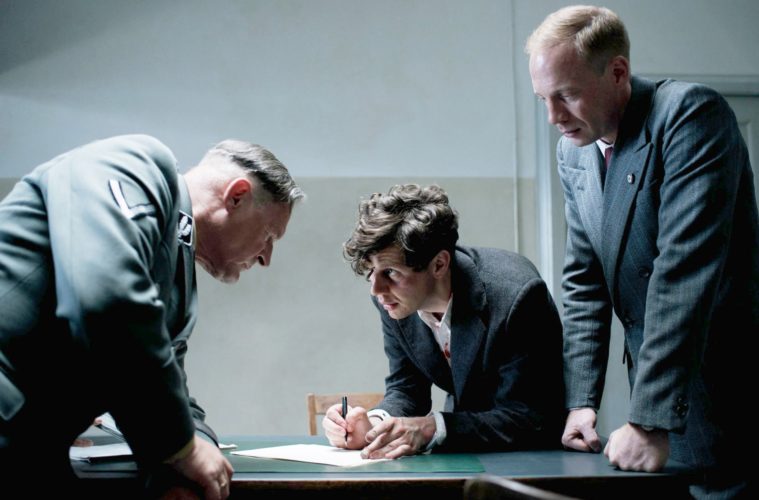 After trying his hand with higher profile disappointments such as Diana and The Invasion, Downfall director Oliver Hirschbiegel recently returned to an era his most acclaimed film takes place in. 13 Minutes follows the true story of Georg Elser, a carpenter who, during the early months of World War II, planned to bomb the location where Hitler would be at giving a speech.

We said in our review, “To its credit, 13 Minutes does not use the bombing as the narrative centerpiece. Rather, its failure is depicted in the first scene and the rest of the film alternates between Elser’s interrogation and torture following his arrest and his life in the prewar years. Introducing the blunt and sentimental style that will dominate the film, the period preceding the Nazis’ rise to power is rendered as a cloying idyll, where the young Elser and his friends spend carefree days swimming in picturesque lakes, lounging in the sun, courting pretty girls and dancing with them to the rustic sounds of the accordion. At regular intervals, the film cuts to 1939, inevitably on a shot of Elser’s increasingly mangled face, underlining the idyll’s gradual destruction.”

The first U.K. trailer has now arrived, which can be seen below for the film starring Christian Friedel and Katharina Schuttler.

From the director of the Academy-Award nominated Downfall – 13 MINUTES tells the incredible true story of the man who nearly changed the world – Georg Elser, a carpenter who attempted to carry out a bomb plot against Hitler at a Nazi convention in Munich 1939. The film follows Georg’s fascinating confession, of not only how a seemingly non-political man came to this point, but also delving into his personal relationships and how they were affected by his beliefs, especially with the love of his life, Elsa.

13 Minutes hits U.K. theaters on July 17th and is awaiting a U.S. release from Sony Classics.