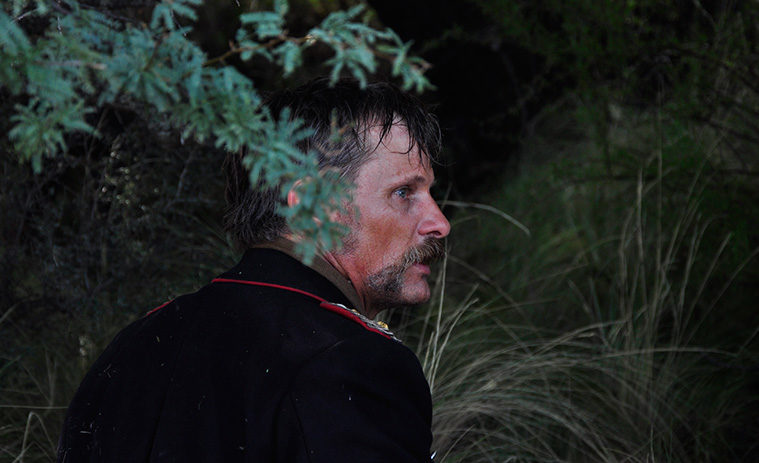 Few actors have used their blockbuster cred as skillfully as Viggo Mortensen. Following The Lord of the Rings, he took on a trio of David Cronenberg features, and led a great number of intriguing films whose entire production budget amounted to, I imagine, less than a day of shooting on Peter Jackson‘s trilogy. Such is certainly the case with one of his recent films, Lisandro Alonso‘s Jauja, which follows Mortensen’s character on a transformative journey.

We said in our Cannes review, that it’s a “strange, beguiling, and excitedly didactic new film,” one that is “pure Alonso, even as it shows him transforming into something else. While Alonso has certainly embraced “narrative” (oh, that dirty word!), it would be laughable to call this anything resembling conventional, reinforcing the director as one of the most exciting slow-cinema filmmakers in the contemporary landscape. A 19th-century period piece, Jauja might be described as a quasi-Herzogian experience into the rocky terrain of the Argentinean desert, but Alonso has made this journey of madness his own thing, a film so possibly deceitful with its ultimate meaning that it’s best to buckle your seatbelts and enjoy the ride.”

Check out the first striking international trailer (which doesn’t have English subtitles yet) below, along with stills and a poster, ahead of a release likely next year by Cinema Guild: A work of tremendous beauty and a source of continual surprise, Alonso’s first film since 2008’s Liverpool is also his first period piece (set during the Argentinian army’s Conquest of the Desert in the 1870s), his first film with international stars (led by Viggo Mortensen), and his first screenplay with a co-writer (poet and novelist Fabián Casas). But the emphasis, as in all his work, is on bodies in landscapes. Danish military engineer Gunnar Dinesen (Mortensen, in a Technicolor-bright cavalry uniform) traverses a visually stunning variety of Patagonian shrub, rock, grass, and desert on horseback and on foot in search of his teenage daughter (Viilbjørk Agger Malling), who has eloped with a new love. Alonso’s style reaches new heights of sensory attentiveness and physicality, driving the action toward a thrilling conclusion that transcends the limits of cinematic time and space. Jauja will be released next year by Cinema Guild.