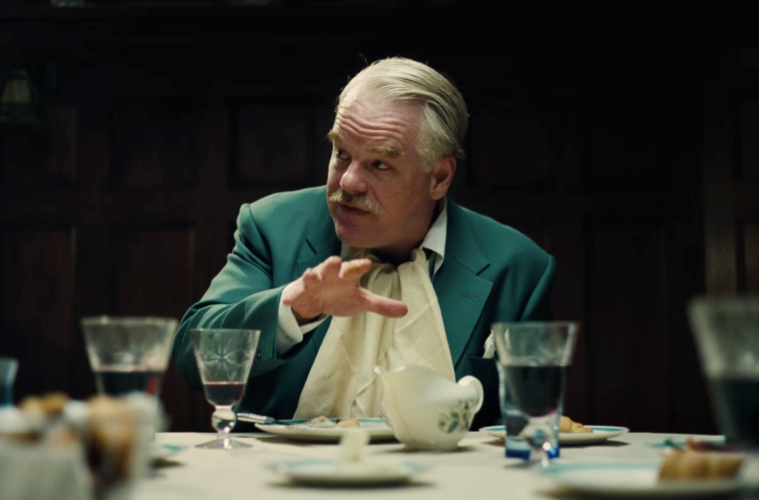 Leave it to Paul Thomas Anderson to keep us guessing, only to surprise everyone. After a flurry of rumors on where The Master would premiere, dating way back to Cannes up though Venice, TIFF and even Fantastic Fest, the director secretly attached his new film to a screening of Stanley Kubrick‘s The Shining at an American Cinematheque screening last night in Santa Monica’s Aero Theater. Yes, quite the double feature.

A source at Hollywood Elsewhere said he saw PTA “lingering in the back [of the theater] before The Shining started” with wife Maya Rudolph. Before Kubrick’s film came on screen, there was the announcement “that there would be a mystery 70mm movie projected as a second feature.” Audiences left after watching Kubrick’s masterpiece and then came back half-hour later to see a 70mm project of The Master, which was reportedly around 150 minutes. So, without further ado check out some of the glowing reactions below, thanks to Movie Parliament and some additional ones from The Playlist.

Don’t want to say more than a few words about it but it is an all around excellent film. If it were me, I’d put them both [Phoenix and Hoffman] in the Best Actor category but if one them is getting the supporting nod, its Hoffman. I’ve yet to see one bad PSH performance but this one may be his best. Will get nods for Picture. Good chance of winning original screenplay and acting awards.

The Master was amazing. Oscars all over this one…see The Master in 70 mm. Looked gorgeous and its the way P.T Anderson wants you to see it.

Just saw “The Master”. A movie has never made me feel quite like this one did. I can’t describe it or even rate it. I am speechless.

THE MASTER is…interesting…I’ll be thinking about it for days#THEMASTER70MM J Phoenix and P S Hoffman are out of this world.

PTA’s best. Not a doubt in my mind. Possibly the best film watching experience I’ve ever had. #THEMASTER70MM Just saw secret screening of The Master with P.T. Anderson and Maya Rudolph in attendance. It’s about much more than Scientology.

Hoffman is one of the finest actors alive. The Master is (more) proof. #themaster

Saw The Master in 70mm at the Aero Santa Monica. Surprise screening after The Shining. Its like nothing yvever seen before.

duuuuuude, the master was goooooooooood I’m still digesting everything I saw, but it was pretty amazing. It was like a strange fever dream. [But] not audience friendly AT ALL. An ambiguous ending and not one likable character. And without any ‘milkshake’ lines, it probably won’t have the breakthrough that There Will Be Blood had. There are three or four scenes between Phoenix and Hoffman that are barn burners. It also containts the best work Amy Adams has ever done.

Phoenix WILL win Best Actor unless Daniel Day Lewis blows us away with [his] Lincoln performance. This is Raging Bull territory for him. Believe it or not, his performance is stranger than that fake doc he made. The only way I can describe him is ‘animalistic.’ (I think the Master title refers to more of a dog and his master. At least that was the vibe I got). The style feels like Terrence Malick by way of There Will Be Blood.

The performances are perfect, the pace incredible, the music generally fitting, the film is an abstract dreamy essay. It is sort of there more to question than answer. It’s a kinda exercise in just picking the audiences brain. Sadly a lot of the audience were complete morons, laughin at completely non funny things. The film has a great humor to it though, a brotherly joviality. It lacks the ‘punch’ I was expecting, but I’m more realizing this film may be perfect. I didn’t really care for “Boogie Nights” first view, but now it’s my favorite movie.
Oscars, I don’t know really, we still have a lot of great movies coming out that will definitely be more audience friendly. This won’t be seen in red America but they need this more than I do.
Yes I bowed to PTA as he entered and then shook his hand and thanked him and followed him to the projection room where he screened the first of many to come of the master. It seems it’ll be one that requires lots of em. @jessecrall (culled together from multiple tweets):

The Master: B+ hazy, meandering story with beautiful staging and headed by Phoenix’s brilliant, year’s-best performance. It’s very ethereal and there’s a lot of graphic nudity. Phoenix is a certain Best Actor contender. He’s a drunk & doesn’t want it. Very stubborn, rage-filled; The film avoids narrative cliches. Some of “The Cause’s” beliefs coincide vaguely with Scient. teaching, and Hoffman acts as a pseudo-therapist. But it’s played straight. It won’t be that controversial religiously, but it’s a daring picture artistically. Don’t want to spoil anything but it’s not a movie that will generate controversial stories on Access Hollywood.

Best of the year so far, though it won’t deserve screenplay nods. Anderson’s visuals and the perfs > story. It’s exceptionally produced with striking images of beaches but the arch of the story + Phoenix are minimal. Never goes astray, though. No excess scenes, no wankery, just deliberate pacing. Anderson delves into the stagnant nature of an alcoholic who is unwilling to change himself; more admirable than complex. Think TOL or Melancholia, although I liked The Master much more than both. S&Sound types will be its biggest cheerleaders. Not a crowd-pleaser at all, but not directly probing enough to move the average viewer. The Master has genius in it. Two scenes which I won’t spoil stand out as decade-best sequences.”

Excerpt from first early review on Thompson on Hollywood:

Formally, “The Master” is gorgeous. 70mm is the way to see the film, if possible. Anderson nails the punchy colors of early 1950s America (a sequence in which Freddie snaps family photos of wholesome, scrubbed youngsters is particularly spot-on), but also the piercingly bright light of the ocean and waterside towns. A recurring shot of the electric blue water in a ship’s wake, like the film’s score, serves as a punctuation point after Freddie’s emotional breakthroughs.

Stylistically and tonally, “The Master” is of a piece with “There Will Be Blood.” The score, the editing rhythms and the simmering violence of the two central characters recalls Anderson’s last feature and its monstrous Daniel Plainview. Where “The Master” differs from “Blood” is its narrative drive. Daniel Plainview has a relentless focus that steers the film down a clear-cut, tragic path. Freddie, however, is hazy and aimless, and this film largely takes its structural cues from those meandering characteristics. Many sequences are focused on Master’s experimentation on Freddie, vignettes comprised of forced repetition exercises seemingly without end. But does all the drawn-out head-bashing help Freddie? This is what the film is asking.

Well, despite our jealousy it certainly sounds like PTA has not disappointed. While we count down the days until release, Time Out Chicago and Cigs & Red Vines have kicked off a campaign to help get the film projected in 70mm at all possible theaters that can handle it. There is some reported struggle between The Weinstein Company and PTA to get the film projected in this preferred format, so head over to their site, get informed and start reaching out to your local theater.