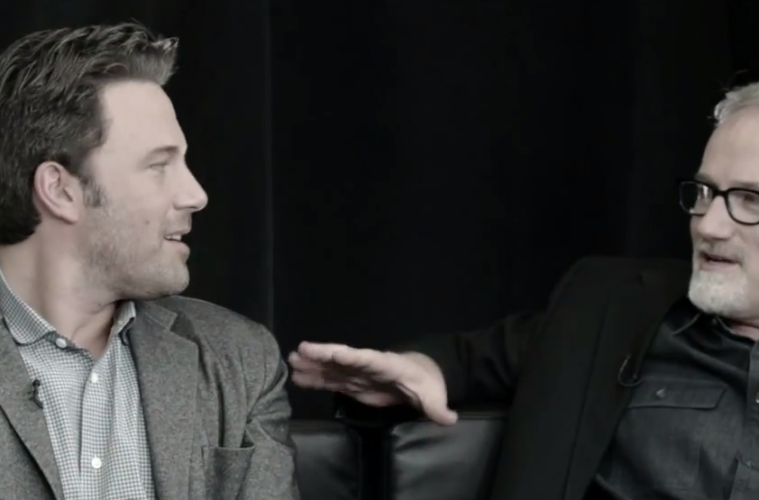 At The Criterion Collection, Guillermo del Toro lists his top 10 (or 21) Criterion films:

In compiling his top ten Criterions, Cronos director Guillermo del Toro had a hell of a time limiting himself. Del Toro humorously bemoaned the “unfair, arbitrary, and sadistic top ten practice,” so instead he decided on ties or rather, “thematic/authorial pairings.”

Watch David Fincher and cast discuss Gone Girl on Cinemax, then listen to our discussion of the film:

At Indiewire, Greg Cwik on why Twin Peaks has remained a part of our cultural imagination for so long:

David Lynch loves using working-class families as denizens of an existential suburban sideshow. All the banality, the filial riffs, the high school crushes and sneaking out of windows, lush green lawns and sapiential trees looming over two-story houses. Nowhere is this more evident than his iconic network television series “Twin Peaks,” co-created with Mark Frost (whose novel “The List of Seven” is actually quite fun and self-aware). The show has pervaded public consciousness to an extent not permitted of most pop-culture phenomena, and its success is, when you stop and think about it, inexplicable. It’s a cult show whose appeal should be fairly limited — a surreal soap opera with shades of horror, helmed by an American surrealist par excellence.

At Film School Rejects, Kyle Turner on why Scream 4 was the harbinger of franchise fatigue:

It’s 2011 and we’re already tired of franchises. Well, at least the throwaway characters about to get gutted in Stab 6 are, as one of them sarcastically writes off Saw IV as “gross, not scary” and lacking “character development.” But then the scene we’re watching pulls out to reveal itself as opening scene to Stab 7, wherein Anna Paquin (who’s watching Stab 6) becomes the exact character type she complains about: “a bunch of articulate teens sit around and deconstruct horror movies as Ghost Face kills them one by one.”