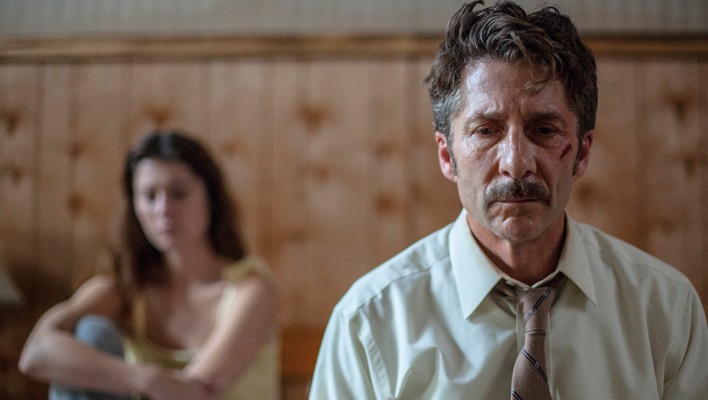 The thoroughly unsettling Faults, in theater this weekend, knows how to push the audience’s buttons in the right order to get the most out of a small budget and setting. The film follows Ansel (Leland Orser), a once-famed cult deprogrammer that is looking at diminishing returns on his success. When a couple find him in hopes that he can work his magic on their daughter, everything tells him it is too good to be true but he takes the money anyways and sets off to help Claire (Mary Elizabeth Winstead) come back to reality from a cult. As he progresses he realizes this might be more than just his toughest case yet.

The film is from debut writer/director Riley Stearns, who gets a powerful performance from Winstead, his real-life wife, and unearths a potential star-turning role for Orser. During SXSW last year, I had a chance to sit down with the trio to discuss their film. Among the topics was the unique draw of the festival, their packed screening, the way they built and used the motel room set, how they landed on Leland for the role of Ansel, how the George W. Bush autobiography lent a helping hand, and much more. Enjoy the full conversation below.

The Film Stage: I was at the screening last night and I’ve got to say that you packed the house. Did you expect that kind of crowd to show up? They literally turned away 50 people.

Riley Stearns: We just heard that.

Mary Elizabeth Winstead: We didn’t even know. We knew people didn’t get in but we didn’t know it was such a big crowd. I don’t think we expected that many people at all.

Stearns: Once we got into South By, I did feel like we were the type of film that could play pretty well —  the type of crowd, the energy and even that sense of humor. But I didn’t think people really knew what the film was at all because nobody had seen it. So the fact that people come out to something that is just buzzed about, but then you’re like, “Where did that buzz come from because nobody has seen it.”

Stearns: I think the only person that Tweeted that they had seen it was David Lowery, who did Ain’t Them Bodies Saints, and he saw a rough cut and gave some little things here and there along with a group of select filmmakers. So that’s the only official buzz that we got. Everything else was proverbial buzz. So yeah, it was a surprise. What did you think, Leland?

Leland Orser: It was exciting to be there and have so many people interested in seeing it. It was really cool to arrive at the theater and see the line of people waiting to get in. It’s great. This is a community and a festival that loves movies.

Have any of you been to SXSW previously? Didn’t you have a short, Riley?

Stearns: It didn’t get in! I’d submitted three things and all three had been turned down. I’m not saying they were wrong. They were probably right. But yeah, this is the first time and I grew up in Austin. I had only been to the music side of the festival. And, you, Mary, Spectacular Now was here but you didn’t come for that.

Winstead: Yeah, I’ve only been for the music. I came in for literally a day and did a show then left. Just an in and out. There were so many people and it was all kind of a blur. It’s nice to be here for a few days and get a more laid back version of what the festival is all about.

Orser: I’ve had films here but I haven’t ever been here before. I’ve always been working. So I’m so glad to finally come. I come to Austin. I have family here. I love it here so it’s really exciting to come here and be a part of this. This Interactive thing though is crazy how many people are here attending that.

It’s funny because when I talk with friends or family about this festival, this is a very unique place and for interactive, especially, this is the biggest thing around.

Yeah! It’s the Comic-Con of interactive. The film side is getting bigger and bigger every year and the music side is gigantic. I mean, if you think it’s crowded now, wait until Tuesday or Wednesday rolls around and you can’t move. So it is this weird hybrid festival with three gigantic mediums.

Stearns: And they’re kind of fighting each other.

Stearns: Maybe it used to work when the film side wasn’t as big but because it’s getting bigger and studios are bringing TV here now.

Stearns: And HBO. And I get that they want everyone to have this experience at the same time. And the infrastructure is here but it is just ballooning to the point where they’ll either have to move the music or movies to one spot or move the interactive to a spot. I just don’t know how it keeps going this way. Which is good for them. It’s a good problem to have.

Transitioning back to the film itself, there are some interesting things going on in Faults. You mentioned last night after the screening that you had really dug into cults and done a lot of research. You turned that into this weird, atmospheric film. And you even ended up on the Black List.

Stearns: It’s a really weird film, especially on the page. I’m still shocked it made the Black List. It’s funny because we had shot this in secret and the script had been passed around before and then boom, we were on this list of unproduced screenplays with a film already made. Whoops.

For Leland, you’re coming into a family effort here. What was the atmosphere?

Orser: It was very touching. I’ll forever be grateful for being invited into their film. This is a family production. Keith and Jess Calder [the producers] got married in the middle of all this. I think of this as Riley’s baby. It was an honor and an enormous undertaking and responsibility. I was there to hold up my part of it and not disappoint. I understood how great the script and character was. It was very freeing and liberating to be doing something for someone else and not just for yourself. It all started with a mustache, by the way.

Orser: I shot this film in New Mexico with Keith and Jess.

Orser: Yeah, The Guest. And I just thought that this guy should have a mustache. I had never had a mustache in my life. So I let my facial hair grow out and I went to a barber and told him to give me a mustache. I looked and thought, “Yeah, this is great.” I showed up in New Mexico with this mustache and I asked if they liked it, and Jess liked it and stared at me.

Orser: They took a picture of me off the monitor on set one day and sent it to Riley.

Stearns: I guarantee that’s why she was staring at you.

Winstead: Light bulbs were turning on.

Stearns: Yeah! I got a text from Keith with Leland on the monitor saying, “Ansel?” I’m sure they were sitting side by side saying, “This is our guy.” And when they said Leland’s name I just thought it was genius. We had gone through so many people and it’s just such a hard role to cast. But as soon as Leland’s name came up it felt right. We had a meeting after he came back from The Guest and we just talked about all sorts of things, including life and a little bit about the script, for an hour and a half over coffee. “So, the part’s yours if you want it.”

Orser: Yeah, you just don’t get scripts of this quality. I read it in New Mexico and was just so impressed.

One thing I noticed, there are a ton of books in the film, especially the beginning. How are those props made? Are they all fake? Place holder and a few real ones?

Stearns: The funny thing about our books is that at the prop house, I guess they had a surplus of the George W. Bush autobiographies that if you opened up our book sleeves you’d see them. I’m not saying the book didn’t sell…

Stearns: But this one prop house has more than enough to fill boxes and boxes of them. But we did have some books that were foam and I think they were even foam versions of the Bush autobiography. The ones you’d use for display at like a Barnes and Noble. We filled some boxes with those so Leland is pantomiming that they’re heavy.

Your production designer designed the hotel room that the film mainly takes place in. What tricks did you use to hide cameras or have walls that could tear away?

Stearns: The ceiling could be moved but it was going to be a half day process. So that wasn’t going to work. The ceiling was tall enough to put lights where we needed to put lights. The walls where the beds are against, those could fly out a bit, but they couldn’t be taken away completely. Once they were set, though, we never moved them. I like to shoot with wider lenses so pretty much everything in the movie is a wider lens and in that space. And trying to treat it like a real space was very important. There were some shots in the bathroom at the end of the movie where we flew the bathroom wall away and got a camera in there and used a longer lens to get a different effect. But yeah, the space was basically a working, functioning motel room. Some of the outlets had electricity.

Stearns: Yeah, we had flowing water from some of the faucets. We tried to make it feel real, but slightly off.