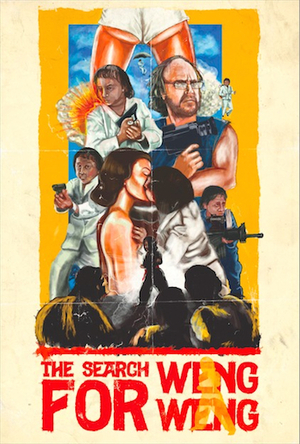 In 2010, Mark Hartley followed up his tribute to Australia’s trashy film past Not Quite Hollywood: The Wild, Untold Story of Ozploitation with Machete Maidens Unleashed, a look at Filipino exploitation cinema from the 1970s and 80s. Director Andrew Leavold delves deeper into the island nation’s film history by focusing on its first superstar, a diminutive action hero with the screen name Weng Weng.

Standing at just two-feet-nine-inches tall, Weng Weng became the unlikely leading man in a number of camp-tastic genre spoofs, including the 1981 James Bondian spy thriller For Y’ur Height Only, which introduced him to a global audience when it screened at the 1982 Manila International Film Festival. The pint-sized sensation then fell into obscurity, forgotten by all but a few cult cinephiles and the Guiness Book of World Records, which lists him as the shortest ever lead man in a motion picture. The low budget documentary traces Leavold’s travels to the Philippines, where he vows to uncover the late actor’s origins and his life after fame. (Weng Weng’s death is hardly a spoiler, as it’s revealed early on by an editor who worked on his films.)

Over the course of 92 minutes, Leavold’s years-long quest unfolds, taking him from the 2006 Cinemanila International Film Festival to the slums of Malibay, Pasay City, where he finds Weng Weng’s brother and only surviving relative. Along the way, he supplies an in-depth examination of a bygone era when Marcos-ruled Philippines boasted the second largest film industry in the world, churning out more than 300 films per year (never mind that many of them are now lost). In accordance, the interview subjects represent an impressive range of the Filipino film community, including directors, producers, and stuntmen, all of whom are more than happy to reflect on Weng Weng – some express awe at his martial arts skills and stunt work, while others, like actor Rez Cortez and film scholar Tilman Baumgaertel, view him as a victim exploited by his producers and adoptive parents, Peter and Cora Caballes. The most notable talking head is the excitable filmmaker and film historian Nick Deocampo, whose eagerness to help briefly steers the journey off course. When Weng Weng’s service as a real-life secret agent comes into question, Deocampo suggests speaking to another larger than life figure, Imelda Marcos. “I can pass on her number,” Deocampo says slyly. The film is then intercepted by the controversial former first lady, who invites Leavold and his crew to attend her extravagant 83rd birthday gala. While the focus on Marcos is completely justified, as her grandiose delusions have, apparently, not waned with age, her clear disinterest in discussing Weng Weng does little to serve the mission.

The Marcos affair is but one of many instances in which Leavold’s indulgences drag the film down. The self-described guerrilla filmmaker often trips up the pace by using overlong film clips that, though amusing, act as obvious filler in the space between the discovery of Weng Weng’s true identity and the climactic visit to his grave. Leavold also provides a generous look at his background as a Weng Weng film programmer, film scholar, and owner of Australia’s largest cult video store, all of which proves his B-movie expert street cred and serves to legitimize his 20-year fascination with a pop culture casualty largely dismissed as a disgrace to Filipino national cinema. Even while others regard Weng Weng as little more than early-1980s ephemera, Leavold asserts that, for him, this is a serious matter.

Cinemanila head Amable “Tikoy” Aguiluz best sums up the experience when, toward the beginning of the film, he states “only a wild man can have this kind of obsession.” Wild man or not, Leavold accomplishes what he set out to do, an admirable feat considering the few resources at his disposal. More importantly, he succeeds in spurring a dialogue on Weng Weng’s role as a representation of the Filipino spirit, which, in the grand scheme of things, is more than any film scholar could possibly hope for.