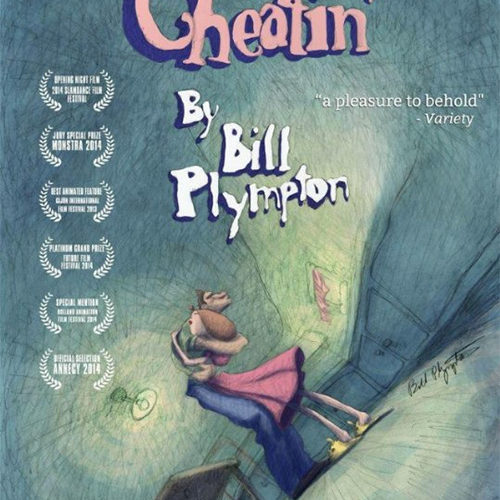 Inspired by the works of James M. Cain such as Double Indemnity and The Postman Always Rings Twice, iconic animator Bill Plympton‘s Kickstarted feature film Cheatin’ is all about sex, lust, love, magic, and sex. His seventh feature film makes its Canadian debut at the Fantasia Film Festival a year and a half after its successful crowdfunding campaign afforded him the budget to personally hand draw over 40,000 drawings. From there each frame was cleaned, painted, and composited by a team of less than twenty people to lend the final work an Impressionistic aesthetic much more akin to the illustrator’s static work than in the past. Set to a full-length musical score by Nicole Renaud in lieu of dialogue, this fantasy depicting two lovers in a perpetual cycle of adulterous revenge is as visually melodic as it is schizophrenically grotesque. You may be familiar with Plympton’s style from three commissioned opening credit sequences on The Simpsons, his Oscar-nominated shorts Guard Dog and Your Face, or his numerous cartoons in such publications as The New York Times, The Village Voice, and Vanity Fair. His prolific career began in the 70s and bears a resemblance to contemporaries like Gerald Scarfe—whose animated sequences in Pink Floyd The Wall utilize a similar fluidity of sexually charged transformations—while perhaps providing inspiration for Everett Peck’s Duckman, Sam Kieth’s The Maxx, and in a lesser sense French director Sylvain Chomet. The characters he draws are elongated with bubble butts, round checks, square muscles, and non-existent waists: all attributes easily malleable into other objects and each other when necessary inside his nightmarish dreamscapes.

As far as Cheatin’ goes, let’s just say the name is quite apt. Honing in on the idea of lustful fantasy and our highly sexualized culture, Plympton introduces his newly created world via a deceptively alluring bookworm named Ella. Out for an afternoon stroll, she’s got her nose so far into a novel that she doesn’t realize the increasing number of males gazing her way with toothy grins and carnal thoughts behind their eyes. Forced into a round of bumper cars, her life’s forever changed by the large and compassionate Jake who attempts to help her escape pursuers young and old despite riding alongside someone we must assume was his girlfriend. In its first bit of irony, all the shenanigans that follow ignite from Ella’s own indifference towards stealing another girl’s man. But hey, love is blind. In come countless minxes doing their best to make Jake stray into their welcoming bosoms—often bare in order to make certain their intentions—and yet he wants no one else but Ella until a deceitful frame job has him believing his new wife has cuckolded him. Desperate to stop his crying and feel like a man again, he partakes in a revolving motel room door of adjective-named women to ease his suffering. Add in a hired hitman, El Merto the magician, and an embarrassed chief of police and the farce spins out of control with displaced consciousness, emotional heartbreak, and electrical rejuvenation to render so much mental anguish and psychological scarring moot as if we were watching a children’s story devoid of consequences. Somehow it doesn’t even feel trite either, but that could just be a result of the mesmerizing visuals.

There’s a messy beauty to the scribbled hatching and extremely loose shapes jittering in their imperfections from one frame to the next. Renaud’s original score mixes in songs such as Verdi‘s “Brindisi” from his opera La Traviata and Ravel‘s “Bolero” that you’ll recognize and begin swaying to while all sorts of insanity appear onscreen. Ella and Jake actually lip-synch “Brindisi” as their whirlwind romance morphs into dancing babies from the tornado-ravaged throes of honeymoon night, giving everything a light, comical touch despite the drama of the heart before and after. And if you see something suggesting sexual innuendo whether a fireman embodiment of Jake rescuing Ella with his draining hose poised at the hip or the polishing of a curved automobile headlight: it is. Cheatin’ is none too subtle where sex is concerned. But the way Plympton executes this thinly veiled subtext is perfectly left of serious. We laugh at the joke posed to Jake that begins his infidelity, at his tears, and even Ella’s fantasies of murdering everyone. Its absurd depiction allows this luxury and may even drive home the theme of love’s unbreakable bond more. The mistresses’ movements are playful and over-the-top, Ella’s magical coping mechanism clichéd and far-out, and the whole endeavor is shrouded under a surreal sheen of screwball comedy and jealous, lustful melodrama. The story may be too loose for my liking by the end, but it’s overshadowed by the unique aesthetic and impressive artistry. Neither lead is likeable as we revel in their pain, but the prospect of a happy ending is still appealing if only to sadden the vultures surrounding their derailed marital bliss.