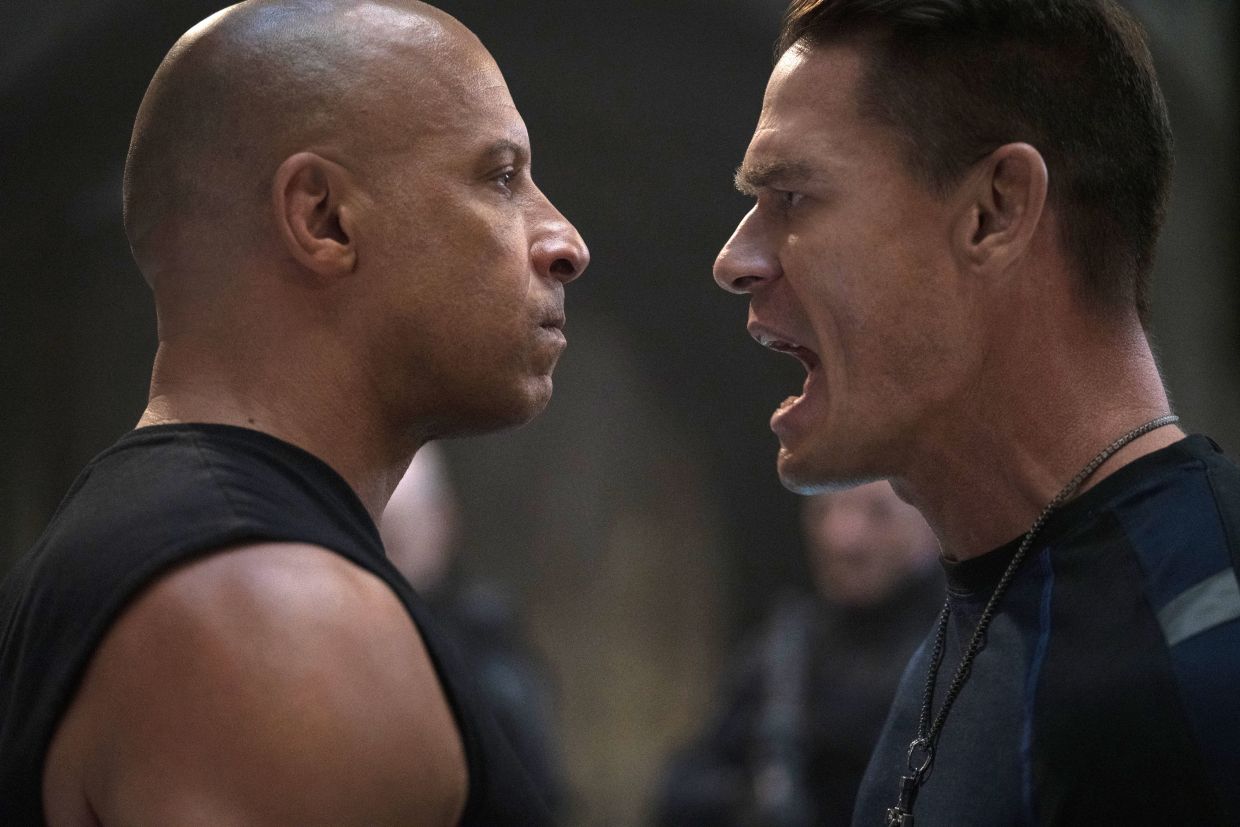 One-upmanship is the name of the game in the Fast & Furious franchise, from its humble carjacking beginnings to its globe-trotting (now globe-circling) feats of saving the world from the MacGuffin du jour. While its plotting implausibilities and character invincibility have always been part of the joke—never more so with its latest entry—each iteration has methodically upped the ante to some ridiculous next stage. Franchise veteran Justin Lin’s F9 follows suit, yet the prior film’s creakiness becomes expounded here. This is an adventure grasping at straws at every turn—stuck between fulfilling its grounded ideas and striving for franchise-topping action, everything feels like it’s running on fumes.

Series newcomer John Cena (seemingly filling the pro-wrestler-turned-actor slot) plays Jakob Toretto, brother to Vin Diesel’s Dom Toretto, who is apparently estranged enough that he hasn’t been mentioned once over 20 years. No matter: the relationship is now the major throughline of the script by Daniel Casey and Justin Lin. As such, a hefty chunk of the 2.5-hour runtime comprises unnecessary flashbacks to fill in their traumatic backstory of sibling rivalry. Surprisingly, in a franchise where outer-space is now the limit, they opted against de-aging and instead cast other actors as Dom and Jakob (Vinnie Bennett and Finn Cole, respectively). They both do decent enough jobs, but it’s easier to get caught up with how they embody their future selves than getting emotionally involved in the family quarrel. When we’re not getting to the bottom of what ripped them apart, we’re back with a whole range of familiar faces (a few we haven’t seen in quite some time) to pad out a by-the-numbers story with superfluous subplots.

Lumbering along like a vehicle in need of a tune-up, the narrative involves an orb-like device that could cause the end of the world, with superspy Jakob and his crew racing to track it down. With an A-to-B plot that’s as laughably lazy as it is simplistic and some dubious editing to keep things moving along, the long-held mantra of the franchise to ignore any nitpicks and just go along for the ride is put to the test. While that notion was all well and good in the franchise high-point Fast Five and the by turns ridiculous and affecting Furious 7, much of this ninth entry comes across as borrowed, not only from past iterations but other action films as well, with two separate Christopher Nolan setpieces coming to mind. The franchise’s base pleasures are still present––Dom’s one-liners about the be-all, end-all importance of family, clinking Coronas, models dancing in slow-motion around cars, a high-octane, third-act set-piece this time akin to Burnout‘s Showtime mode, with added magnets––but there’s that unshakeable notion of simply going through the motions.

Even the comedy of Roman (Tyrese Gibson) and Tej (Chris “Ludacris” Bridges) feels like left-over scraps from the writer’s room a few films back. Their banter can’t manage to carry the franchise’s most outrageous set-piece: the one that fans have been begging for, yet proves quite dull in execution. And Cena, who offered up charismatic playfulness in Blockers, isn’t able to bring a level of brawny magnetism that other franchise stars like Dwayne Johnson and Jason Statham could deliver, leaving a rather flat impression. One of the few characters who match the kind of ridiculous, eye-winking tone the rest of the movie sorely lacks is Helen Mirren’s Magdalene “Queenie” Shaw, mother to once-villains Owen and Deckard. Her gleeful mid-robbery sequence ever so briefly knocks the film out of its doldrums as she delivers some connect-the-dots exposition to Dom in entertaining fashion.

With characters now verbally wondering why they always come out of each gravity-defying sequence unscathed, the franchise is hoping to reach a level of critic-proof self-awareness as it eyes its finale in the eleventh film. Unfortunately, F9 reveals that issues lie far beyond the invincibility of its characters. Slathered in nostalgia for past moments in the franchise yet still introducing entirely new backstories, this humdrum antepenultimate adventure leaves one convinced those steering the series don’t have a firm grasp on where it’s heading.