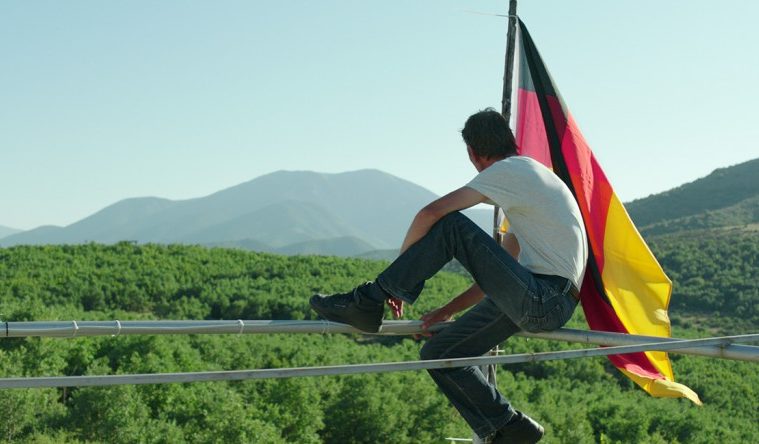 One of the most compelling, intense character studies I’ve seen in a great while is Western, which made its premiere at last year’s Cannes Film Festival. After a festival tour which included Karlovy Vary, TIFF, NYFF, London Film Festival, AFI Fest, and many more, Valeska Grisebach’s drama will now arrive in theaters this month courtesy of Cinema Guild. Ahead of its opening on February 16 at the Film Society of Lincoln Center, we’re pleased to premiere the official theatrical trailer.

The long-awaited return of the director whose last film was 2006’s Longing, Western–produced by Toni Erdmann director Maren Ade–follows a group of German construction workers in a remote Bulgarian town. Specifically, Grisebach centers on Meinhard (Meinhard Neumann), who finds himself out of touch with the masculine environment and the subtle, growing hostility from the other men.

Our own Jake Howell loved it at Cannes, saying in his review, “Western implies a cinematic reference—a genre, in and of itself. A genre, to be clear, with tropes galore that are just as problematic as the industry that propagates them. In titling her film as such, however, Valeska Grisebach’s contemplative, brilliant film sparks a dialogue on all of these components, prompting us to think critically on their intersections.”

See our trailer premiere below, along with the poster.

An intense, slow-burning thriller, WESTERN follows a group of German construction workers installing a hydroelectric plant in remote rural Bulgaria. The foreign land awakens the men’s sense of adventure, but tensions mount when, Meinhard, the strong, silent and newcomer to the group, starts mixing with the local villagers. The two sides speak different languages and share a troubled history. Can they learn to trust each other-or is the stage being set for a showdown?

With sweeping cinematography and tightly modulated pacing, WESTERN tells a universal story of masculinity and xenophobia on the contemporary frontier of Eastern Europe. Drawing remarkably nuanced performances from a cast of non-professionals, Valeska Grisebach uses the trappings of the western genre to poke and prod at current anxieties about borders and our relationships with our neighbors.

Western opens on February 16 at the Film Society of Lincoln Center and will expand in the coming weeks.