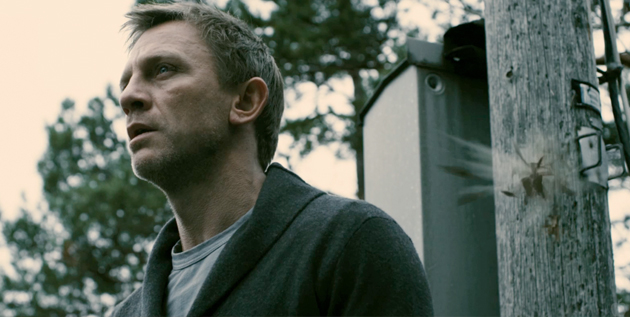 If you’ve been following Mouth Taped Shut (on Tumblr and Twitter), then you know it is more than just a diehard fan getting excited for the “feel bad movie of Christmas.” They’ve been posting exclusive photos and videos from the set of David Fincher‘s upcoming The Girl with the Dragon Tattoo adaptation. They sent out a set of mysterious tweets the last few days hinting at events going down in major cities across North America. I’m here in Canada covering the Toronto International Film Festival and was invited to a Straw Dogs screening where we were treated with the surprise: an 8-minute extended trailer full of new footage and score.

The excellent hard-hitting teaser is vastly expanded here, in order to introduce us to the many characters in this ensemble, while raising the mystery in the final moments. We follow journalist Mikael Blomkvist (Daniel Craig) investigating a murder in the Vanger family decades ago, while we also meet the cryptic Lisbeth Salander. Played by an astonishingly skinny Rooney Mara (speaking in a Swedish accent), she deals with her abusive boss and gets entangled in the murder mystery. These two story strands coalesces in the stand-out shot from this trailer. We hear Blomkvist requesting help with the investigation and Fincher punches in on the back of Salander sitting cross-legged on the floor. In a single-shot, the camera swoops up behind her neck and over her head to reveal a solemn face drenched in ravishing red light. Off the bat, the score from Trent Reznor (who won the Oscar for Fincher’s The Social Network last year) immediately impresses. The first six minutes of the trailer is more of his ambient work, with one section using a single repeated piano note to build tension. The final moments of the trailer ramp up akin to the earlier teaser we got, with flashes of stirring images from dead bodies on the floor to nightclub scenes and ending with Salander on her motorcycle exiting a tunnel, filling the frame completely white. This last string of shots are guided by a heavy drum beat and quick guitar strums.

Fincher’s keen sense of framing is here, along with his overall dark tone. We get a new glimpse of the parade/murder flashbacks in the film, where he uses a high-contrast, yellow tone to distinguish from the bleak present-day. He is taking this story known in the original books and Swedish film adaptations, but adding his sense of complete control over the material. While the first trailer would give you the idea this is rapid-fire execution akin to The Social Network‘s early coding scene, it is not. We are privy to a few sections and Fincher seems to be taking the slow-burn method, letting this mystery unravel with patience. While no assumptions can be made on the final product from this piece, it is clear that Sony is on the right track when it comes to putting out captivating promotional material. We have no word on whether this trailer will be released online anytime soon, so follow Mouth Taped Shut for what has already become one of the more alluring campaigns in recent years. Alex Billington from First Showing and I recorded our immediate thoughts of the footage, which can be seen below and you can read his write-up here. The Girl with the Dragon Tattoo hits theaters on December 21st, 2011.