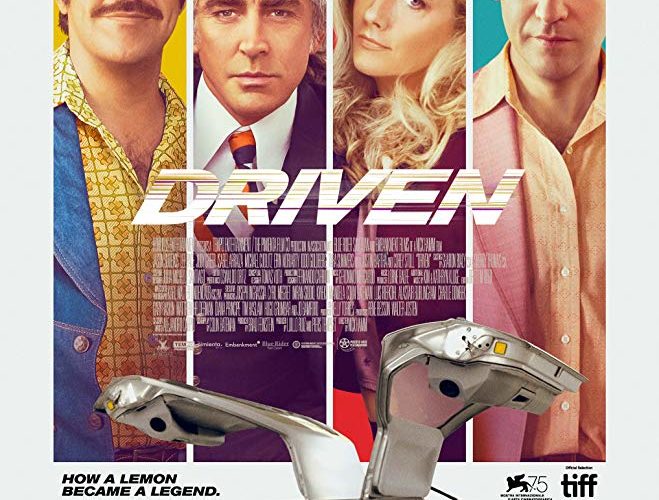 There is a wonderful moment in Driven, the story of controversial carmaker John DeLorean’s headline-grabbing 1980s rise and fall, that encapsulates the film’s melding of comedy, tension, and history. A series of misfortunes have brought together DeLorean (Lee Pace)–the designer of the iconic car that Marty McFly would eventually use to travel through time–and a delightfully mustached moron and FBI informant, Jim Hoffman (Jason Sudeikis). A plan has been hatched to ensnare the unsuspecting DeLorean in a drug deal. But it cannot move forward unless DeLorean has the money to make it happen.

Hoffman is frantic, as well he should be. Earlier in the film, the husband and father was arrested for piloting a plane filled with cocaine. A federal agent (an ever-irritated Corey Stoll) offers Hoffman a chance to avoid decades of jail time in exchange for the life of an informant. Without telling his wife (a bronzed and stellar Judy Greer), Hoffman agrees. His new life places him next door to a charismatic genius with a George Hamilton-tan, a mop of white hair, and an air of aloofness: John DeLorean.

Pace, the uniquely talented star of TV’s Pushing Daisies and films like The Fall and Guardians of the Galaxy, is well-suited to the role of an eccentric genius. That eccentricity is both appealing and a bit scary to those around him, including Hoffman. DeLorean was on the verge of moving forward with the strangely glorious car that would bear his name, and Hoffman is eager to join the inner circle. Eventually, DeLorean finds himself in financial difficulty, and that is when a stressed Hoffman sets the fateful plan in motion.

Back to the wonderful moment. An increasingly stressed Hoffman calls DeLorean and asks, “Do you have the money?” DeLorean assures him that he does, and Hoffman breathes a sigh of relief. The plan can move forward, the carmaker will be caught, the informant will be cleared. Then Hoffman’s phone rings again. It is DeLorean: “I don’t have the money.” It’s a truly hilarious sequence, and perfectly acted by Pace and also Sudeikis. The latter actor has had a mixed run post-Saturday Night Live, but Driven counts as a high point. He plays Hoffman as a likable idiot, a family man with good intentions who is nevertheless on a straight path toward f’ing up.

It was that moment above, especially, that made me think of the HBO original films of the 1990s. Well before Tony Soprano cruised down the Jersey turnpike and long before Ned Stark was brutally dispensed with, the channel was as well-known for its original movies as it was for compelling series. These were often made-for-TV films with strong actors and ripped-from-the-headlines plotlines. Think Barbarians at the Gate, starring James Garner as the embattled CEO of RJR Nabisco, or The Late Shift, a dramatization of the Leno-Letterman battle for The Tonight Show.

In its entertaining melding of fact and fiction, its occasional obviousness, its solid group of character actors, and its deep appreciation of the dramatic possibilities of hubris, Driven is prime 1990s HBO material–and that’s a good thing. Irish filmmaker Nick Hamm’s comic drama would’ve killed it on a Saturday night slot in that era. When it comes to a 2019 release, it still hits most of the right notes to be a modest success.

The film leads to some courtroom showdowns and a few interesting twists, especially for those unfamiliar with the eventual fate of DeLorean. The strongest elements, throughout, are the performances of Pace, Sudeikis, Greer, and Stoll. Perhaps the weakest element of Driven, however, is its title. Such an anonymous moniker does not help the film stand out, especially since moviegoers of a certain age will hear Driven and think of Sylvester Stallone driving a Formula One vehicle. Nonetheless, while its title may not linger in your memory, Driven is a well-told, strongly-acted drama with real heart.

Driven is in theaters and on digital/demand on Friday, August 16.