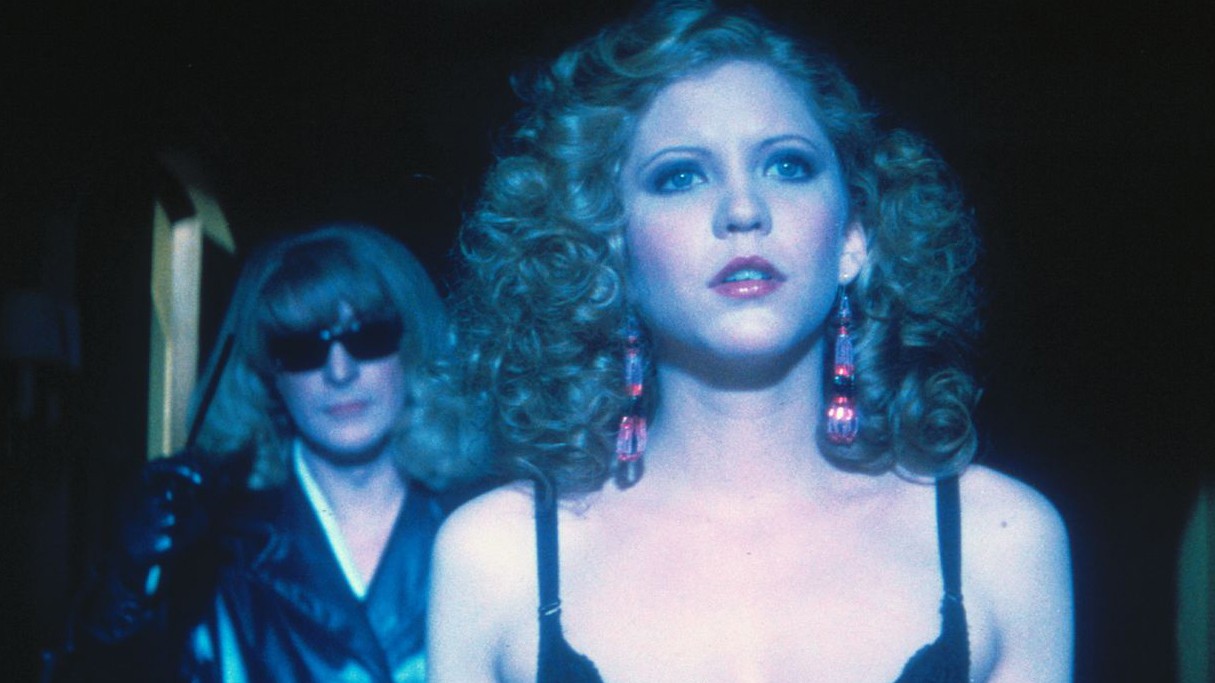 “It’s very dirty, and I know dirty.” Near the end of Brian De Palma’s oneiric exercise in sleaze, Dressed To Kill, high-class prostitute Liz Blake (Nancy Allen) recounts a recurring dream where she strips in front of a phantom intruder before he puts a razor blade to her neck. It’s remarkably similar to the film’s first scene — a dream sequence where a showering Kate Miller (Angie Dickinson) vainly attempts to attract her shaving husband’s attention, only to be murdered behind a thin veil of glass.

This time, it’s notably described in real-time as Blake’s voice becomes shaky. She’s a women who’s used to sexual kinks, but this dream is something more confusing. It’s threatening, but also cathartic in the details.

But for a film obsessed with the presence of skin and the possibility of sex, Dressed to Kill is excessively prude — an echo chamber of repression for a group of characters who are teased with forms of pleasure and never fulfilled. Over and over, the release is only implied, whether it’s through forces of violence, self-actualization, or sex.

And, in the tradition of De Palma films such as Sisters, Carrie — and even later entries (e.g. The Black Dahlia) — Dressed to Kill finds an ultimate shame and gravitational fatalism in performed sexual desire. Just as Sisters‘ Danielle awakens her alter ego, Dominique, in the throes of passion, Dressed to Kill‘s characters are doomed to their own end whenever they try to push out of their basic conceptions of themselves.

De Palma keeps Miller’s interior life purposely vague, offering an eye in the corner during a therapy session where she talks about her marital issues with her therapist (Michael Caine), but, also more significantly, bringing out a persistent ennui in her day-to-day life through restless body language.

The masterful ten-minute gallery set piece, for instance, is first positioned as a scene of meditation as she absentmindedly gazes around the room, looking back and forth between the paintings in the room and the people around her until Pino Donaggio’s serenely swirling score ebbs and flows with her own rising passions. Inattention is replaced by a desire for the chase as she coyly tries to grab the attention of her potential suitor before weaving around his figure in the crowded gallery. Miller is starved for connection, whether it comes from her husband or a romantic stranger who wants to whisk her away into a dream. But that realization of fantasy comes at a steep price.

De Palma’s nothing if not a cruel trickster in his views of romanticism, cutting short Miller’s fairytale daydream with the bitter irony of a venereal disease revelation and a final attack by the manifestation of her own sexual anxiety — a black-coated unknown with a razor blade, not unlike the one her husband was using in the first scene.

The horror and thriller genres have had a long inclination for murdering “virginal” women who compromise their perceived purity, but Dressed to Kill feels less like a matter of puritanical punishment, more a passing of the torch to the film’s most subversive aspect, Blake’s character, and a more unlikely case of repression.

Blake is the antithesis of the archetypal “last girl,” a young women who’s both unabashedly sexual and blissfully self-involved. And De Palma has no interest in simplistic tropes of “a whore with a heart of gold” or equally condescending conceptions. In one of the few moments of narrative down-time, Blake isn’t shown as a role model of purity, but rather multi-tasking two different business deals.

In one conversation, she’s trying to set up a high-profile escort, pleading with her boss that she needs the money for her mother’s surgery, while, in the other conversation, she’s talking to a stock broker about buying a hundred shares of an up-and-coming company with that same windfall.

Even then, Blake is also beholden to the same feelings of restraint and withheld pleasure, whether it’s coming from her inability to do her job because of a murderer on the loose, or her own blithe treatment towards sex or love. It’s telling that the film’s closest thing to a partner is Peter Miller (Keith Gordon), a teenage boy who Blake views with near asexuality.

Finally, Michael Caine’s character — undeniably where Dressed to Kill becomes more dicey. On the surface, there’s a toxicity to the treatment of transgender characters, especially in the film’s bygone conclusions about mental illness and a propensity for violence. This was a different era, one that was far less kind to trans representation. But, within the context of the film, the murderer’s transgender identity feels less like a separate entity than a thematic prop through which the other characters understand themselves. That’s not an excuse to say that it makes the character’s representation fine, but rather a recognition that the film is failing to recognize the character as their own person with motives and desires, beyond a boogeyman-like presentation of a murderer.

Equally, in modern eyes, there are few scenes more controversial than the lengthy discussion between Blake and Peter about the definition of transgender. It contains plenty of moments that are difficult to reconcile with modern understandings, like a line about gender reassignment surgery that’s almost certainly played as a male-anxiety joke. But there’s another reading of the scene.

Even after a traumatic experience where all of these characters have been put face-to-face with their own repression, nothing has changed. They continue living their lives with a constant anxiety, as repeated by the final scene where Blake is again plagued by the same manifestation that haunted Miller at the film’s start. Their lives are still destined to be controlled by insinuations.

Continue reading our career-spanning retrospective, The Summer of De Palma.