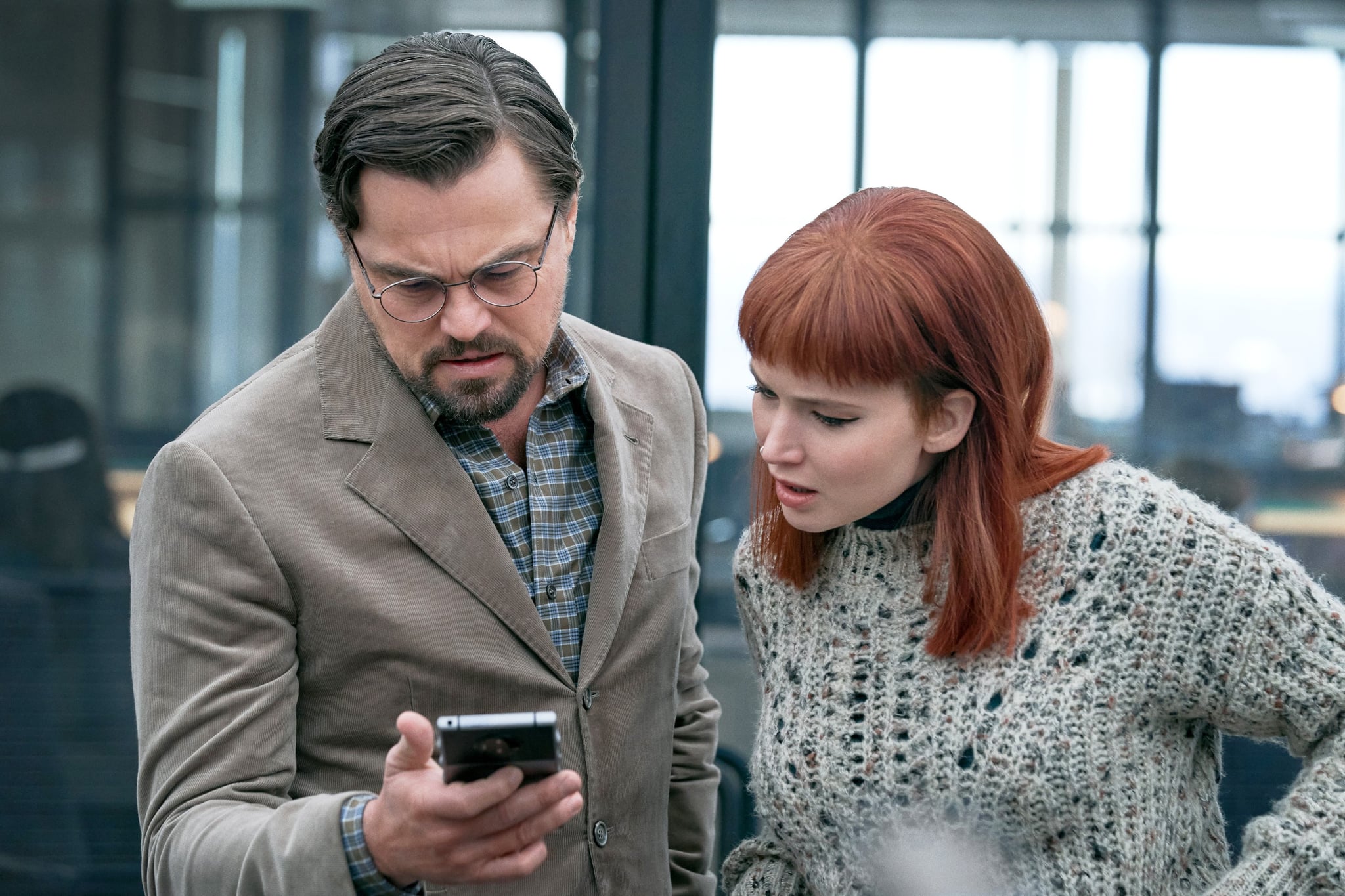 Articulating why it’s easy to agree with writer-director Adam McKay’s politics while disliking his films isn’t so hard. Though a smart man who can hold his own riffing with Felix Biederman on a Chapo Trap House guest appearance—and also responsible for some of the funniest movies of the past 20 years (Anchorman, Step Brothers)—there still seems some limitation to The Big Short and Vice as both satire and political tracts. If it bears the fault of preaching to the choir’s anger more than offering real structural critique, one has to begrudgingly admire some qualities of his newest film, even as being annoyed for a good portion of the runtime is still expected.

The first of his new era neither based on nor inspired by a true story, Don’t Look Up takes place in an unspecified year within the current socio-political hellscape where, one night within Michigan State’s astronomy department, Ph.D student Kate Dibiasky (Jennifer Lawrence) discovers something while conducting a fairly benign look through the ol’ giant high-tech telescope. Her senior, Dr. Randall Mindy (Leonardo DiCaprio), does calculations and confirms that what she caught is in fact a planet-destroying asteroid headed towards earth.

They try to gain the attention of President Orlean (Meryl Streep), a female Trump analogue who can’t make much time to think about the asteroid due to the forthcoming mid-terms and a sex scandal involving her Supreme Court pick. Thus having to take a media tour to convince the public at large of the looming threat, Kate quickly blows her reputation with lack of television-friendly tact during a morning talk show appearance. Yet Mindy’s midwestern folksiness and “handsome face hidden under a beard and glasses” thing (Leo isn’t totally ready to play his first schlub yet) transforms him overnight into a Dr. Fauci-type celebrity who draws attention to “science” but doesn’t inspire much in the way of actual change, leaving the asteroid a problem they have to get the entire world behind.

Cleverly rendering the two astronomers as stand-ins for his own earnest alarmism and “make the medicine go down easy with some gags” personalities—let’s say Hollywood’s new Oliver Stone—you get a sense of McKay making a self-satisfied, if noble attempt to rummage through the lingering trauma of the first year of the (sadly ongoing) pandemic and make sure we don’t make the same mistake twice with our looming climate-change catastrophe. If an improvement on his two previous films, Don’t Look Up still bears faults. Maybe it’s unfair to criticize timing when films take so long to make and our problems accelerate so rapidly, but there’s something odd about a movie shot in the first months of the Biden era that takes more shots at the science-denying Donald Trump’s former Presidency than political action being rendered purely into “vote!” slogans by the spineless, corporately controlled Democratic Party who currently control Congress and the White House.

Even as some satire doesn’t totally land there’s the big plus of it being genuinely much funnier than McKay’s other prestige films, if chiefly due to excellent comedic performances—Mark Rylance channeling the voice of Herbert from Family Guy for his Elon Musk/Steve Jobs analogue, or a giggly Jonah Hill as a further failing-upwards version of Jared Kushner. And while an early scene frantically cutting around President Orlean’s office seems a worrying sign that McKay’s typically hectic editing patterns and docudrama hand-held have gotten even more grating, the film eventually situates itself firmly in a media onslaught of Twitter, YouTube, and TikTok, creating a more coherent visual language than usual.

The fusion of star-studded satire, science-fiction, and apocalyptic doom begins to recall Richard Kelly’s recently reclaimed Bush-era cult classic Southland Tales, yet the difference between the two feels instructive. Kelly’s film made fewer criticisms of where our priorities lie, and was instead prescient about how overstuffed modern life was slowly transforming into something resembling channel-surfing, to which the Great Reset of an apocalypse was maybe the only answer. McKay’s media satire extends mostly to soothing celebrity culture taking precedence over the important issues, something that would’ve felt stale about five years ago. One of course can’t forget Vice having a post-credits sequence where Dick Cheney’s ascension was partly blamed on millennials who liked the Fast & Furious movies.

It seems that, despite McKay’s pretty left-wing views (for a Gen X Hollywood comedy guy), he still seems to lean a bit too much into the centrist smugness of “it’s the smart people vs. the stupid people,” which in and of itself breeds reactionary thought in the population. Perhaps it’s too much to ask of a feature film to interrogate the emotional complexity of denialism beyond being the fault of demagoguery and corporate media, but it still seems to shortchange the film’s critique. The reductive dramaturgy feels perfectly represented in DiCaprio’s character monologuing about how “the President is lying” on television, which ultimately is closer to the treacly liberalism of, say, Rob Reiner’s Shock and Awe than the edge of the aforementioned Southland Tales or even the holy grail of Dr. Strangelove.

It’s not for nothing that its bummer climax lands—maybe turn off the movie before the two goofy post credits sequences—if in part because of the defeatism, which is rare for a year-end prestige product. Once a sense of fruitlessness to the astronomers’ mission kicks in, even before the predetermined end, Don’t Look Up starts to earn a lot of goodwill, if simply because it begins to be laser-focused and genuinely melancholy. You begin to think perhaps it was up to something more complicated than just a “rallying cry” the whole time.