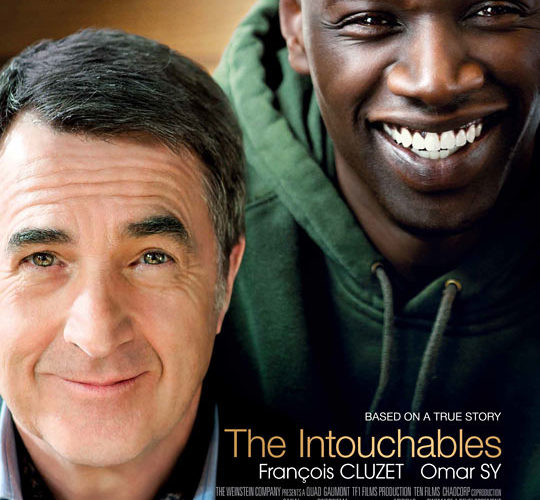 The Intouchables took Europe by storm last year both commercially and critically and now that it has landed stateside. It’s easy to understand why; it’s the rare crowdpleaser that is not only funny, but has a tremendous amount of heart and even a little bit of an edge to it. Dealing with a character who is physically handicapped is a dicey proposition in the world of film, either played very solemnly or insultingly comedic, but The Intouchables manages to find the right balance thanks to a great script and two leads with off-the-charts chemistry and rapport with one another. Driss (Omar Sy) is an aimless man living in the slums of Paris who just wants to get by doing very little. In order to get a signature that would allow him to get on unemployment, he goes to interview for a job as caretaker for the wealthy but quadriplegic Philippe (Francois Cluzet) and completely botches it on purpose. But Philippe sees something in Driss and respects the fact that unlike the other caretakers interviewed, he didn’t take pity on his situation and try to baby him. Soon enough, Driss is hired on a one month trial and after a shaky start, the two quickly become friends and begin to grow as people because of it.

The Intouchables turns heavy subject matter into comedy gold largely thanks to the chemistry and delivery of Sy and Cluzet. The two make an excellent comedic team, and it’s almost a joy in and of itself just to be able to sit back and watch them trade barbs with one another as the movie progresses. The two also bring major weight to their roles when the dramatic situations call for it, with Cluzet bringing a sadness to Philippe that’s always present even during more comedic bits. When his sadness comes out in emotional outbursts and late night talks with Driss, the film easily slips into dramatic territory without skipping a beat. The sense of humor is wonderful and will probably raise many eyebrows in the states. While there is a lot of broad humor (mostly in their differences of taste), there are also a lot of jokes made at Philippe’s expense which, if handled the wrong way, could be borderline insulting. But the script’s tone keep it from being so; instead of being insulting, it’s accepting. Driss doesn’t pity Philippe and, in turn, he doesn’t hold back when cracking about him being a quadriplegic. His acceptance of Philippe despite all of that allows the audience to be able to laugh at the off-color jokes that result from their friendship.

The Intouchables is the sort of movie that would not work had it been made in the United States, but somehow France unlocked the secret of making a film about a poor black man and his quadriplegic aristocratic friend that is not only ridiculously funny but also emotionally effective and crowd-pleasing. Much of it is due to the tremendous work of Sy and Cruzet, who work so brilliantly with one another that I hope they end up doing more movies together in the coming years. I know that the premise sounds like the sort of dumb comedy you usually want to avoid, but this has way more going for it. Europe knows it, The Weinstein Company knows it and now it’s time for you to know it.

The Intouchables is currently screening at DIFF and hits limited theaters on May 25th, 2012.