‘Diary of the Dead’ and George A. Romero’s Formal Self-Awareness 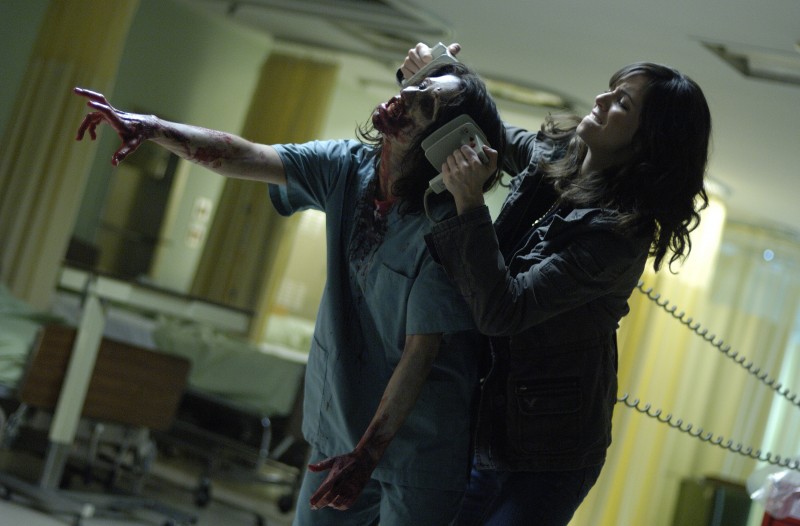 For spanning half a century and six films to date, George A. Romero’s Dead series could reasonably be labeled the most ambitious single-auteur franchise in horror. Beginning with Night of the Living Dead’s release in 1968, this sequence is linked by its various uses of zombie uprisings as a vessel for sociopolitical critique. Night found as its inspiration Richard Matheson’s classic 1954 novel I Am Legend, a sci-fi horror tale that places its isolated protagonist within an apocalyptic world of humans-turned-vampires; surely, Matheson’s text posits an early sketch for the contemporary zombie, and Romero’s film cements that concept by replacing the novel’s creatures with reanimated corpses. Before Night of the Living Dead, the zombies of horror cinema aligned more directly with an origin in voodoo ritualism. Consider, for example, Victor Halperin’s White Zombie (1932) and Jacques Tourneur’s I Walked with a Zombie (1943), a model Wes Craven later revisited in The Serpent and the Rainbow (1988).

Night of the Living Dead’s notoriety stems not only from its genre-related development, though; rather, it stands as a tentpole achievement of independent filmmaking, boasting rich black-and-white cinematography, a calculated development of tension, and insights into the angst of its contemporary zeitgeist, particularly ongoing battles for civil rights and vehement protests of the Vietnam war. Romero’s political intuition carries through Dawn of the Dead’s critique of then-burgeoning rampant consumerism, Day of the Dead’s thoughts on militarism and scientific ethics, and Land of the Dead’s proto-Occupy evaluation of late capitalism’s ludicrous wealth disproportions.

Enter 2007’s Diary of the Dead, a film as deeply political as its predecessors, but characterized by a uniquely pronounced formal self-awareness. After Land saw major studio development under the banner of Universal Pictures, Diary finds Romero reevaluating the kind of micro-budget conditions that produced Night of the Living Dead. It calls attention to the sensibilities that have overwhelmingly haunted mainstream horror since the release of two genre-shaking titles in the late 1990s: Wes Craven’s Scream and Daniel Myrick and Eduardo Sánchez’s The Blair Witch Project. Romero taps into the postmodern auto-critique of the former, and the subjective “found footage” aesthetic of the latter. It is worth noting that 2007 sees a general resurgence of the found-footage genre, bolstered most loudly by the premiere of Paranormal Activity, as well as Spain’s highly regarded [REC]. But as a rigorous self-evaluation and confrontational engagement with contemporary technology, Diary stands out. Romero’s film is forward-thinking genre cinema, as opposed to a work of simple reaction (Paranormal Activity mostly recycles the Blair Witch model) or homage ([REC] openly evokes the early works of the auteur in question).

Indeed, an accurate description for Diary of the Dead is less “found footage” and more “mock documentary.” The film’s voiceover alleges that it has been edited by Debra (Michelle Morgan) from various sources, including footage shot by her boyfriend, Jason (Joshua Close). The “documentary” also includes coverage from surveillance cameras, along with additional footage from Debra and Jason’s film-school classmates. Romero regularly calls attention to his own film’s fictitiousness. Debra’s opening narration lays bare the film’s methods of production: “The film was shot with a Panasonic HDX-900 and an HBX-200,” she says. “I did the final cut on Jason’s laptop. I’ve added music occasionally for effect, hoping to scare you.” Shortly after this reflexive admission, Diary sees Jason guiding the production of a mummy-themed horror film; in true post-Scream fashion, the scene incorporates Tracy’s (Amy Lalonde) incisive critiques of generic sexism: “Can somebody please explain to me why girls in scary movies always have to, like, fall down and lose their shoes and shit?” she asks in exasperation. “It’s totally lame. And why do we always have to get our dresses torn off?” Romero furthers this self-awareness when a climactic scene mirrors the droll opening: now, the mummy-costumed boy chasing Tracy really does mean to hurt her, and she voluntarily disposes her shoes before her dress is torn.

What sets Diary apart is not simply its acknowledgment of itself as mock documentary, but a sustained and attentive scrutiny of itself as a cinematic object. It also conducts a genuinely complex study of information overload in the age of digital technology. Romero gets away with skillful editing and composition by attributing his subjects with backgrounds in film. In providing this character information, Romero also justifies his film’s incorporation of highly stylized montages, which consist of overlaid newscast footage and narrations alongside Debra’s sharply political commentary. The formal self-awareness plays out even more powerfully in an emphasis on individual images: multiple scenes find subjects recording each other on handheld cameras, so that the audience is watching itself watching. Romero, highly critical of digital media’s fallibility, mirrors these images with one striking shot that finds the camera pointed similarly into the barrel of a National Guard member’s rifle. This explicit visual metaphor speaks to the film’s questions about the merits (or lack thereof) of documenting violence —“There will always be people like you,” film professor Andrew Maxwell tells Jason, “wanting to document, wanting to record some sort of diary.”

Yes, Romero is well aware of the pun on “shot” that goes along with recording brutal imagery, and he makes his auto-critique clear. It seems that Romero has no interest in subtlety, stationing himself instead within the territory of direct confrontation. This is a film of unavoidable conflicts, rendered all the more indelible through its horrific imagery. One especially disturbing episode finds Debra revisiting her suburban home to find her undead mother feasting on her father’s flesh, before being attacked by her young brother. The paradoxically “sophisticated” and “savage” Maxwell dispenses with the boy using a bow and arrow. Indeed, as the oldest major character in the film, Maxwell might well be Romero’s stand-in – erudite, pessimistic, and wryly humorous, he acts as a guardian and lovably cynical overseer of the young adults’ journey. One telling scene shows Maxwell discovering a first edition of Charles Dickens’s A Tale of Two Cities and quoting without an apparent sense of irony: “It was the best of times, it was the worst of times.”

For finding his vision newly rejuvenated by digital technology, Romero might admit that, in some sense, this is “the best of times.” In offering perhaps his bleakest worldview to date, with a final line that asks, “Are we worth saving?,” he might be just as quick to state that this is “the worst of times.” A decade later, it has perhaps become tiresome to belabor the dire political state of our world. But it is fascinating to ponder whether a 2017 Dead entry would still allow for a belief that this contemporary moment is the best of times.