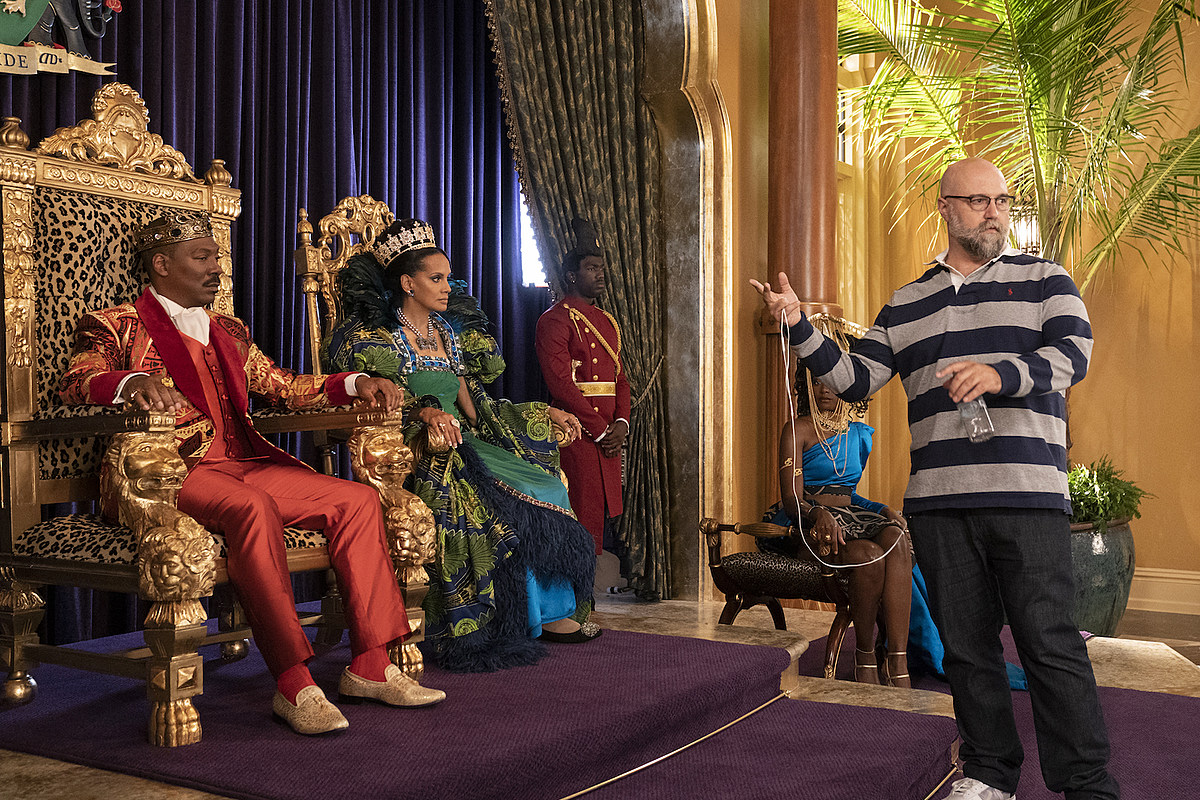 Craig Brewer burst on the scene in 2005 with the hip-hop classic Hustle & Flow, winner of Best Original Song Oscar for Three 6 Mafia’s “It’s Hard Out Here for a Pimp.” Following his take on a Blaxploitation flick, the sweaty Black Snake Moan starring Samuel L. Jackson and Christina Ricci, and a remake of Footloose, it would be some time before he returned to the director’s chair.

Flash forward to 2019, when Brewer teamed with Eddie Murphy to make the hilarious Dolemite Is My Name, a movie about Rudy Ray Moore’s pimp persona and successful indie film career making Blaxploitation movies. Brewer and Murphy have now reteamed for Coming 2 America, a sequel to the John Landis comedy classic that is now streaming on Amazon Prime.

The Film Stage sat down with Brewer over Zoom to ask about a hidden CNN joke in Coming 2 America courtesy of James Earl Jones and how Eddie Murphy’s character Akeem changed thirty years after the first movie. Brewer explains what it’s like to be responsible for stories with deep ties to American culture (this film and his Footloose remake), if political correctness hindered comedy in the sequel, and collaborating with Ruth E. Carter on Zamunda’s costumes.

Craig Brewer: [Laughs] I want to give credit where it’s due, Jon Farhat, our visual effects supervisor, is a big fan of Eddie Murphy. He also worked on Dr. Doolittle. One day he came in and made a joke that we should get James Earl Jones to say, “This is ZNN,” and it turned into a whole thing. And it’s really because of John. I’m glad you said that because it’s something people my age remember quite vividly that Darth Vader signed on with CNN.

In part two, Prince Akeem (Eddie Murphy) shifts into the role King Joffer (James Earl Jones) played in the first movie. In a lot of ways, he plays a straight man to the comedy. Were you nervous about changing that dynamic and what it would do to the comedy?

It’s something that was definitely on my mind, but it also made me remember what was funny about the first movie. I sometimes have to remind people that Coming to America was a very different role for Eddie. Prince Akeem wasn’t the wisecracking guy in 48 Hours, Trading Places, or Beverly Hills Cop. His humor came from him bringing this delightful, innocent naivete to things that should be very easy for people to feel, which is true love. He came to America and loved things that we think are abhorrent. He was thrilled that people threw garbage out into the streets and shouted obscenities at him. He loved everything that was both wonderful and awful about Queens. In the first movie, if you remember, a lot of the comedy is surrounding Akeem as well. He’s the agent of the comedy and I can see that being the same here. But we thought we would have more fun with the fantasy bubble that he’s been living in over the last 30 years, being abruptly popped by a family that he didn’t know from Queens and what does that new dynamic bring to the stuffiness of the royal court?

How did the comedy dynamic change to adjust for Prince Akeem’s new role as King of Zamunda?

The very dynamic of no longer having him be the fish out of water in Queens, it wasn’t just as simple as letting his son be a fish out of water in Africa, because it still has to be Akeem’s story. What I found rather interesting about doing this movie more than 30 years after the first is the audience is now experiencing what Akeem is experiencing on the screen. I was in high school when I saw the first movie and now I have high school kids. I can see where Akeem may want to stick with tradition, if it means keeping your family safe. Him dealing with the decisions that he made when he was a young man and full of ideals is different now that he’s going to be the king. And dealing with potential war and dealing now with a law that means that his eldest daughter, who’s trained her whole life to be the heir to Zamunda, is now being usurped by some guy who doesn’t give a damn and has never even stepped foot in Zamunda. We weren’t just mining the comedy of the first one, but flipping it, it had to grow into these other avenues that could be accessible to audiences that are my age who remember the first movie.

You directed the Footloose remake and now you’ve made Coming 2 America. What’s it like to take on these stories that have rich ties to American culture?

It’s very interesting. People ask me if there’s anyone I’d like to talk to about my experience, and there are two people who come to mind. I finally got to do it recently: I spent a good two and a half hours talking to John Landis. It was one of the greatest moments of my life because he was such an important filmmaker to me when I was younger. The stretch of movies that he did, I wish more people would talk about them because they really aren’t like anything else. From Animal House all the way through Three Amigos, there are so many in between those. Not to mention Kentucky Fried Movie and An American Werewolf in London, there are just so many that I can go into, but I’m very inspired by his work. I’ve wanted to talk to J.J. Abrams about how you handle Star Trek and Star Wars when it means so much to so many people. You can be exalted and torn down so much by the fans that it’s a struggle to stay creative at all.

Movies from the 1980s sound like they hold a special place in your heart.

What I love most about some of those classic movies I was raised on in the 1980s is they were all very human. They were gritty at times, but they were working class––there was a working class type of humor about them. There was something about taking people down a notch. The music element in movies of the 80s, I know people sometimes make fun of it, but I actually think they’re brilliant. I’ve tried to put it in movies that I’ve made that aren’t from the 80s, but to be able to do Footloose, and then do a follow-up to Coming to America, it’s not as easy as just saying we’re gonna do something 80s-inspired. You can’t do a montage and put on some bleached jeans and we’re good to go. There’s deeper things that you have to explore before you’re going to tackle something like that.

Will you talk about Ruth E. Carter’s vision for costumes and everything she created for the movie?

Ruth was the first call I made when I knew I was going to make Coming 2 America. We had just worked together on Dolemite is My Name. She is undeniably talented, and I think that her work transforms costumes. She’s now a cultural icon with what she does and her craft, because you can look at her work from Malcolm X through Dolemite, and you can see there’s a way that she embraces the epic nature of very human tales. We have become friends, and I asked if she was a little scared, because I was a little scared. How do we navigate this sequel? She’s aware of the same fears that I have, we don’t want to mess it up.

It’s funny because both through Ruth Carter and our production designer Jeff Sage, we had to find where that line was, we had to find what could we be inspired by from the original, what could we steal outright, and what can we evolve. I would say that the first movie embraced perhaps a little bit more of a colonial African nation. Zamunda is a little bit more political, a place where there would be state dinners. Whereas Wakanda had a little bit more of a warrior element to their royalty. A protector, if you will, of Wakanda and the world, and we would get into serious conversations about what’s the difference between Wakanda and Zamunda, serious conversations about two fictional nations of Africa. Then we found rather inspired moments. I remember one conversation that I felt described what the experience of Coming 2 America is, where I said, “Eddie is now going to have to be a lot like his dad. So what can we do in his garments that shows that he is now taking on the mantle of his father?”

And we started laughing about the great outfit from Coming to America, where they basically took like a lion pelt with a lion head and just wrapped it around James Earl Jones and it clasped on his chest. Ruth was like, we probably don’t want to do that, because it’s three decades later, and PETA is involved. I said what if we are inspired by that lion and we create like a big golden lion head that attaches to your chest, almost like this large metal, or brooch, and out of the mane would come a cape that would wrap around? We would always find elements in the original movie that we could then put into the creative mill, which is Ruth E. Carter’s mind and I let her go with all of the African designers that she was inspired by, the various regions in Africa that had their own look, and she could make some incredible gowns and outfits.

Is it too much in our political climate for Arsenio Hall to play the Extremely Ugly Girl again? Almost all the other characters come back, and she comes back in a clip, but it doesn’t have the same bite.

I think you picked something that was probably the lighter of all the things that I was worried about from the first movie, and yeah, that woman makes an appearance again in a clip. I think that we saw an opportunity in the fact that there are some things that are probably not going to fly today that were that were in the first movie, but we saw an opportunity to incorporate that into our narrative. I don’t think that if Coming to America was made today, a studio would necessarily welcome Imani hopping on one leg and barking like a dog just because her prince tells her to. But it allowed the writers and myself to say that’s interesting, why don’t we explore the fact that the Zamunda is still in this male-dominated, misogynistic, patriarchal bubble? And maybe it’s time to break that and what could break that better than Akeem having three daughters and realizing that he’s got to change, he has to listen to his children, that he has to incorporate what they believe into what’s in his heart. There’s some things that probably wouldn’t fly with an audience today, but I don’t think that’s necessarily bad. I think we still got the tone of the original movie, but we got to be our own thing to some degree.

Are you working on anything else with Eddie Murphy? Maybe The Nutty Professor 3?

No, I’ve been joking with him, so many people and reporters asked if there’s going to be Coming to America 3, and I’m like, he’s got an idea. But Eddie and I right now are concentrating on trying to keep our family and everybody safe. Then hopefully, I know that he’s gonna do some comedy and go out on the road. I got some projects, but I would love nothing better than to work with Eddie again.