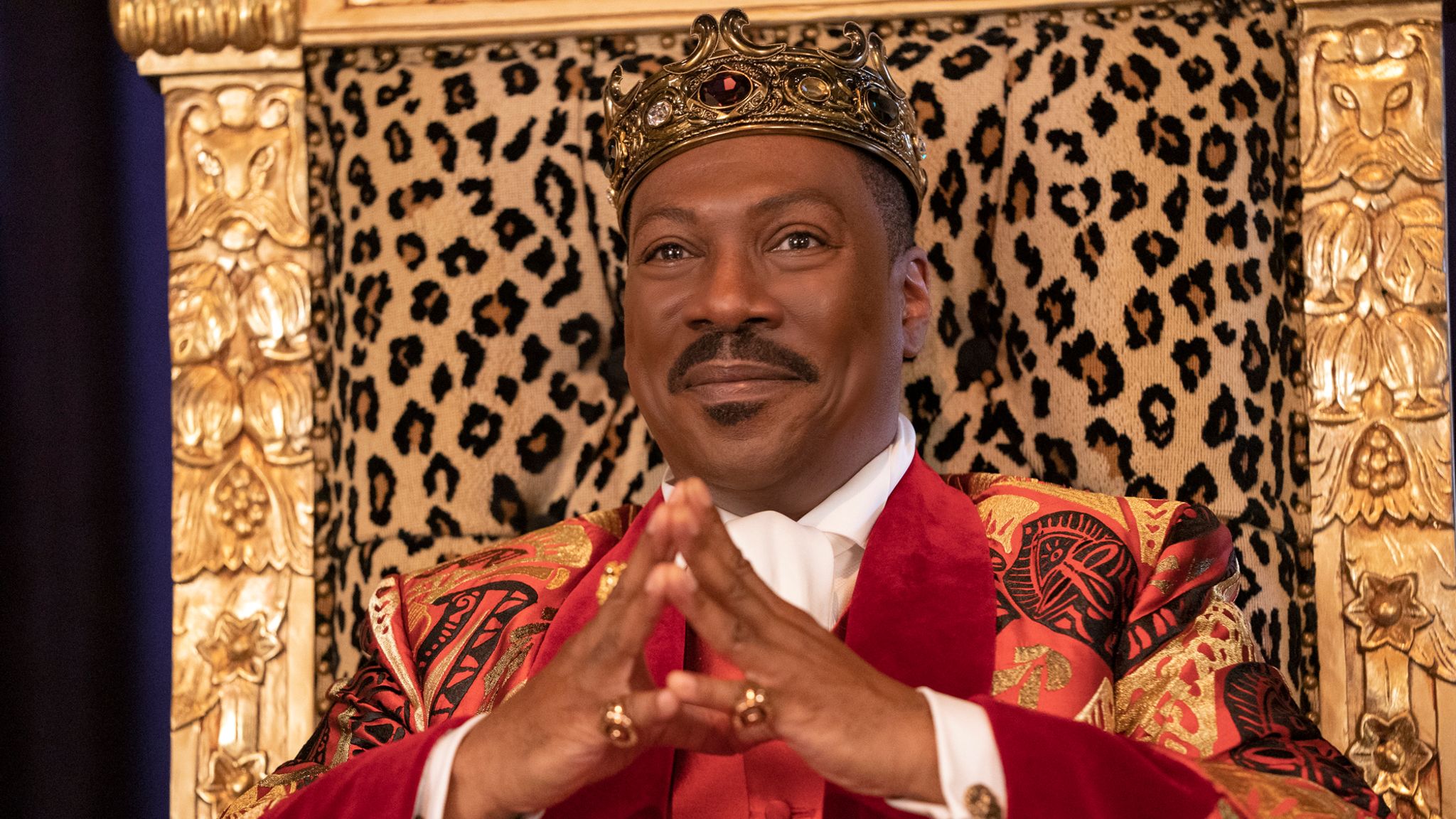 Coming to America’s lovely opening shot descends through clouds, down to the fictional African country of Zamunda as Ladysmith Black Mambazo’s “Mbube (Wimoweh)” echoes across the vast horizon. It’s one of the most beautiful openings in a 1980s studio film, evoking a real sense of collective harmony in the most effortless way. The proceeding, foul-mouthed romantic comedy is of course anything but tranquil. Facing an arranged marriage he does not believe in, the nation’s pampered young prince Akeem (Eddie Murphy) defies all cultural and traditional norms and visits Queens, NY, hoping to discover true love.

The flimsy narrative switcheroo concocted for its sequel, Coming 2 America—directed by Craig Brewer, who reunites with Murphy after Dolemite Is My Name—contains none of the original film’s overt criticism and anger about capitalism, greed, and consumerism. It doubles down on the fish-out-of-water scenario, this time involving Akeem and best bud/butler Semi (Arsenio Hall) once again traveling back to Queens (now gentrified) with hopes of convincing his illegitimate son Lavelle (Jermaine Fowler) to become the male heir to Zamunda’s throne.

Coming 2 America is progressive in its themes and ideas, blandly conventional in comedy. The film does a fascinatingly strong job revealing how conservative Akeem has become over the years, something he’s never realized until pressed with increased responsibility. But its screenplay seems split in how to get this character to avoid falling prey to the same assumptions and judgments that plagued his father in the first film. Often the more dynamic characters (e.g. Lisa and Meeka) are relegated to the background in favor of gag-heavy scenes highlighting the crass Americanism of Lavelle’s family (Leslie Jones and Tracy Morgan).

If the plot feels contrived to fulfill every purpose of being a cash-grab sequel, Brewer finds more joy in musical interludes and tangential moments that ultimately have little to do with any story arc. Sensing his own demise, King Jaffe decides to throw his own preemptive funeral, a rousing celebration of himself MCed by Morgan Freeman and featuring an inspired duet between En Vogue and Salt-N-Pepa.

Snipes’ warlord also has an affinity for grand musical entrances, which threatens to diminish the fact that he’s actually a psycho mass murderer. Nevertheless, the rendition of Prince’s “Gett Off” that he and his daughter put on for Lavelle nicely captures their seductive lure, in stark contrast to the more traditional Zamundan court.

Whereas Brewer’s early films expressed a level of grindhouse danger, he now seems more content to produce safer entertainment for the masses. Casual fans of Coming to America will have plenty of cameos and references to fawn over, but the fire and energy found in Murphy and Hall’s alter-ego performances (like the iconic cursing barbers of My-T-Sharp) have all but been extinguished. And it’s not just the lack of F-bombs that have hollowed out their feisty souls. Coming 2 America takes too long a road to get to a simplistic lesson: be kind to the person who threatens you the most and everything will work out. Only in Hollywoodland (and their version of Zamunda) does this feel remotely possible.