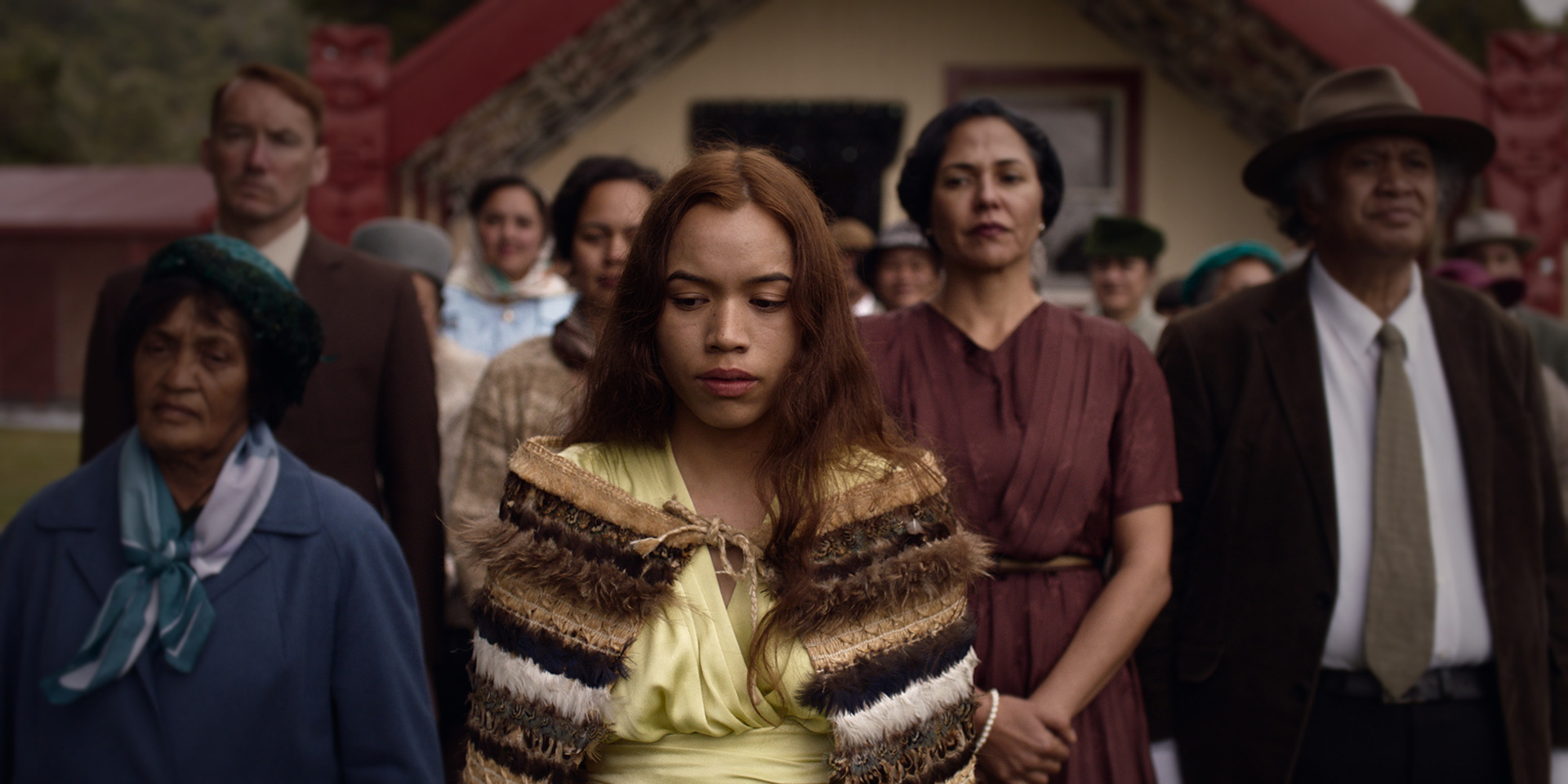 They only spent one summer together as children, but the connection they share from blood and heritage ultimately lasts a lifetime, whether they know it could or not. Makareta (Mihi Te Rauhi Daniels) promised young Mata (Te Raukura Gray) that she’d never give up looking for her—because even though they were together now, British laws had intervened to ensure that moment remained brief. It didn’t matter that Makareta, Missy (Keyahne Patrick Williams), and the rest of their Māori family wanted to keep her in their arms and raise her in the land where her mother now rested. Mata’s father had already given her to a woman in England only too willing to use her as a revenue stream upon graduating from a school for desolate children.

Ainsley Gardiner and Briar Grace Smith’s (who adapted Patricia Grace’s renowned novel) Cousins is thus the decades-long journey this trio takes to finally reconnect. The present finds Makareta (Smith) as a lawyer in England still searching for her lost cousin while doing all she can to help save her peoples’ land from the New Zealand government. Missy (Rachel House) has remained in their village to raise her own family and keep watch over their ancestors while Mata (Tanea Heke) is seen homeless and roaming the same streets Makareta travels daily. More than just a means to eventually let them cross paths again after so much time has passed, though, their story also hides the memories of heartache and struggle only indigenous people forever transformed by colonization can harbor.

Because even though these three came from the same family tree ruled by their grandmother (Miriama Smith’s Keita), they were born into three very different lives. While Mata was given away to a stranger hellbent on stripping her of her Māori heritage for so-called Christian etiquette, Missy and Makareta existed as though members of two separate classes. The former was destined to work the land like her mother (Cian Elyse White’s Gloria)—almost as punishment for Gloria marrying a soldier rather than the man Keita wanted. The latter was given the opportunity, education, and attention that being raised by Keita herself allowed. Such privilege would ultimately come at a cost, though: one Makareta would have to weigh before deciding her future’s course and, in turn, Missy’s too.

Smith and Gardiner thus take us back and forth through the years to witness how these cousins’ circumstances and motivations changed. But their distinct personalities through it all never waver. Mata is the quiet one, forever wrestling with a life of abandonment and confusion; Makareta is the logical one, always looking for ways to better her family and community; and Missy is the loud one, fearlessly beating her own drum to swim against the current with pride. Even as young adults (Ana Scotney, Tioreore Ngatai-Melbourne, and Hariata Moriarty respectively), they each meet their unique form of adversity head-on until they either change their path or succumb. And the pain wrought as a result proves just as potent, whether their destination was of their choosing or not.

That’s the fate they were dealt as natives in a “conquered” country. Everything they do will be a fight, even if that which they’re fighting for is contractually theirs already. Add the fact that one was stolen, one is dying, and one found herself positioned to plant a flag in the sand without knowing what her life would thus become, and you start praying that Grace found some way to give them a semblance of a happy ending to make certain it wasn’t all in vain. To watch them always having to compromise who they are and want to be for what these two conflicting worlds demand from them is a sobering experience. I’m sure it’s even more resonant for those who know it well themselves.

It’s not an easy task to traverse those heavy emotions through the interweaving crosscuts of three eras, but you wouldn’t know it the way Gardiner and Smith deftly handle the journey for optimum effect. They realize exactly when to drop a bombshell and seamlessly erase years to keep thematically relevant events in proximity—the heartbreaking transition of love and loss where it concerns Mata and the topic of motherhood, for example. And the performances (especially Heke, Smith, and House in present-day) are phenomenal in their complexity. The way the latter’s Missy berates Makareta to come home, only to be left speechless and disappointed when she finally agrees, is unforgettable. Some personal promises are more important than the overall turmoil affecting their community.

That’s where talk of whakapapa (genealogical links) and Kaupapa (Māori philosophy) comes into play—both directors utilize their own indigenous roots to mine Grace’s characters for their universality while simultaneously injecting pieces of themselves into the narrative. And since each one of these cousins has led such a distinct life from the others despite coming from the same place, everyone watching will be able to see a bit of themselves in one or more of them too. That’s why culturally relevant stories like Cousins are so crucial to understanding our world. They show us how alike we are no matter our religion, history, or skin color. To see their struggle is to sometimes know your role in its creation. To see their courage is to be inspired.

Cousins debuts on Netflix on July 22.