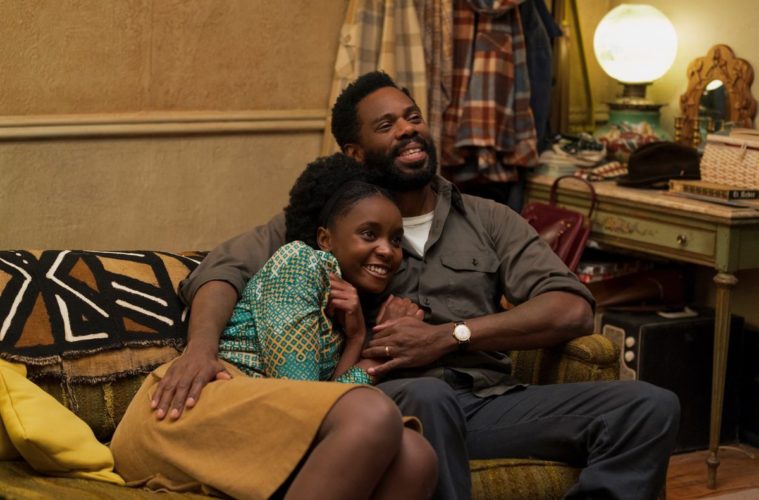 If Beale Street Could Talk is Colman Domingo’s first time acting for Barry Jenkins, but it’s his second time performing James Baldwin’s work. He adapted Baldwin’s essay Nothing Personal with Patricia McGregor into 30 pages of dialogue and performed it on stage as James Baldwin-type character in celebration of the author’s 90th birthday.

In Beale Street, Domingo plays Joseph Rivers, husband to Sharon (Regina King). He’s the patriarch of the Rivers family, but spiritually, he’s Moses to his children’s generation in Harlem; making a way where there was none. (See our interview with director Barry Jenkins about the spiritual themes in his film).

We spoke with Domingo about developing Baldwin’s work for the stage and how it prepared him for playing Joseph in the film. Domingo talks about the real blue-collar men who inspired his performance, from Joseph’s voice to his smoking habit. He also engages with a recent speech given by Cornel West. While unrelated to the Beale Street, a stand-out quote from West’s talk has striking resonance with the spirit of the film.

I was doing some research for our interview and realized my introduction to your work was Beautiful Something.

Oh my god! Wonderful. It’s a beautiful movie isn’t it?

Will you talk about the development of your elocution? You just have such a great acting voice.

Oh, wow. That’s a beautiful thing to hear. I’m from Philadelphia and I started in the theater in San Francisco and I was there for about ten years. And whether it’s being part of major Shakespeare companies or the circus, I just always had a love for language. My journey started out with a speech impediment. I had a lisp until I was like 10 years old. I would go to speech classes so I think that gave me an appreciation for elocution. I love the sound of what you can do and how you tell a story. I’m someone who with each role I try to make decisions about where they’re from, how it’s conveyed in the way they speak, even where in my octave range their voice is. Mine is somewhere in the middle, but sometimes they go deeper or they go higher. It is character based because I’m a character actor. It’s keeps shifting. It’s all decisions that we make for the character.

If I remember correctly, your voice for Joseph in Beale Street was a bit lower than your natural voice.

Yes, yes, absolutely. I made decisions based on Joseph’s education. I made a decision that he was a smoker and also that he was a chain smoker. [Laughs.] The kind of man’s man he was in his life experience led me to his voice. So all of that goes into play when I am creating a character.

Had Barry Jenkins seen your one-man show before you were cast? Playing every family member on stage seems like the perfect preparation to play the patriarch of the Rivers family.

Oh, thank you so much. He had not seen my solo show. I think Barry may have known my film work from Selma or The Butler, but I don’t think he hadn’t known my stage work at all, and on stage, I think that’s where maybe I got my chops for doing voice work. I was always the character actor who played four or five different roles in one show, so I had to make sure everyone was as specific and unique as possible. And in my solo show, I played up to nine characters and up to five at one time, so I think he did not see that, but he had seen some of my film work.

Do you think your show was good preparation for playing the patriarch?

I think it’s all been preparation for it. I think more than anything, in preparation for Joseph, has been being such a fan of Baldwin’s men and the complex men that James Baldwin writes and about the bonds of brotherhood. So I think for a long time I have been a fan of James Baldwin’s work and actually just about four years ago I played a version of James Baldwin for at a festival for James Baldwin’s 90th birthday. Me and Patricia Mcgregor, we adapted one of Baldwin’s essays called Nothing Personal, which is about 30 pages of dialogue and I learned all of that and I tried to convey the heartbeat of James Baldwin and what he’s wrestling with and our humanity. I think if anything, doing that piece prepared me to play the patriarch in If Beale Street Could Talk. Just understanding Joseph and these blue collar men who are very much ordinary human beings who are extraordinary by the way they take care of their families, put food on the table, and make a way out of no way. I wanted to lean into people that I understood and that I knew, like my stepfather, my brother, my uncles, my cousins; it’s a homage to them, to these men who don’t usually get screen time.

Having adapted that monologue and having worked on Beale Street, what can you say your relationship is with Baldwin’s work?

Oh my God, it’s gotten even richer. The other day I was unloading some books because I’m moving to a house and I was unloaded my stack of James Baldwin books and essays, and something about even touching the covers of those books I feel so much pride, because he was always my go-to when it comes to wrestling with questions about America, and being a black man in America. He gives me words where I have none at times. No one phrases something like James Baldwin, no one can talk about the light and darkness like James Baldwin. I think he’s become even more so a kindred to me; knowing his family now, his nephews and his sister, I feel even more so like I am part of the family. So much so I was just at Saint-Paul-de-Vence about three weeks ago, I was on my way to a camp and I made a little pit stop to the place where James Baldwin lived for about 17 years, and on trip there I was Googling and I learned the only piece of work he finished there at Saint-Paul-de-Vence was If Beale Street Could Talk. So I do feel like there’s some kindred, some spirit that’s connecting us, because else why would I be anywhere near Saint-Paul-de-Vence? I’m in the middle of this press tour, and I made a pilgrimage just to feel the air and to look at the views and the vistas where he was inspired to write this story and have this really acute eye towards America.

Will you talk a little about the Rivers family and the kind of family they are; especially given all they went through to keep Fonny out of jail?

I think the Rivers family… there’s something special about this family in the way they take on Fonny’s plight as their own, and Fonny is no way a blood relative to them, but it’s important because he is connected to their daughter and he is apart of the family. It’s about showing how much larger the community is than just blood relatives. Sometimes people who aren’t blood can do more for you than your family, and that’s what exhibited between the Hunt and the Rivers families. There is so much joy, grace, and love in the Rivers family, and humor and goodwill. They’re just an ordinary family, just trying to make it through. The matriarch and patriarch are just trying to provide and make sure their children have it just a little bit better than they did. They are a very simple, ordinary, blue collar family just trying to do some good, and put some good humans into the world. They are a family that when things like systemic racism is just so apparent, they don’t fall apart, they pull closer together. I think that’s a great message for families these days, as we are grappling with the consciousness of America to hold to each other a bit more, try to find a way out of no way, and to lean on your brother even more so, and lean on your family in a way you never knew was imaginable.

How was working with Regina King in the film?

Oh my God, Regina is so much fun and so inquisitive, and she’s fierce. She’s got so much love and grace; she gives so much, just with one glance, with one look in her eye, she’s giving me my entire performance. I hope in some way I gave her her performance as well because that is what actors share with one another. When it’s a generous room, you get to fly, and I felt like I was flying the entire time because all I had to go was look left and right and every actor was holding me up. I think that’s the same for Regina; we wanted to make sure her journey as Sharon was so well lifted, and that she could be spirited, and open, and raw.

She’s done some directing work and you have as well. what’s it like to go back and forth between being directed and directing people and how do those different roles inform your performances?

I really enjoy it. I think my better self is a director. I’ve always been an actor who asks a lot of questions. I’ve always been interrogating work from all points of view, it’s always been hard for me to just to receive as an actor. As the director, it just fulfills me in the most extraordinary way. It’s a lot of problem solving, but then I’m able to go back as an actor and understand the director’s journey and be a more supportive actor, so I think it just really flows in such a great way. I encourage all actors to do some directing if they haven’t and also some writing as well because it makes you a more multifaceted artist. You’re not just in your own lane; you’re looking at the sum of all parts.

Recently I was watching Cornel West introduce Colin Kaepernick at Harvard, and he said this quote… it’s like, this line is what the of world is Beale Street is begging for. I’ll read the line and tell me what you think about it: “Justice is what love looks like in public. Tenderness is what love feels like in private.”

Wow. That’s exactly the spirit of this film. That could actually be underneath If Beale Street Could Talk, because that’s exactly what we’re wrestling with. We’re looking at all that tenderness in private that will help you and prepare you for the world outside, which we’re all struggling to find justice for all. It’s absolutely right on and it’s really the state of America right now.

If Beale Street Could Talk is now in theaters.