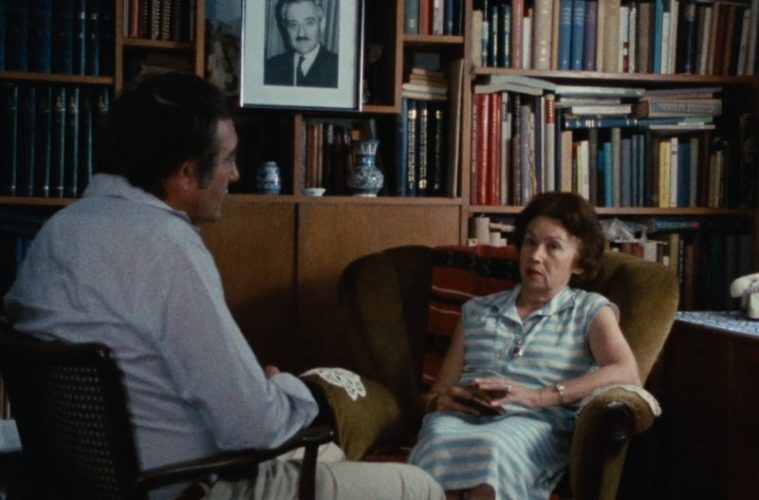 Claude Lanzmann’s ‘Shoah: Four Sisters’ Brings a Female Perspective to Survival Under the Horrors of Nazism

Less than half a year after Claude Lanzmann’s passing this past summer, the Quad Cinema in Manhattan has this week premiered the late documentarian’s Shoah: Four Sisters, a compilation of four short features described as “satellites” of his 1985 Holocaust magnum opus. Comprised of selections from the staggering private archive of interview footage compiled by Lanzmann during Shoah’s 11-year research and filming process in the 1970s, the four segments respectively consist of four extended one-on-one interviews with Jewish women who survived the Nazi death camps across Eastern Europe, each one sharing her harrowing personal story of atrocities witnessed and, at times, horrifying compromises made.

The four women speak different languages, hail from different cities, and lived very different lives before and after the war, but in labeling them as “sisters,” Lanzmann draws attention to the identity formed by shared trauma and collective witness to history. Indeed, all of their stories share certain narrative and historical touchstones: an escalating sense of collective terror as the rise of Nazism gave way to increasingly militarized antisemitic oppression, then to abject slaughter; the isolation of being surrounded by indifferent or outright cruel civilian onlookers, happy to see Jews and other undesirables taken from their midst or too self-absorbed to care. Moments of horror-film-like surprise and irony in face-to-face confrontations with murderous Nazi officers and collaborators dot the stories, prefacing acts of absurd, hauntingly pointless sadism by those with the power to use human bodies as they please. Above all, each and every account portrays survivors in an unceasing, years-long race against a colossal oncoming machine of absolute death and destruction.

Certain notes also echo eerily in the present moment of the West’s resurgent fascist right: the sheer orderliness of the Nazis’ methods and rhetoric allows them to cling to a pretense of “civility” and “fairness” as they advocate and carry out acts of irrational and unfathomable hatred. Everywhere there are hints of the ways in which the Nazi machinery of extermination came with built-in means to downplay their own responsibility: formal pleasantries which indicate facile nods toward law and order–the families of men slaughtered and dumped in mass graves received postcards informing them of their loss. Euphemisms to soft-pedal atrocities–in one stomach-churning anecdote, Josef Mengele himself is recalled to have avoided the word “selection” in describing his macabre on-site sorting of prisoners into “healthy laborers” and victims of the gas chambers. One survivor posits a plausible theory that the camps were specifically designed to break their occupants’ will to live rather than kill them directly, so that the Nazis could shrug off immediate responsibility when mass deaths were attributed to illness and starvation. Most controversially, the latter two segments of the film deal at length with accounts of the Judenrat, Jews employed by the Nazis to police and pass judgment on their fellow prisoners, some even using a direct line to Adolf Eichmann to negotiate who might be spared while marking others for death.

More subtly yet even more universally, the four accounts also join together in painting a portrait of women survivors in times of war and brutal oppression. All four narratives are uniquely those of women, indicating the different paths and particular horrors laid before them in that hellish time. Some clung to husbands to survive, while others were forced to negotiate the good graces of male officers as they subsisted in the camps and ghettoes on niches of “women’s work.” One shares the tragic and death-defying story of a pregnancy carried to term amidst the death camps, with a life-saving act of grim mercy provided by a Nazi nurse sympathetic to their shared experience of birth and bodily womanhood. Under siege by unimaginable forces of destruction, such marginalized women are the weakest of all people, physically and socially–yet the survivors cling to life by the strength of their cleverness, cunning, empathy, and sheer will.

Lanzmann’s grainy, unrestored footage, minimally edited and often static in extended takes, gives the impression of a supplemental feature or an archival museum piece more than a stand-alone, prose-poetic film like Shoah itself. Aesthetically and emotionally it’s a grueling, restless task to sit through just one of the film’s four segments, let alone several back-to-back. Yet the restlessness induced by this rough presentation perhaps serves its own purpose. Watching these women tell their stories as a Jew–a Jew with close family residing in the recently-terrorized community of Squirrel Hill, PA–my most immediate response was a dull, creeping sensation of displaced energy. Knowing what was behind me, I–just like the survivors–wanted, or perhaps needed, to move on from its black hole of the past, with eyes turned toward the future. I needed to prove a point, to the antisemites or perhaps the world itself, merely by living and feeling. The women of Shoah: Four Sisters give the impression of plain and earnest people; only their stories are extraordinary. Scabbed and mangled by trauma, yet never truly extinguished, their will to live on, to surpass an unthinkable and seemingly insurmountable violence, is understatedly infectious.