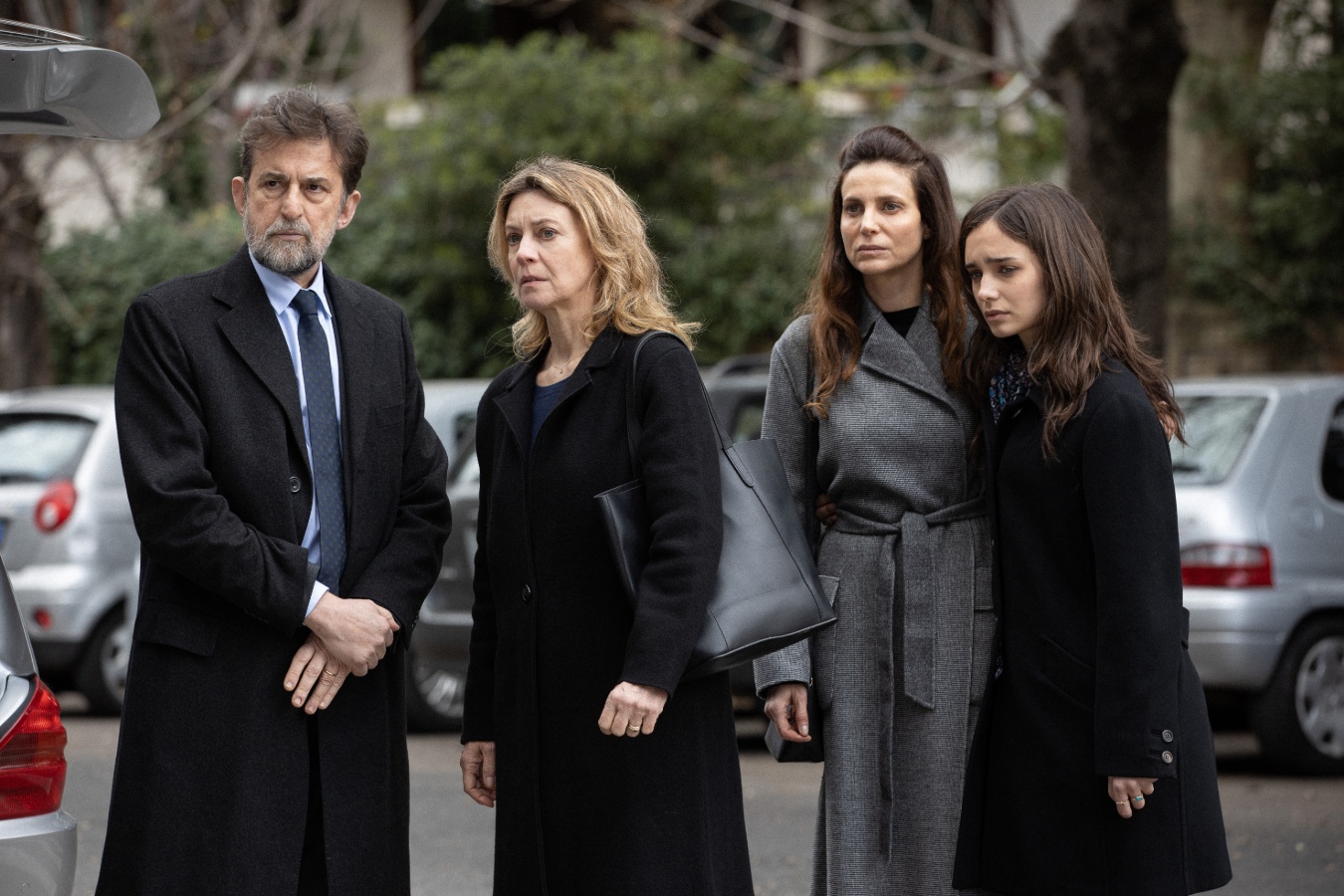 A car is knocked off-course on a quiet suburban street and crashes fatally into the front room of a well-furnished apartment. In the flurry of bricks and wall plaster, it lands inches from the feet of a young girl who stares the wreckage down with a cool, deadpan expression. If this is your classic “inciting incident” for a full-bodied, conventionally structured drama, its oddly comic denouement––coupled with the main characters all appearing to survey the outcome in little, rhythmic intervals––mark Three Floors as a work by Nanni Moretti, who never met an instance of bourgeois life he couldn’t mischievously ironize.

This irony, self-awareness, and self-referentiality may elude viewers of this new ensemble drama: there’s no obligation to always keep a director’s prior work in mind, but have they forgotten Moretti’s influence from psychoanalysis, its invocation to scope “what lies beneath”? Sometimes a cigar is just a cigar, but maybe it’s naive to see this as a simple affair celebrating and defending bourgeois mores––although the flurry of incident and the crisscrossing, quasi-Richard Curtis narrative throughline help arouse some of Moretti’s weaker, more sentimental instincts.

To paraphrase a sharp quip heard from a colleague after the screening, Three Floors often resembles one of those soaps on prime time, terrestrial broadcasting, with the name of a street in the title—Peyton Place, or Coronation Street, say. Ouch. But the pile-up of characterizations, melodramatic plot points, time jumps, and the prestigious, overqualified cast gives for some juicy narrative momentum, and Moretti himself approaches this material with absolute conviction––which for some viewers has given the impression of unintentional camp.

A deep breath is needed before diving into the plot. For on each of the three floors lives one photogenically unhappy family in quite a spot of bother. A hole in their front room being enough to contend with, Lucio (Riccardo Scamarcio) and Sara (Elena Lietti) drop their young daughter Francesca off at their elderly neighbors––and Lucio suspects the older man might be a pedophile. The young man responsible for the crash, Andrea (Alessandro Sperduti), has parents (Moretti and Margherita Buy) who are both judges––and their sympathies are with full fealty towards the law. A new mother, Monica (Alba Rohrwacher) struggles adjusting to her solitary new experience, looking after her newborn daughter with little assistance from her husband Giorgio (Adriano Giannini) who is away looking after large construction projects. Similar to the mysterious harmonium in Punch-Drunk Love, she wakes up one morning greeted by a large, wrapped present, with no indication of its original sender.

The Lucio storyline doubles back on itself when he realizes the babysitting couple’s flirtatious granddaughter Charlotte (Denise Tantucci) could help allay the former’s fears her grandfather isn’t dangerous to his own daughter. Lucio ends up sleeping with the underage Charlotte, in an attempt to further symbolize his paranoia and woeful mishandling of the situation; he’s then granted more sympathy than the person he has sexually assaulted. It’s an attempt by Moretti to depict a kind of tunnel-visioned toxic masculinity that treads close to victim-blaming, and the years-later conclusion of this story strand tests plausibility.

But if we are to defend Three Floors it’s with recourse to Moretti’s deeper interests, namely in psychoanalysis and (even if it seems a stretch) left-wing politics, which help explain what he’s up to in this melodramatic cluster of tales. Neurosis, reality testing, and projection seem endemic to how the characters bring misery upon themselves; very pointedly, there’s no analyst figure who pops up to give the characters an outlet, as in many of his films. And perhaps it doesn’t need reminding, but when it comes to the appearance of this supposedly snug condominium, with their inhabitants’ economically privileged lives and ostensible happiness… well, appearances can be deceiving. Within it lies the seeds of its demise––a very Marxist notion from a filmmaker who still maintains his sharp political fangs.