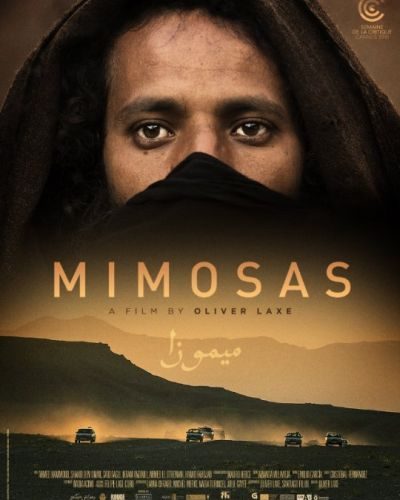 A “religious western” is how Moroccan-based Spanish director Oliver Laxe describes his second film, Mimosas, winner of the top prize at Cannes’ Critics’ Week. It’s a spiritual, ambiguously plotted journey through the Atlas Mountains, and those willing to give in to its mystical embrace and gorgeous visuals should find it a sensual, engrossing watch.

There’s spiritualism from the opening scenes: deep in the Moroccan mountains, a group of nomadic travelers are being led to the ancient city of Sijilmasa by their wizened old sheik, a dying man who wants to be buried in his home town. Crossing the Atlas is treacherous, and some in the caravan object, but faith in their leader among the rest carries them through.

The film cuts to what seems like another world – a bustling city, where Shakib (an eminently watchable Shakib Ben Omar) extolls a Quranic tale of the devil in the garden of Eden. He’s presented as a religious charlatan, and even gets one of the biblical names wrong. But his elders believe him to have baraka, a kind of divine insight, and send him off on a mission to assist the nomads in their trip across the Atlas Mountains to safety.

When he arrives, however, he finds the sheik dead, with two rogues in the group, Ahmed and Saïd (Ahmed Hammoud and Saïd Aagli), having pledged to take him alone to Sijilmasa. Once they’ve left the group, they first plan to leave the Sheik to drift on the back of a donkey and head home, but when Shakib joins them, they find themselves driven to complete the quest – one for which Shakib has a divine essence.

The dynamic between the central trio is delicately balanced, but the way their relationship builds is one of Mimosas‘ joys. At first, Ahmed and Saïd are the authority figures, with Shakib the village idiot, a “very strange” man whose positive belief in people is short-changed in reality. “If mules can’t make it through the path, then they will ﬂy,” Shakib comments in one flight of fancy — a proverb that at first seems meaningless but gains insight to other characters who begin to see his simple ways as values to be honored. Indeed, rather than Ahmed, who has “the face of a sheik,” Shakib is the one dolling out moments of wisdom, a treatise in the way that faith – in whatever form, religious or otherwise — has the endless ability to give meaning and renew hope for people. It’s also worth mentioning the extreme changes of direction in Laxe’s film, his first since 2010’s critically acclaimed You All Are Captains, which also premiered at Critics’ Week in Cannes. It has the imagery of westerns, such as those by John Ford, and perhaps the postmodern offerings of Jauja and Far from Men, along with the sense of a road movie between three unorthodox individuals, with changing attitudes to peoples and cultures. And, in the final third, it turns into a curious rescue mission, when their party stumbles into the terrain of Islamic militants, although these scenes are far less action-thriller than a further reflection on religious themes in various dimensions.

That last twenty minutes also have grand jumps in space and time, as if one stumbled into a Terrence Malick feature, although fans of British artist Ben Rivers will recognize shots from his recent work The Sky Trembles and the Earth is Afraid and the Two Eyes Are Not Brothers, which was made alongside Laxe’s film. This sequence will baffle many, as I imagine is its intention, and it’s also strangely moving. Despite offerings of the open landscapes of North Africa, if there’s a wild west in Mimosas, it’s internal and spiritual, the quest being for meaning in a world that, like the film, doesn’t give easy answers.

Mimosas premiered at the 2016 Cannes Film Festival and opens on April 14, 2017. See our coverage below.