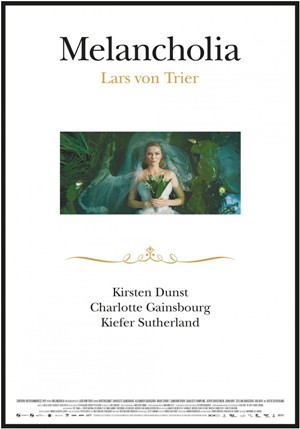 Lars von Trier, the notorious bad boy maestro of Cannes, has delivered a new masterpiece in the form of the apocalyptic Melancholia. Following the disturbing horror film Antichrist, in which the director was heavily criticized for scenes of intense sexual brutality, the Danish auteur has decided to refrain from over-the-top big shocks in favor of a more lyrical interpretation about our own mortality. It’s the first time the filmmaker has ventured into sci-fi territory, yet this aspect only serves as subtext for the inner conflict brewing in the minds of his characters. Interestingly enough, Melancholia feels like a counter piece to Terrence Malick‘s The Tree of Life, which strives to find the beauty in life. Whereas in The Tree of Lars, the central theme is the manifestation of our primordial fears when confronted with impending doom.

The film opens with a devastatingly beautiful and hypnotic montage of haunting images, shot at thousands of frames per second to achieve a sense slow motion that makes the opening of Antichrist feel like a speeding train. It is a ominous foreshadowing of what is in store, like a dream feathered with symbolism that is cinematically operatic. The title then splashes across the screen like a cup of cold water thrown in the face, in the same font as Antichrist, indicating a connection to his previous film that possibly hints of some sort of end of days trilogy (Von Trier is famously known for making films in threes). The rest of the film is broken into two chapters, focusing each on two sisters, one whose happily married and the other whose just been wed. The dynamic between the sisters has echoes of Chekov, since their relationship is also the crux of the film.

Justine, played with surprising maturity by Kirsten Dunst, who has finally come into her own as an actress, is en route to her wedding reception at the posh residence of her sister Claire, played by Von Trier veteran Charlotte Gainsbourg. It should be the happiest day of her life but yet she is plagued by an unknown depression that prevents her from enjoying herself. The awkward tension at the reception signals that something ominous is amidst. Meanwhile in the cosmos, a planet hidden by the sun named Melancholia is on a direct course for Earth. John (Kiefer Sutherland), familiar with astronomy, is quick to calm his frantic wife Claire by reassuring her that scientists have calculated the trajectory of Melancholia to narrowly miss Earth. Yet the feeling of foreboding destruction is palpable as the planet comes closer and closer. But not even Jack Bauer can save the planet in Von Trier’s universe.

Melancholia is really less about the end of the world as it it’s about the inner turmoil we face when confronted with our own demise. In many ways, Justine represents the feeling of hopelessness that the planet Melancholia is bringing to Earth, while Claire’s optimism about surviving the apocalypse can be thought of as our home planet on the verge of annihilation. The planetary collision is representative of an inner state of mind, the two train of thoughts that Von trier wants you to simmer in. The message that our world is evil and no one will miss it when its gone is reflective of the state of mind that Claire is obsessed with. Von Trier is an expert of manipulation and as the drama unfolds, he carefully constructs his motives without being overbearing, making the end result of Melancholia a powerful statement on the futility of our lives as we try to escape our own inevitable fate.

Melancholia will hit theaters later this year via Magnolia Pictures.