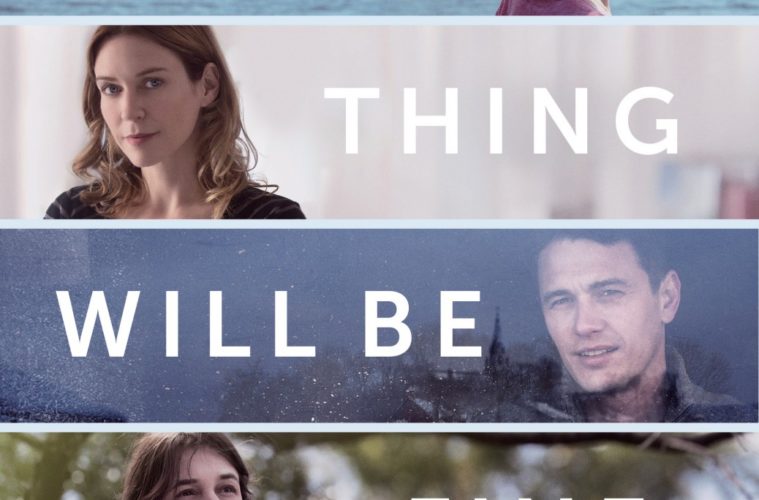 [Camerimage Review] Every Thing Will Be Fine

A three-hankie weepie that harks back in its melodramatic rhythms and constantly moves forward (or so it at least thinks) with its use of digital 3D, Every Thing Will Be Fine, Wim Wenders‘ first narrative feature since Palermo Shooting, is always flirting with being a white elephant. It would only require, say, two more bad scenes — more bizarre choices with regard to the performances, more bits of dialogue that get to the heart of a character’s grief with the grace of a drunk lumberjack, or at least fewer pretty images — to teeter into chaos. And this is what ultimately makes the picture most worthwhile: even those moments that raise the eyebrows sky-high still have a weird integrity and determination skating under the surface.

Approximately half the things you need to know about this movie are contained in its first few minutes, where treacly music and wistful snowflakes — all dancing across the screen in 3D — are our sensory focus. A sad-looking man, who we’ll soon learn is a writer named Tomas (James Franco), wakes up in some sort of narrow wooden shack crowded by a cot and oven. He crosses out some scribblings in a notebook, has a remarkably unnatural-sounding conversation with some ice fishers — “How’s the writin’ goin’?!” — exchanges words over the phone with some sort of loved one, who we’ll soon learn is his estranged lover, Sara (Rachel McAdams), and gets into a horrible car accident. Kate (Charlotte Gainsbourg), the mother of the boy who he runs over, is introduced in a warm, golden light running through her home, a tone that will soon be extinguished when she runs out, discovers her dead son, and screams. This is replaced by, what else, her other child playing under a Christmas tree. And so it begins. This is all pitched in a very earnest key, but it’s not necessarily rooted in reality — or so I like to think. If the case should be otherwise, Every Thing Will Be Fine is as lugubrious as that space separating the first two words of its title. As one who feels little excuse to defend Wenders, however — e.g. his sincere, meant-to-be-awe-inspiring Until the End of the World is far and away the best “comedy” I’ve seen in theaters this year — I say with no small amount of confidence that this, however clunky, is (mostly) meant to be taken much in the same way we should process Douglas Sirk or Nicholas Ray. Change the muted blues and greys to bright reds and yellows, and the continuation of a tradition might be clearer.

This one particular aspect is not necessarily in said tradition, but it’s worth considering that almost everyone — outside Franco, his stepdaughter, and a grown-up version of the surviving child (the last two will not appear until the final act) — speaks with a stressed accent. The film being set in Quebec, a fairly diverse area, doesn’t make this by any means unbelievable, but the procession is curious: McAdams’ Sara speaks with some vaguely Scandinavian tone that comes and goes, even though there’s no discernible reason for her to have a foreign country of origin — just as a brief encounter at Tomas’ publishing house needn’t necessarily be with a woman from France, who stresses her position as a translator. (Gainsbourg wears no sort of vocal mask, and the great Peter Stormare, who has as recognizable a voice as any among contemporary character actors, briefly appears as Tomas’ editor.) What seems to be the case — what’s one of the only reasonable explanations, actually — is that Wenders and scribe Bjørn Olaf Johannessen are pushing forth these signifiers in an attempt to create a land where no one is quite the same, where everyone bears distinctions that make others into an other. I shudder to think that they’re “unique like the snowflakes before us,” and yet that’s precisely the sort of silly-earnest attitude coursing throughout.

That notion might make you gag, and could have very well soured the project much further if Every Thing Will Be Fine wasn’t so consistency a pleasure to observe. It would stand as a well-measured work of directing in two dimensions — the recurring assemblage of shots and cuts to build tension, dread, and portent, and the ability to separate those close-but-distinct feelings, is terrific in and of itself — but the union of Wenders, cinematographer Benoît Debe, and stereographer Joséphine Derobe produces images that range from accomplished (speaking for the most essential aspects of image-making) to outright beautiful. The 3D is impressive as a showcase, more so as a supplement to drama: the way it brings so many of the close-ups into an almost-direct contact; the emphasizing of an actor’s numerous facial tics; the enhancement of atmosphere in correlation to the clear-as-day emotions dictating the drama.

The drama is a bit trickier. For as much as I can defend its turns and temperament as slanted representations of a typically empathetic grieving tale, there nevertheless persists a plodding to the plotting that little oddities and visual expressions can only do so much to overcome. Abandoning the first two acts’ precarious emotional headspace, Johannessen and Wenders begin steering their melodrama into the territory of misery porn. This later portion’s two main dramatic events are an echoing of the instigating accident and the return of a long-missing character, and this plays as a stacking of the deck. More than over-stressing Tomas’ struggle, it requires pay-offs that force the movie into a comical one-ending-after-the-next design. It’s already questionable why this story should conclude where and how it does, and to close an emotionally knotty story with these points muddies the inevitable, demanded post-viewing consideration.

The admirable craziness — the sort that doesn’t announce itself or use that quality to pervert every individual moment — doesn’t necessarily subside, and thus neither does my affection. Wenders and co. have created something at once unidentifiable and part of a long cinematic tradition, which speaks to me as a sign that it, no matter the initially poor reception, will have time to grow.

Every Thing Will Be Fine played at the Camerimage International Film Festival and, courtesy of IFC, will begin its U.S. theatrical run on December 4.