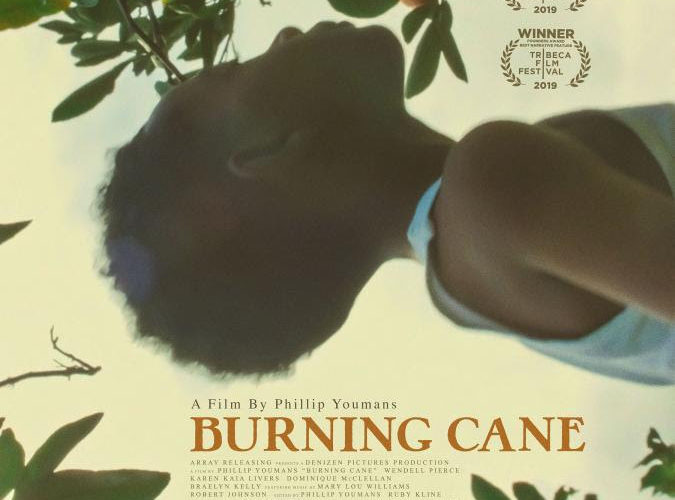 Helen Wayne (Karen Kaia Livers) can’t cure her dog of mange. Everyone tells her their surefire remedies and she attempts them all—one month with borax, another vegetable oil. Sometimes the dog gets better and other times he gets worse. She won’t give up on him, though. Her love for his kind soul that doesn’t deserve the pain and suffering he’s endured keeps her looking for another solution. She’ll do anything but go to the doctor because she knows he’ll simply tell her that the time has come to put him down. But that’s not true. It can’t be if God hasn’t done so already. This is therefore a test for Helen and her pet to prove their righteousness. They’ll withstand this hardship and pray for better days.

That doesn’t necessarily guarantee better days are coming as much as provide the hope of their possibility. Maybe God will give her a sign tomorrow that makes her realize the end has officially arrived and how it presents itself is for Helen alone to know—her piety enough to sustain her belief that whatever happens does so for a reason. It’s ultimately this strength of character and faith that lifts her to the forefront of Phillip Youman’s Burning Cane as its central voice of clarity while the world around her falls to pieces. She bears witness to the difficulties the males in her life face whether her dog, alcoholic son (Dominique McClellan’s Daniel), vulnerable grandson (Braelyn Kelly’s Jeremiah), or emotionally crippled pastor (Wendell Pierce’s Reverend Tillman). How will this Protestant mother deal with what’s happening? How will she attempt to help these men conquer their demons? How will Helen reconcile the desire to save them despite what they’ve done during the angry stupors their fragility has wrought? These are tough questions to answer because that fragility is what their abuse (self-harm through addiction and its escalation towards domestic violence) seeks to hide. And in some cases it’s also what her words have helped facilitate. Because what does it mean to “be a man?” That’s what she screams at Daniel, emasculating him by saying no son of hers will let a woman provide for his household. Toxic masculinity is thus shown as wholly pervasive within this New Orleans community. It rules men and women alike.

Taking the leap to say it also impacts writer/director/cinematographer Youmans shouldn’t be too difficult either since his handling of the topic is unapologetic in its visually poetic yet starkly matter-of-fact honesty. This is a teenager who expanded upon a short film script during his senior year of high school and found himself lucking his way into meeting the right influential people at the exact right times. Livers came onboard to help cast the feature only to eventually earn the lead role of Helen herself. A local actress who ate where Phillip waited tables happened to have Pierce’s phone number and the graciousness to put them in touch. And Youmans eventual executive producer Benh Zeitlin joined the fray because of an Instagram message with a brief trailer of footage. From that string of good fortune came a whirlwind of success with wins in Tribeca (Best Actor, Cinematography, and Film in the US Narrative category) and a distribution deal with Ava DuVernay’s ARRAY Releasing. And it deserves every accolade and opportunity received due to its unrelenting authenticity and complex themes. These are god-fearing people on-screen who themselves have lost their way despite the ease at which they blame younger generations for having strayed. These are men so afraid of confronting themselves in a mirror of isolation that they’ll match words with fists until contrition becomes replaced with explanations falsely born from “not having a choice.” They did, though. Everyone does. Some simply can’t protect themselves from Satan’s manipulations, succumbing to their greed for selfish desires above all else.

So they make excuses and drag other down with them. Daniel’s stay-at-home Dad skills find him forcing his young son to drink alcohol with him so as not to get the drunk drinking alone. Reverend Tillman begins to call out others as he spirals into depression after the passing of his wife because he refuses to be the only one forsaking God. And Helen watches them fall, injecting herself into their lives as a means of saving them from self-destruction. Just like her mangy dog, God hasn’t yet taken them from this Earth. Daniel still wakes up after comatose nights and Tillman still somehow makes it home after driving drunk. Something is guiding them towards second, third, and fourth chances and she will not quit until He does. What if things get too bad? Can these men’s actions prove to her that God has stopped helping them and instead gave her his blessing to make things right? Just as He decided to throw Satan out of Heaven, so too must she figure out if the time has come to cut out the disease that these men have become. Here they are: byproducts of racism and persecution, told to be something their country almost always prevents them from becoming. They exist in a machine of perpetual motion with little to no means of escape, a cycle of violence and sorrow that can only end with their removal from the equation before infecting the rest. Helen is here to burn the fields and expose the promise contained within.

It’s a dark metaphor with even darker results. Just like Helen refuses to take her dog to the doctor, she won’t be seeking outside counsel when God has told her to keep things “in the family” so to speak. Youmans takes us from fiery sermons to blues on the record player at home. Both are used to supply potential on the horizon as well as to shroud the evil already here. Tillman uses his words to mask the fact he’s preaching to his own deaf ears (Pierce is all-in with this performance) while Daniel uses music’s greats to transform his corruption of Jeremiah into bonding time with Dad. And until they acknowledge the error of their way, that cycle of suffering continues. Unless, of course, God does intervene.

Burning Cane opens in New York on Oct. 25 at the IFC Center and in Los Angeles on Nov. 8 at ARRAY’s Amanda Theater and in select cities. The film will be available on Netflix starting Nov. 6.