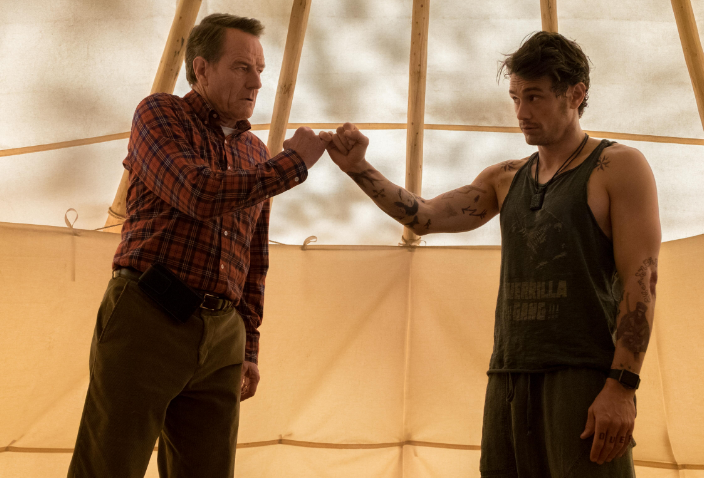 Bryan Cranston Hates James Franco in First Trailers For ‘Why Him?’

James Franco is leaning into his creepy side, as he plays a quirky and kinda-creepy millionaire who just so happens to be in love with Bryan Cranston‘s daughter (Zoey Deutch) in Why Him? The first green band and red band trailers have been released together, and they are almost carbon copies, except the red band one gets to cuss! If you like hearing James Franco toss around ‘f**k’ like he was paid to (wait a minute…), then check out the red band, otherwise you might as well close your eyes and click at random.

The story revolves around Cranston and his family visiting the love of their daughter’s life (Franco) who lives in a massive house and does quirky things — like combat train with Keegan-Michael Key and get a tattoo of the families Christmas card on his back — and is obsessed with their daughter. He wins over all of the family except Cranston, whose blessing he needs before his planned proposal on Christmas day. War and hilarity ensue, and checks were cashed.

See the two trailers below, along with a poster, for the film directed by John Hamburg (I Love You, Man).

Over the holidays, Ned (Bryan Cranston), an overprotective but loving dad and his family visit his daughter at Stanford, where he meets his biggest nightmare: her well-meaning but socially awkward Silicon Valley billionaire boyfriend, Laird (James Franco). The straight-laced Ned thinks Laird, who has absolutely no filter, is a wildly inappropriate match for his daughter. The one-sided rivalry—and Ned’s panic level—escalate when he finds himself increasingly out of step in the glamorous high-tech hub, and learns that Laird is about to pop the question.

Why Him? opens December 25th.