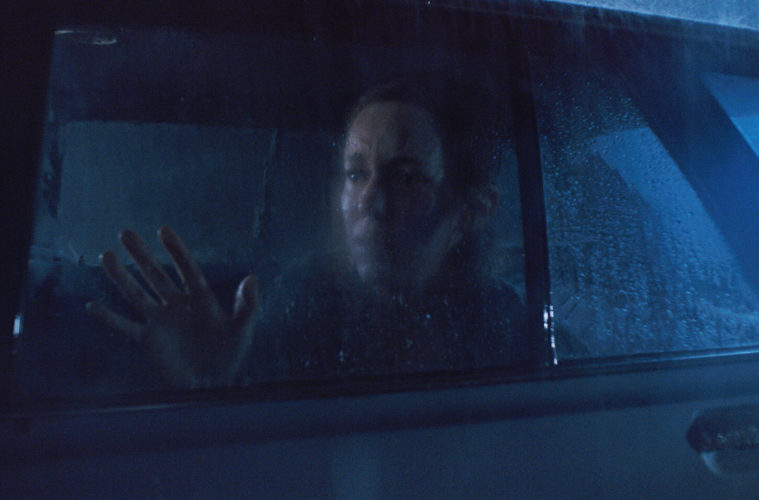 A lot happens during the course of director Matthew Pope and co-writer Don M. Thompson’s Blood on Her Name … too much. This can prove problematic for what starts as a simple plot before things start turning convoluted real quick thanks to new revelations shedding light upon secrets and lies. Surprisingly, however, that perpetually escalating noise is justified. The reason stems from the fact that Leigh Tiller (Bethany Anne Lind) isn’t a murderer. Well, that’s not entirely true. Technically she is a murderer since she did presumably kill the man lying dead in a pool of blood on her auto shop’s concrete floor—an act that becomes the driving force of this entire endeavor. She’s just not a murderer in the sense that she did so with purpose.

If we’re being completely honest, none of the characters on-screen are. None of them are necessarily good people either. Leigh’s ex-husband is in jail for running stolen cars out of that shop. Her father Richard (Will Patton) is a cop whose role in a hidden indiscretion keeps bubbling to the surface of her memory in order to show us why she’s cut him out of her life. And her son Ryan (Jared Ivers) is currently on probation for blinding a kid in a fight. Blood is thus very much on the name Tiller exactly like the title suggests with crime serving as a major part of their DNA. It’s only Leigh who has that blood on her hands, though. And it scares her into making very poor decisions.

Or was it poor decision-making that made her kill a man? You’ll have to keep watching to find out which, but I’ll tell you now that it wasn’t pre-meditated. It wasn’t in cold-blood. Leigh is actually so distraught over what happened that she can’t bear to dispose of the body like she knows she should the moment she refuses to press send on the 9-1-1 call dialed into her phone. Her conscience won’t allow for it once she discovers her victim had a family (Elisabeth Röhm’s Dani and Jack Andrews’ Travis). So she acts weird, goes to suspicious places, and carelessly allows evidence to escape her en route to giving the body to his widow with a “sorry” note. Getting caught therefore becomes a foregone conclusion.

That’s why Pope and Thompson have no other choice but to throw the kitchen sink in as far as latent motivations and yet unknown backstory. Because we know what she did, that she didn’t mean to do it, and that she has pretty much gift-wrapped herself as the culprit for anyone paying attention, the drama and suspense lies in the emotional and psychological consequences of those actions. What does the guilt make Leigh do next? What are those who care about her (including Jimmy Gonzales’ Rey, an employee and friend) willing to do to help when/if they figure out what happened? How will Dani react once she starts walking backwards in her late-boyfriend’s criminal shoes? The chance for more bloodshed increases exponentially with every passing minute.

And Leigh is spiraling out of control as she tries to combat the mounting pressure of what’s occurring around her. There are drugs, an inability to lie when confronted point blank, and multiple wrinkles thrown in to flip the whole thing on its side. Through everything, however, is this idea that she isn’t a bad person. She says it about Ryan too regardless of his PO’s jaded rhetoric that says good kids don’t end up on parole. Mistakes happen. Mistakes compound. And eventually you might find yourself stuck so far beneath the surface that you must become a bad person to get out. It’s not like the Tillers lifestyle comes with a lot of luck or opportunity. Sometimes going deeper is your sole means for escape.

Therein lies the drama of Blood on Her Name’s climax. The film is only 80 minutes, but it’s not until the end that things really start moving because that’s when the time to act overcomes the desire to think. Similar to the central incident (one we’re introduced to after the fact and thus never see occur), the choice to kill or be killed arrives and we wonder what being “good” will get Leigh. It’s already got her facing a murder charge (or worse), so things aren’t looking great. But there is something to be said about honor and sticking to one’s code. Even though she has “crossed a line,” it’s still a line she wouldn’t intentionally cross again without reason. Maybe that’ll be enough to save her.

Or maybe it won’t. These are people backed against a wall—not psychopaths. So just as panic forces Leigh into numerous tactical errors, that same anxiety will surely push others to act accordingly. The last ten or so minutes therefore prove unpredictable since everyone’s frayed nerves make it so anything can happen. I would have liked more of that ambiguity for the first hour to counter the otherwise generic plot progressions used as set-up, but the result goes a long way towards making up for what can feel like a slog of conveniently ill-informed decisions. Give credit to Lind for this because we feel her uncertain fretfulness from frame one. Her Leigh isn’t dumb. She’s merely acting on impulse and adrenaline to make things infinitely worse.

Blood on Her Name hits limited release and VOD on February 28th.