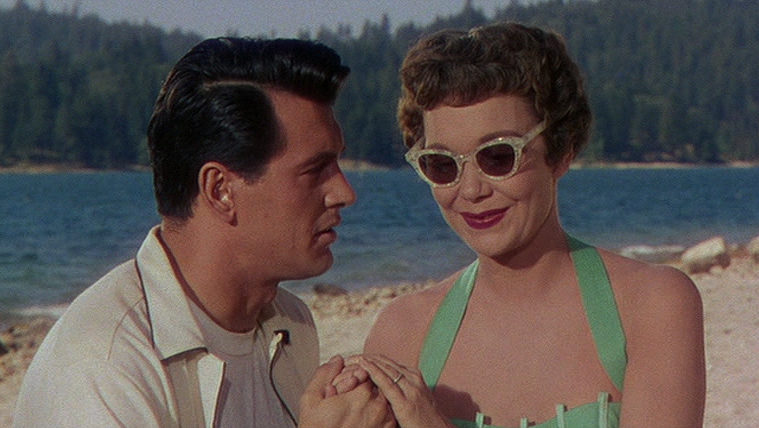 While it sometimes comes across platitudinous and trite, one cannot stay in any conversation about arthouse film more than five minutes without hearing the phrase “auteur” tossed out. It has become a tad sterile, but, as Andrew Dudley pointed out in The Major Film Theories, it is a valid form of critical theory. So for an August Blu-ray round-up, the conversation will revolve around three classic Hollywood “auteurs” and films from each that often go overlooked. Kino Lorber released Billy Wilder’s critique of war-time Hollywood, A Foreign Affair; the Warner Archive presented John Ford’s passion project Wagon Master; and Criterion added Douglas Sirk’s first foray into widescreen Technicolor, Magnificent Obsession, to their illustrious collection. While each release is a fairly underrated title in their director’s larger filmography, a close watch unveils tricks and tropes that each respective filmmaker would later use in their more popular works.

Billy Wilder, who entered WWII mostly known as a screenwriter for Ernst Lubitsch, immediately emerged from the war and won Best Picture for The Lost Weekend. In 1947, Wilder returned to begin a full-on assault against the very Hollywood that raised him. Angered by the Production Code and its lack of empathy in World War II, Wilder made Foreign Affair as a way to air his grievances. The film centers on a US Army captain (John Lund) who must choose between the seductively enticing German cafe singer (Marlene Dietrich) or the uptight American government official (Jean Arthur). Wilder was still cuffed by the Code and Postwar politics but managed to deliver quite a blow to Hollywood with regards to how he felt they were handling artistic integrity and creative expression. While Wilder is mostly remembered for his work from 1950 through the early 1960s (Sunset Blvd., Some Like it Hot, The Apartment), the traces of his genius can be found all the way back in the late-40s pictures. In an interview with Cameron Crowe, Billy Wilder noted that A Foreign Affair was one of his favorite movies that he made.

While Wilder was getting his start in the Postwar era, John Ford basked in the glory of it all. He had already made John Wayne a star with Stagecoach, reinvented the war documentary with The Battle of Midway, and won an Oscar for Best Picture with How Green Was My Valley. So it becomes interesting to hear him tell Peter Bogdanovich that Wagon Master was his passion project, one of his favorites to make. It finds Ford following a Mormon wagon train winding its way across the American Southwest up to the San Juan River Valley with two rogue cowboys leading the charge. For fans of Ford’s more commercial work, Wagon Master may fall flat. It doesn’t have the star power of his other films, the widescreen form, or even the action of most westerns, but it is in these negations where Ford thrives. As mentioned by Dave Kehr, Ford’s central themes are community and how to build one; Wagon Master finds itself well within this parameter. Here, Ford weaves a beautiful tapestry of his perceptive eye for the sweeping landscape shots, coupled with the rather simple storyline of sheer movement, which has led many critics to refer to this movie as a “film poem.” Ford’s filmography is exhaustive, but by the time you sift through the commercial layers at the start, one begins to see what a beautiful canvas the West was for Ford and how he could easily wield its frenzied power to his advantage.

Douglas Sirk is, unfortunately, not always considered in the same pantheon as the aforementioned auteurs, despite being a major influence for directors such as Rainer Werner Fassbinder, Pedro Almodóvar, Todd Haynes, and even Tyler Perry. Known for his widescreen melodramas, Magnificent Obsession was the German director’s first venture into the Technicolor form. Rock Hudson plays a wayward billionaire who, after crashing his speedboat, must use the only resuscitator machine in town to revive himself; immediately, one of said town’s most beloved doctors dies as a result of the medical shortage. The realization in the aftermath of this entire incident convinces Hudson to completely change his ways and become a lover and caretaker to the blinded widow. The logline is a hard sell for some viewers, yet melodramas that require the most suspension of disbelief bring the best out of Sirk. Coupled with his understanding of color palettes and coordination of blocking for maximum emotional weight, these stylistic choices are enough to forgive a story that is, at first blush, overly sentimental. In the accompanying Criterion essay, Geoffrey O’Brien notes that prior to Magnificent Obsession, Sirk’s film and theater career was already successful. But as history tells us, Magnificent Obsession was just the threshold to the director’s wonderful ability to utilize the forms that would come to define the glorious Hollywood melodrama of the ’50s and beyond.

Of all of the special features across these three discs, be sure to catch the Peter Bogdonavich, John Ford, and Harry Carey Jr. commentary on Wagon Master; which will encourage one to put the film on loop. While “auteur” has lost its meaning a little in a marketing world where every other director is a “visionary,” when taking a step back and recalibrating it, one has a clearer appreciation for a director’s touch on even their lesser-known works. These three directors have arguably more popular pictures than these, but it cannot be stressed enough that these new home releases are just as important to their complete filmography and offer a more granular look at how they fit into the post-war American cinematic landscape as a whole.