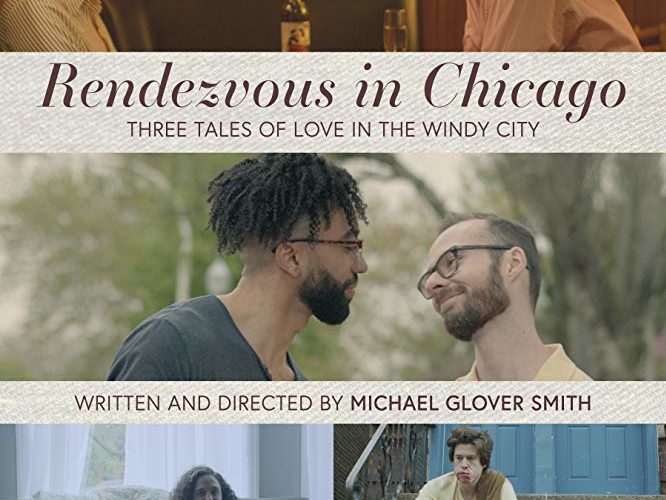 There’s a reason the first word in Michael Glover Smith’s triptych Rendezvous in Chicago isn’t pluralized despite consisting of three distinct stories. It stems from the fact that Smith sought to close out his cinematic trilogy about on-screen relationships and communications within (Cool Apocalypse and Mercury in Retrograde are the others) with the three possible stages of a romantic union. Rather than call each chapter a rendezvous, the title is referring to our engagement with them as the beginning, middle, and end of a single passionate affair (complete with the potential for getting back up to try again). The agreed-upon time and place is therefore whenever you sit down to watch the film and its characters’ hometown of Chicago, Illinois. The date is between you and love.

We become an intentional voyeur as these couples traverse the tenuous divisions between public and private life. I say “intentional” because Smith’s script ensures we understand this role in a way that comes as a welcome surprise to render the whole as much a thesis on how we as viewers interact with cinema as being about how the characters interact with each other. He’s showing that we become a piece of the art itself via the act of experiencing it—our emotions, understanding, and enjoyment dictating its worth and beauty. In order to do so with as few preconceptions as possible, he also subverts patriarchal conventions so the romance can shine brighter than its genre tropes. Smith has thus manipulated the film where most filmmakers would manipulate us. Even though “The Brothers Karamazov” begins with Paul (Kevin Wehby’s man in a celebratory mood) approaching Delaney (Clare Cooney’s doctoral candidate and serial procrastinator), he quickly loses control once she flips the table by both sexually objectifying him and sexually empowering herself. While “Cats and Dogs” is always going to be about a marriage proposal considering Rob (Matthew Sherbach) can’t stop fretting about the ring box in his pocket, the antiquated notion of a “perfect scenario” is replaced by the desire to confirm his love (Rashaad Hall’s Andy) is the perfect partner. And while “The End is the Beginning” allows Julie (Nina Ganet) to attack Wyatt (Shane Simmons) for his affair, it also provides her the room to self-reflect without pretending he deserves a role in the process.

So we get to truly see the people in these vignettes above their circumstances. The first chapter is my favorite in this regard because it has a lot of fun with the act of domination and how no amount of confidence can stop Paul from always being the one forced to react (as a child opposite his babysitter and now opposite Delaney). It places consequences on his actions that prove refreshing thanks to the gender reversal taking him out of his comfort zone—even if they’re innocuous by comparison to those women confront while in the gaze of potentially abusive men. How does he respond to being in the hot seat and how much fun is it for her to know she can keep him there? Chapter two is a nice change of pace then because it relies on the sweetness of love that forms after the combatively flirtatious courtship period depicted by Delaney and Paul’s “strip Russian literature” challenge in public has evolved. By showing Rob and Andy on their way to the beach of Lake Michigan, we get a sense of just how safe they feel with one another. The scowl earned by a verbal jab is one of warmth rather than uncertainty; the public calling out of the other’s adoration for dogs over cats or vice versa with random strangers is devoid of any malicious intent. How the “games” we play within relationships expand and transform is fascinating to witness from the outside because that shift is imperceptible from the inside.

So too is trust. Julie shouldn’t have to worry about calling ahead to tell Wyatt she’s coming home early. She should be able to surprise him with cupcakes without wondering if another woman will be in her bed upon arrival. Watching their respective reactions to the scenario shows just how drastically their relationship has changed since she’s ready to throw him out the window despite it not being a big deal to him. In Wyatt’s mind everything has been working fine regardless of his cheating, so he can’t fathom how everything would end so abruptly because of it. Since Julie is blindsided, however, the betrayal is fresh, raw, and inexcusable. Lies carry different weight in different situations. Paul’s flirtatious fibs are cute. Wyatt’s life-altering deception is not.

Smith is thus providing examples of how unique situations affect the otherwise identical ways in which we communicate depending on what’s at stake. While Paul, Rob, and Wyatt are all trying to manipulate Delaney, Andy, and Julie respectively within their current dilemmas, their motives couldn’t be any further apart. Paul is trying to break the ice knowing he loses more from not knowing whether Delaney is conducive to his advances than discovering she isn’t. (She’s testing his resolve to see if he’s worth that attention.) Rob is using authentic conversations to gauge Andy’s thoughts naturally and instantaneously with humorous provocation (which he ultimately copies for his own edification). And Wyatt is simply buying time Julie isn’t interested in providing because she’s already given him too much.

Will Delaney decide Paul is worth her time? Will Rob pop the question after what he learns? Will Julie give Wyatt the opportunity to defend himself and earn forgiveness? These questions are great to ask now because Smith asks them too. He throws us into these characters lives at times where impulse and honesty are all that’s at their disposal. Each chapter therefore unfolds on its own with as much levity as heart thanks to Smith understanding that they must progress on their terms rather than his. The same goes with Julie and her final scene partner even if that person is an unlikely suitor. Or maybe he/she is the likeliest of them all—someone who willingly (if not consciously) chose to inject themself into her story’s end.

Rendezvous in Chicago plays at the Buffalo International Film Festival.