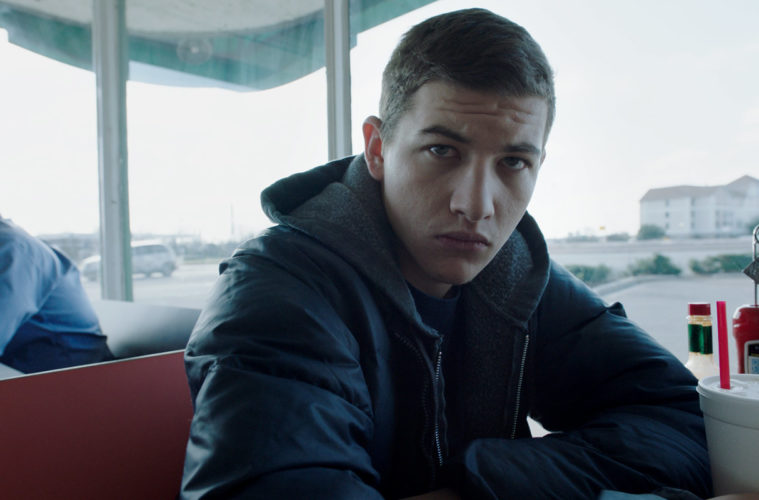 The only thing worse than never getting your happy ending is having it within grasp and realizing you cannot accept it. To see salvation and turn around knowing it would be a lie is the type of heartbreaking choice we often have to make in order to keep on going. It’s the decision that separates man from monster: an admission of remorse, guilt, and regret. Our actions cause ripples that affect countless others we haven’t met yet or never will and while that truth allows some to sleep at night, the rest wonder what nightmares the collateral damage of their deeds endure as a result. You could say that the only thing separating those two groups is love. Knowing love is to understand its power and its pain.

This idea is at the core of A.J. Edwards’ Age Out and his lead character Richie (Tye Sheridan). Here’s an eighteen-year-old foster kid who’s finally aged out to cut his own path. Quiet, troubled, and sad, we can tell his life wasn’t one with much joy. But he wants to be good. He wants to get a job and contribute to a society that’s more or less let him down. It won’t be easy for someone who admits in a psych evaluation that he’d pick a party over the library every day of the week, but anything is possible with the right people surrounding him. Anything is possible if he can simply keep looking forward rather than back because opportunities diminish with every attempt to shortcut life. That urge is difficult to quell when it’s all you know, though. When the best thing a foster parent taught you was how to pick a lock, that sense of gray morality becomes a part of your identity. So when Richie finds himself in need of a couple hundred dollars and discovers he hasn’t been given the tools to acquire it by legal means (or the social skills to earn the trust necessary for an extension that we’ll later learn he probably would have been given), he resorts to petty theft. Unfortunately for him, this decision carries consequences far beyond his anticipation as he awakens to the police investigating a robbery and a murder. Suddenly his latest misjudgment risks complete destruction and he has nowhere left to turn.

Utilizing the style he honed as Terrence Malick’s editor and on his directorial debut The Better Angels, Edwards supplies Richie’s inner turmoil through poetic imagery. We see the raucous nature of a teen running wild with new friend Swim (Caleb Landry Jones), the sterile yet optimistic expanse of employment with his hands outdoors and the calmness of hotel servitude, and the sweetly complex hope for more shared by a young woman with similarly sad eyes in Joan (Imogen Poots). We can see these two characters as a demon and angel perched atop his shoulders: one able to bring out the worst in him and the other the best. And all the while Detective Portnoy (Jeffrey Wright) looms to force Richie into deciding which road his heart truly desires. It’s the fork that will define the man he is and who he can become. One option will keep him in the claustrophobic uncertainty of isolation (as represented by the film’s full frame aspect ratio) while the other can reveal a freedom without boundaries built upon trust, kindness, and love (as briefly depicted via a widescreen interlude). Both are feasible because the former’s exploits devoid of promise are as comfortably familiar as the latter’s dream is masked by fear. Will he let his past dictate his present or become that which he never knew he could until Joan came along? Will panic cause him to trip and fall again or will he allow himself to accept the fact that he deserves more — that he can earn his happiness?

These aren’t easy questions to answer as Edwards purposefully shrouds Richie’s night of crime in secrecy before exposing some as yet unknown connections to it shared by Swim and Joan. So our wheels start churning as far as what really happened behind closed doors and what the truth will do to those left reeling in the aftermath. We pull for Richie and hope he sees Joan as a reason to not run for once in his life despite things looking insurmountable. We pray he’ll see Swim for what he is: a mirror showing what happens when he chooses the wrong road. But it’s hard not to disconnect from this potential destiny when the people in Joan’s world are so quick to dismiss him as being unworthy on sight.

Jones is as creepily smug as usual, always knowing more than his unsuspecting victim to retain control. Wright is authoritative yet compassionate in his small role, appealing to Richie’s humanity so as not to cause more trouble if he’s in fact guilty. They exist to place the lead in a corner and see what might happen next. With the former Richie is unbridled and free, able to do whatever he wants without having to worry about guardians or watchdogs checking clocks for curfew. With the latter he’s back to being a scared kid in over his head, one who bucks authority despite very clearly understanding its purpose. They’re playing roles with which to manipulate him and if Richie’s not careful one or both will succeed. That therefore leaves Joan as his equal. She’s as important as Richie even if we don’t know the extent of how until the last scene. She’s his connection to a happily ever after — a kind soul who looked past what others so quickly misjudge to see this young man as whom he always wished he could become. Poots gives a wonderful performance, shifting between being the catalyst for Richie’s necessary evolution and the one who needs him even more than he might need her. There’s warmth to her actions and maturity to her caution born from mistrusting herself rather than him. She’s his escape; his reason to shut the door on his past forever. Just being with her opens his eyes to bliss and his heart to shame.

It’s this shame that defines Richie and what Sheridan excels at providing the character from frame one. He’s playing a foster kid who’s been kicked around and abandoned so easily that he’s had to adopt a thick skin to cope. But no matter how tough his exterior, he’s unable to hide his suffering. When he smiles with Swim there’s aggression and when he smiles with Joan there’s relief. This is the crucial juxtaposition that Edwards supplies because these two halves of this complicated whole are ripping him apart. Eventually he’ll have to confront who he was and accept the consequences of what he did and/or didn’t do. The sacrifices he makes confront them are what solidify his humanity. Because you can’t run away when your pain is deserved.