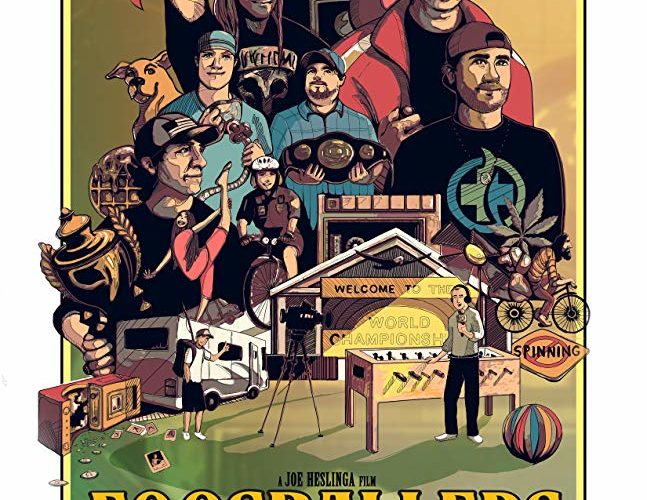 Sports documentaries are generally allowed to make some assumptions. Talk about baseball, football, basketball, hockey, or soccer can gloss over the structural details and rulebooks because those coming to watch a story about a certain player or team are already fans of the game itself. When you move into a fringe sport in the vein of foosball, however, filmmakers like Joe Heslinga can’t afford that luxury. So he and writer Mike Wagstaffe must find a balance between the personalities of the top players, the history that led to where things are today, and the sport itself. They must dive deep and provide evidence that foosball had million dollar purses in the seventies because I wouldn’t have believed that truth without proof. It wasn’t always a recreational bar game. Just saying that seems weird these days considering it’s not even that anymore—at least not in my neighborhood. We have billiards, darts, and the occasional table shuffleboard set-up. Until my uncle bought one a couple years back, though, I hadn’t seen a foosball table in over two decades. So when Heslinga’s Foosballers opens up with Tony Spredeman and his family talking like he earns his living by playing around the world, I had to laugh. Hearing about Ryan Moore’s cannabis dispensary, Robert Mares’ awning company, Terry Rue’s anesthesia practice, and Cindy Head’s law enforcement career made more sense because it resituated the game as a hobby. Shifting towards Todd Loffredo (doubles champion at seventeen in 1977) and rewinding forty odd years then brought necessary context.

It’s through Todd’s longevity that we meet some of the game’s retired greats including Lee Peppard, the man who built this European phenomenon into the eighth largest sport in America during the 1970s. From that heyday of game rooms letting kids of all ages and backgrounds learn a quarter at a time to the advent of videogames putting foosball to pasture with higher profit margins and cheaper upkeep, we get a crash course in the roller coaster journey that’s ultimately led us to the current International Foosball Promotions’ Tornado Championships. Loffredo is therefore positioned as a living legend—the one pioneer who stuck with it and remains a top player five decades since his start. The purses have depleted more than a hundredfold, but his love never wavered. That emotion becomes the driving force behind the film because you don’t become a professional foosball player without passion. The athletes Heslinga interviews all possess it even if many have had to let that dream die in order to find “real” jobs instead. Some got into the game because their parents played (Moore’s mother Mary runs the IFP and Tony’s father toured around the country) while others did so on a lark (Mares started on a derelict table his local arcade was raffling off to make space). Of everyone we hear from, the six mentioned above (Tony, Ryan, Robert, Terry, Cindy, and Todd) are currently on what constitutes a circuit and thus preparing for the latest championship in Kentucky by honing their snake and pull shots.

The first hour is dedicated to this period with the regular injection of historical context via tragedy and/or against all odds elation. Mares shows off his trophy room and explains how he can’t choose just one as the “best” (stick around during the credits for a hilarious call back to this scene). Loffredo details his meticulous training regimen of marking his table to pick apart opponents’ defenses. And Rue introduces his family of champions with wife Keisha and daughter Sullivan each having trophies to their names. Add Cindy’s background as a forty-time world victor with Tony playing for an undefeated season and the storylines are plenty and intriguing. By the time the tournament begins (the final thirty minutes), it’s difficult to cope with knowing only one can win. It’s also completely captivating, though, since we have no clue how it all shakes out. Six-time runner-up Mares looks to finally take the crown while Tony seeks to tie the world record for most men’s IFP single’s titles. Terry hopes to transfer his previous year’s win in doubles (with Mares no less) to the singles bracket while Cindy tries to extend her domination of the sport against young up-and-comers. Ryan is desperate to step out of Tony’s shadow and become world number one while Todd continues to defy the odds despite newer athletes speeding the game up like he couldn’t imagine back in the day. And since they’re all the best of the best, we know they’ll have to beat each other to advance. The suspense is real.

Credit Heslinga and his subjects for this because they each endear themselves and the game to the audience. It would have been easier to put together a pure biography of the sport, but you’d lose the excitement and enthusiasm these current masters all bring. They feel like a family (when not head-to-head at a table with money on the line) because they know how precarious this ecosystem is. While players like Frédéric Collignon in Europe have been able to maintain interest due to the continent’s love of all things soccer, Americans must be selective since keeping their skills up can’t interfere with keeping their mouths fed. Like Terry says later on, though, it’s worth it to say you’re the first/second/third best in the world. That carries weight.