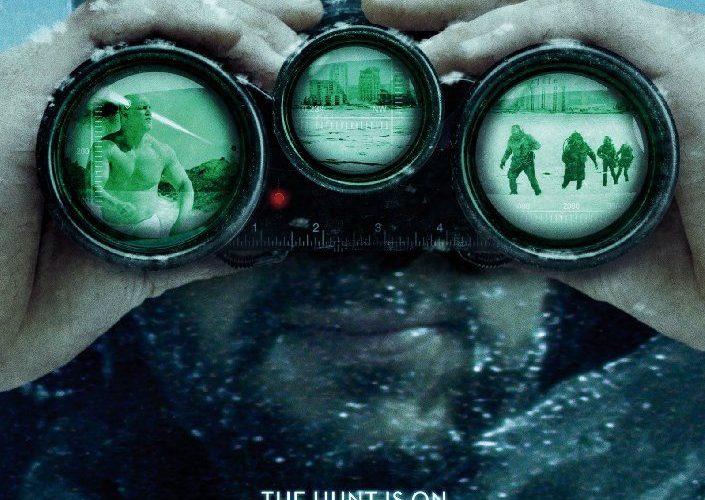 The year is 2307 and Earth is three centuries removed from climate change transforming its surface to glacial ice. Humanity has evolved to living underground, improving technology to help sustain their tenuous ecosystem outside of the subzero temperatures. This includes insulation injections to combat cold for up to 48 hours, strength enhancements, and even artificial intelligence boosters. It also led to the manufacture of a synthetic Humanoid race as slave labor. Super-strong, immune to the elements, and unable to reproduce, they do all the things we can’t in this new world wrought from a hubris that’s allowed the year to mark a second anniversary: five years since ASH-393 (Branden Coles) broke free from his “chains” to lead a devastating Humanoid rebellion that’s yet to be neutralized.

It’s a pretty terrific concept for a sci- actioner with philosophical elements delving into the idea of history and our inexplicable ability to never learn from our mistakes. While born from a short film idea by lead actor Paul Sidhu — one admittedly steeped in politicized notions towards climate control and global warming thankfully pushed to the background as expository world-building rather than plot-specific detail — writer-director Joey Curtis took the reigns to help turn 2307: Winter’s Dream into a dark thriller in the vein of Pitch Black. Revenge enters the equation once the personal impact of ASH-393’s revolt on Spartan-7 commander Bishop (Sidhu) is revealed. As though losing his wife Mara (Cecile Namer) in the chaos wasn’t enough, ASH also took his unborn daughter from her womb in his escape.

What follows is the hunt for this enemy in Arizona’s frozen tundra’s “Dead Zone 714”. Bishop is brought out of a half-decade-long “Q-vapor” stupor by General Trajan (Brad Potts) to finally take ASH out with the motivation of retrieving his daughter in the process. On the team is friend Ishmael (Timothy Lee DePriest), gung-ho Cage (Harwood Gordon) and El Hatta (Kelcey Watson), and trigger-happy wildcard Kix (Arielle Holmes). Fitted with insulation enhancement and a cache of top-of-the-line laser gear, Bishop makes sure they take analog weapons like knives and “old-school” guns as well, since the “dead-zone’s” electric field may render the bells and whistles obsolete. He’s the only one who understands the mission’s true danger and the first false step shows us how right he was.

This all sounds familiar because it is. Curtis and company utilize tried and true genre tropes throughout, but they pick the right ones to curate into this new adventure. You have the traitorous cohorts, duplicitous puppet master, potentially misunderstood target, impossibly superior foe, and hidden allies ready to assist our hero as well as help explain how things aren’t quite what they seem. No molds are being broken, but nothing is being misused either. This is a commendable feat when so much drivel (with exponentially bigger budgets) hitting theaters each week do so without regret. Winter’s Dream is shoestring in comparison, looking as good as it does thanks to Buffalo, New York’s record-setting snowfall in 2014. These arctic scenes aren’t soundstage constructions; they’re all Lake Erie frost.

So for every hiccup — from easy-to-parse twists to an almost boredom-inducing severity in each performance (including Bishop’s forcefully delivered narration) — there’s the stunning revelation of on-set struggles — costumes that barely kept actors from going hypothermic, let alone shirtless “Humanoids” braving insane temperatures — extreme stunt work from local ice climbers on cliff faces, and decent special effects, considering financial handicaps. You know this endeavor was a labor of love between artists and producers who found ways to make Winter’s Dream‘s look how it did in their heads without studio interference. This allows for an uncompromising vision: something science fiction craves to set itself apart from other cinematic genres more-or-less molded in post-production. Curtis’ script must move deftly, precisely connecting past and present for what’s coming to make sense.

It’s therefore okay to roll your eyes at Kix’s over-the-top insubordination or El Hatta’s deep post-quip cackle, whether funny or not. We can understand why these soldiers have this mentality — they’re military agents with thrill-seeking bloodlust inside a world that doesn’t appear to have offered much happiness for quite some time. If the desolate ice becomes our own future, travel 300 years forward and see if your relatives didn’t grow unmoving and jaded, too. Ultimately, some of this steel-faced cheese is exactly why audiences flock to films with horror elements (e.g. Humanoids biting off human faces), anyway. The hope is that Bishop’s newfound lease on life to rescue his flesh and blood sustains our emotional investment enough to let the adrenaline rush prevail.

Curtis isn’t afraid to kill his characters, either, so there’s some suspense along the way, with ASH picking them off one-by-one. New characters found in the “dead-zone,” despite its insane environment, pop up to flesh out the mythology (lost generations of Spartans) and humanity’s unyielding desire to survive as free citizens (Anne-Solenne Hatte‘s native Atka who was raised outside the establishment). Again, though, while each revelation feels authentically in earnest to the plot, it’s hardly groundbreaking. This is post-apocalyptic dystopian stuff where everyone’s back is firmly pressed against the wall. It’s difficult not to shoot first and ask questions later in this scenario, but those who do always rise up as heroes. Events could have taken bleaker turns for greater impact, but hope isn’t necessarily cliché.

Not everyone’s going to like what Curtis and company have created, and some won’t be able to look beneath the surface of its budgetary constraints (even if the crew did a damn fine job considering). I would’ve liked more depth to the characters surrounding Bishop and ASH-393, whether they’re fundamentally expendable or not, but the plot itself does chug along by using them with welcome efficiency. That’s sometimes enough where this type of action-packed sub-genre of science fiction is concerned, being that you’re watching to see what happens to the bigger picture more than the handful of people letting you tag along. And Winter’s Dream‘s world-building is by far its best attribute. Those of us able to reconcile what’s lacking against that success should have a good time.