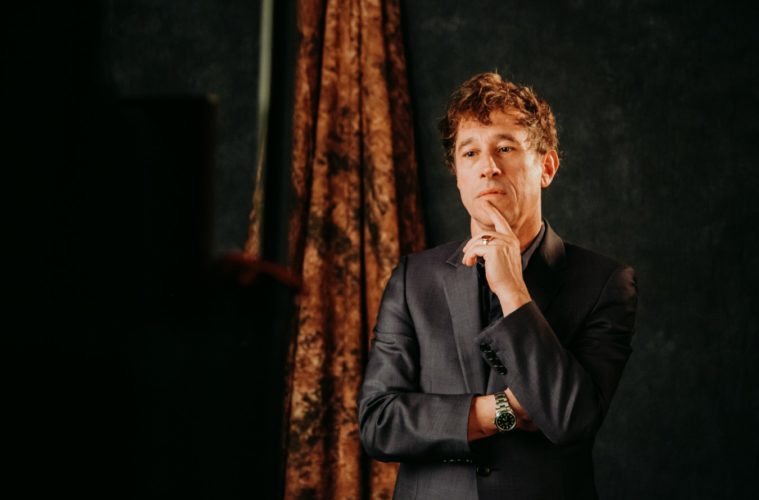 Bertrand Bonello returns to the New York Film Festival with Zombi Child, which follows Mélissa (Wislanda Louimat), granddaughter to Haiti’s most famous zombi, Clairvius Narcisse, and an immigrant to France whose parents died in the 2010 earthquake.

Mélissa’s friend Fanny (Louise Labeque) wants her to join a secret group of girls at the prestigious Légion d’honneur boarding school, but the cliquish group of privileged white girls (who exude a coven vibe) conflict with Mélissa’s cool, unconcerned appeal. Mélissa’s confidence comes from a conditioned sense of her grandfather’s oppression and enslavement by zombification. As Fanny is drawn deeper into the roots of Mélissa’s voodoo heritage, all hell breaks loose when she uses it for manipulative ends.

We sat down with Bonello at the 57th New York Film Festival to discuss meeting real-life zombies, the great lengths he went to respect the Haitian tradition of voodoo while telling a taboo story, using Clairvius Narcisse’s zombification to contextualize contemporary cultural tensions, and recruiting historian Patrick Boucheron to explain how liberalism obscures liberty.

The Film Stage: Did you meet anyone in Haiti who is or was a zombi?

Bertrand Bonello: No, you know it’s something that’s very taboo in Haiti. It’s part of their history, but it’s a dark side of voodoo. People don’t like to talk about it. On the first trip we made, which was maybe the most important, it was to do some location scouting and casting, but it was to meet some people and make the project accepted by them. Me, being a white Frenchman going to Haiti, saying I’m going to make a film about voodoo and zombies, they don’t trust you—and they are right in a way—so we had a lot of meetings talking with the intellectual part of Haiti to explain the project’s point of view. People tell me zombies might exist, but it’s not so clear. Even my zombi, Clairvius Narcisse, who is someone who existed, some people say maybe it’s not true. Though I saw some videos on YouTube of people who have been zombified… they’re not in a very good state. When I was casting I met thirty guys and they all did their zombi in the same way. I didn’t direct them. It’s so much a part of their history, they know how to do it. They know how to walk and the weird sound they make with their voices.

How were you received in Haiti?

There were reservations and I understand that–it’s normal. Voodoo and zombies have been used to make the country look terrible in the 1930s during the occupation of the Americans. Voodoo is something very positive, so of course they were a little skeptical. I had to spend time explaining the film and why I was doing it. They realized I had some knowledge and I was not there to make a horror movie about things that are important to them. I had a historical and political point of view of the idea of making a film about a zombi, taking this pop figure back to its origin. We talked about slavery and even more so about colonialism in Haiti. Little by little we were accepted in the country and we had some people who really helped us.

Why did you want to make a film about Clairvius Narcisse’s zombification?

About fifteen years ago I was very interested in Haiti. My ex-wife was shooting a film there and she was telling me so many amazing stories about the country. I started reading about Haiti and their history is so fascinating in that they are the first black country that became free. When you get an interest in Haiti, you quickly go to voodoo and zombies. I read Clairvius Narcisse’s story and it stayed in my mind because it’s so amazing. A year and a half ago, I was searching for a film I could make not in France. I need to go away and have a different frame of thinking about how to make a film. This idea came back to me: what is a zombi? What is my zombi? It’s just a man that walks for many years with his head looking at the ground. This image was a strong starting point for making a film, then I built the rest. Most of the rest is based in France. You don’t know why something you’ve known for a long time, at one moment, becomes evident that’s going to be your new film. It just happens.

You wanted to shoot in Haiti, get inspired, and bring that to the French shoot, but you had to shoot in France first. What would have shooting in Haiti first done for the film?

Because Haiti would have been so unknown for me, when I had filmed the French part it would have felt fuller. But it was a difficult year for their country with lots of struggles, so we couldn’t film there first. I shot first in France, edited that part, you do what you can when you make a film. So many problems appear.

Narcisse’s granddaughter Mélissa has zombi-like traits, but she has it under control, like it’s part of who she is, but isn’t controlled by it.

She’s a young girl who spent half of her life in Haiti and half in France. So she’s culturally mixed. She knows the story of her grandfather, probably because her mother or aunt told her; she knows the story, she can’t tell it. She’s also French and European and for her, zombies are also the zombies we all know. One subject of the film is what do you do with your history? For Mélissa, she’s the granddaughter of a zombi, what does she do with that? For the Haitian people, what do they do with their history? They know what to do, they’re strong people. For French people, what do we do with our history? The history teacher says at the beginning of the film we created the art revolution and the idea of strong freedom, liberty, but are we really being that good about it?

The two currents of liberty in the 19th century was the only prompt I gave him, the rest is his lesson. In the days we’re living it’s very clear. The freedom of capitalism kills a lot of people, but I was surprised in his lesson he was so close to the movie in many things. Not only the history lesson, but how he says it. For example, how can we tell a story? Can we tell it in a straight way or in a weird way, which is exactly what I did with the film. What is having an experience? That’s what happens to the French girl Fanny. In a way the whole film is his lesson. I could have stopped the film with his lesson and said it’s done.

The American version of a zombie is more of a monster, eating brains and flesh. What do you think of that addition?

There’s a history of zombies in the movies. In the 1920s there was a book called “The Magic Island” about Haiti and there’s a chapter about zombies. Just after 1931 I think, you have the first zombi film, White Zombie, with Bella Lugosi and it’s still a Haitian zombi. Then you have I Walked with a Zombie by Jacques Tourneur which is still this kind of zombi, but then it disappears, it becomes something else. You have the films of George Romero where the zombi isn’t someone between life and death, it’s a dead man who came back because there isn’t any room in hell. Romero did very political films with that metaphor. Then you have zombies that are more for fun and entertainment. Now I think we’re going back with political zombies in film. It’s an amazing figure to talk about us and our fear of the foreigner and of what we are becoming. It’s a perfect figure to talk about the loss of humanity.

Are you working on another movie?

Yes, it has some genre in it, but it’s not a genre movie. It’s a big melodrama.

Zombi Child screened at the 57th New York Film Festival and will be released on January 24, 2020 at Film at Lincoln Center.