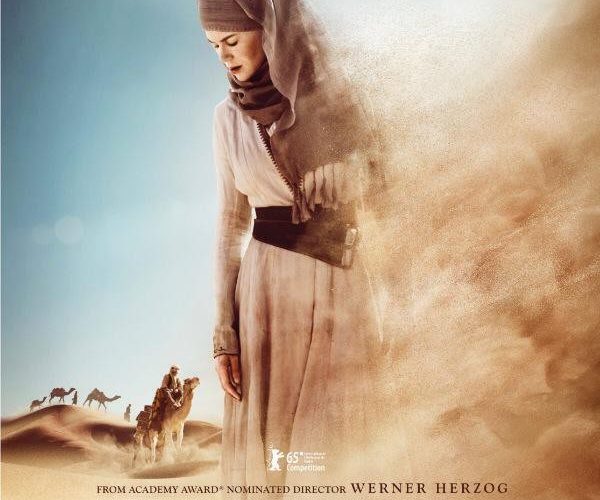 [Berlin Review] Queen of the Desert

From his very first feature, 1968’s Signs of Life, Werner Herzog has demonstrated a predilection for stories revolving around exceptionally zealous and uncompromising – if not outright maniacal – individuals. These individuals, thus far, have always been men. It’s therefore somewhat disappointing that the protagonist of Queen of the Desert, the first woman to be granted center stage in one of Herzog’s narrative features, is possibly the most conventionally drawn character in his oeuvre – a criticism that can be extended to the film as a whole.

Said protagonist is Gertrude Bell (Nicole Kidman), the English explorer, writer, archeologist, and political officer who played a pivotal role in the remapping of the Middle East following the collapse of the Ottoman Empire. At the start of the film she is a young lady recently graduated from Oxford. Fiercely intelligent and uninterested in the high society life of marriage and pampered comfort that expects her, she convinces her parents to let her pursue her ambition to discover the world and travels to Persia, where her uncle is the British minister of Tehran.

The Tehran chapter, which takes up far too much of the film’s running time, is cringeworthy. Bell quickly falls in love with one of her uncle’s secretaries, Henry Cadogan (James Franco), and the two embark on a romance so mawkish it’s difficult to believe it was penned and directed by a filmmaker of Herzog’s caliber. Neither actor is able to assume the material with conviction and the fact that Kidman is unmistakably middle-aged and over a decade older than Franco doesn’t lend their youthful dalliance any more credibility. Thankfully, the film is visually exquisite and this first portion is no exception. The opulent Bell estate, as well as the gorgeous desert landscapes, are captured in stunning widescreen shots, frequently employing cranes and drones to further emphasize the magnificence of the settings. The interiors are equally sumptuous, which combined with the impeccable costume design makes for a ravishing period piece.

The romance is eventually brought to an end, initially through Bell’s parents’ refusal to allow their marriage, and then, more decisively, through Cadogan’s death. Devastated, Bell vows that henceforth her “heart will belong to no one but the desert” and it is only then that the film finally comes into its own. It’s safe to presume this to be in large part due to Herzog’s empathy with the adult Bell, whose innate compulsion to return to the desert time and time again mirrors the director’s own towards the jungle. A lot of the credit also goes to Kidman, as her performance turns positively spellbinding, offsetting the script’s less plausible developments through sheer charisma. The rest of the film charts Bell’s travels through the Middle East, discovering the geography of the region and immersing herself in its culture. She encounters various historical figures, such as T.E. Lawrence (Robert Pattinson, in hilariously pretentious form) and the British Consul General, Charles Doughty-Wylie (Damian Lewis), whose first name is for some reason given as Richard in the film. Both these men, as well as the Emir of Ha’il, are smitten with her, but Bell is determined to continue her explorations unfettered by romantic entanglements. Although the film is ultimately a celebration of Bell’s numerous achievements, which are inseparable from her sex considering the time and place, it’s nonetheless regrettable that her love life should serve as the narrative thread, especially since this thread is formed through an absence of relationships. The film thus aligns itself with history’s obsession over Bell’s never having married – no biographical account fails to underline this fact – which may have been socially aberrant at the time, but from today’s perspective seems of minor relevance in the grand scheme of things.

The film ends in 1915. By this point Bell had not only become the unrivaled Western expert on the Middle East, but had also gained the respect and trust of the region’s leaders, prompting Winston Churchill (Chris Fulford) to seek her help in delineating the region’s borders anew. The closing scene, in which the future kings of Jordan and Iraq fondly thank Bell for her work, is a clear nod to the present, elaborated in the closing titles. These state that today Bell is still held in high esteem for being the sole Westerner who truly sought to understand the region’s culture, implying that this is sorely lacking in contemporary attitudes towards the region. The titles also state that Bell died in 1926, unwedded.

Queen of the Desert premiered at Berlinale and opens on April 7, 2017.