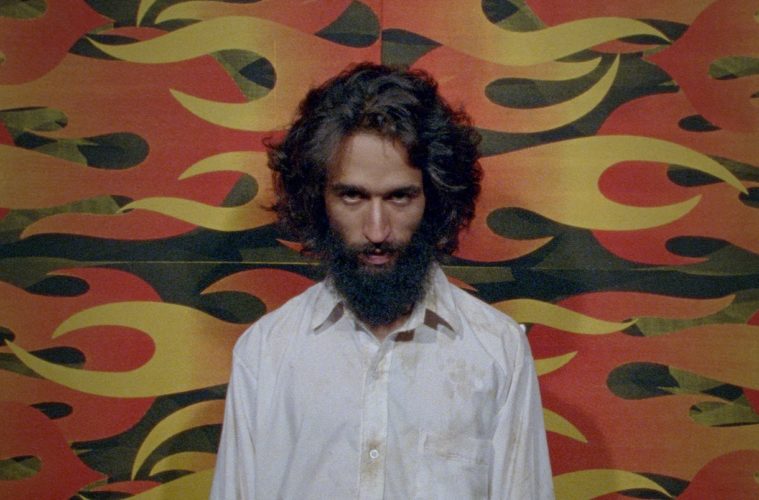 Succinctly potent like a concentrated shot of a mood-altering substance, Camilo Restrepo’s Los Conductos renders a Colombian portrait of a damaged soul reclaiming his humanity amidst widespread bleakness. In a swift 70 minutes, the lugubriously solemn film punctures one’s psyche as it interrogates a society’s moral corrosion that has normalized violence as the lone avenue to salvation for the marginalized.

Loosely assembled from the memories of its lead actor Luis Felipe Lozano, a man who survived a religious sect that seemingly doubled as a lucrative criminal organization, the ordeal begins with a gunshot and a motorcycle escape that non-verbally introduces Pinky (Lozano). The disheveled fugitive settles on a new warehouse before explaining himself.

Boasting a 1:33 aspect ratio, excellently employed to conceal visual information that amps its enigmatic aura, Restrepo’s debut also gains a timeless quality from being shot on 16mm and reveling on its graininess. There’s a stylistic earthiness that goes beyond the format, visible in how the filmmaker uses tactile motifs throughout: fabric printed with hell’s flames as backdrop or a revolver with the legend, “This is my life,” carved on the handle. Precise voice-over—truly not a single line is dispensable—is how Pinky communicates what led him to this dangerous, self-imposed exile from the group that he once thought satiated all his emotional needs.

He speaks of “the father,” a leader that passed cruelty for love, and the way he suffocated them into believing that any act, no matter how heinous, was justified for the collective benefit.  Out in “the world,” he is no longer one of “the chosen ones,” like his spiritual benefactor had inculcated him.

Free of overly meditative shots or sequences that don’t fulfill a narrative function, Restrepo chooses his imagery cautiously, to illustrate not exactly what his first-time actor says but to capture the environment that ignores him now that he’s a lone wolf, begging for work to finance his drug addiction. Clowns at the mall, a bootleg t-shirt printing business, or a bright city from above clash with the past horrors Pinky verbalizes.

With on-screen dialogue limited to a couple of sentences, Lozano’s performance, a fictionalized and imaginative take on his personal transmutation from brainwashed henchmen to liberated beggar, resides in his eyes and the half-smiles that creep in almost involuntarily and not when merited. Another character, Desquite or Revenge (Fernando Úsaga Higuíta), appears physically late in the tale, though his ominous voice comes earlier through the same tunnel Pinky used to run away–similar to a large tube or conduit.

Literally translated to The Conduits or The Ducts, the title refers both to Pinky and Desquite being vehicles to predicate a twisted message or eradicate it, and to a more intriguing metaphor involving the copper wiring or electrical conduits stolen from abandoned buildings to be sold and repurposed. Melted metal that’s purified through heat in a “perpetual resurrection,” as Pinky describes it, in turn, implies what the protagonist wishes for his own troubled existence. As these notions run through his mind, the aforementioned firearm, bearing a fateful inscription, becomes the hand of God, capable of changing his destiny.

Near its conclusion, Los Conductos departs from its stylized realism to evoke Jodorowsky’s grounded surrealism in a musically driven, phantasmagorical segment where Pinky and Desquite take on the roles of a story we heard earlier about a father who decides his son’s life is not worth saving. In that myth within the myth, the concept of the conduits returns, this time mentioned as holes that abound in an impoverished neighborhood and swallowing people and delivering them into a lurid underground.

Mind-bogglingly calibrated, Restrepo’s writing leaves little room for reproach other than perhaps further exploring the more bizarre realms we only get glimpse into. Yet, contrary to what the points discussed may lead one to surmise about the approachability of the piece, Los Conductos is by no means an undecipherable, abstract puzzle.

It’s carefully confected as a cinematic work yes, but also direct about its intention to denounce the conditions that drive someone to endure tormented circumstance in exchange for some security that institutions have failed to provide–not only in the specific nation where it unfolds but elsewhere as well. In closing the film with a few verses from Colombian poet Gonzalo Arango, the new auteur makes that clear.