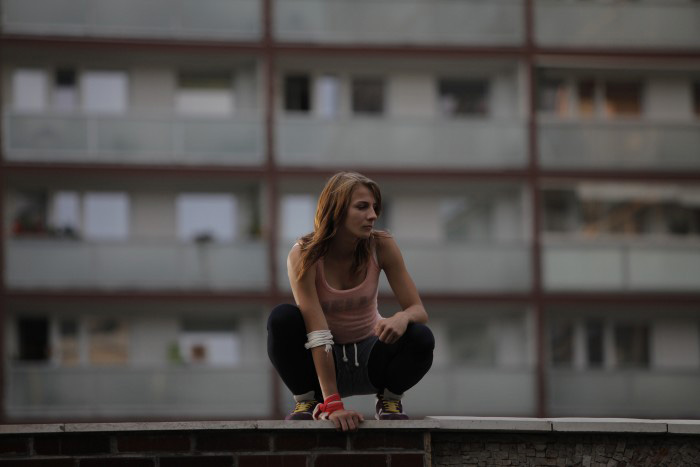 [Berlin Review] In Your Dreams!

The world of Parkour meets teenage coming-of-age angst in Petr Oukropec‘s In Your Dreams!, and it’s a welcome mixture. Whereas most sports inherently breed competition to the point that American films must delineate good versus bad or favorite versus underdog because they underestimate their audience, the urban appropriation of French Special Forces training (Parcours du combattant) here deals in the communal spirit of freedom. There’s a kinship between participants — one highlighted by the Prague group that Egon Tobiás‘ script creates — wherein “pros” and “amateurs” alike provide a safety net with which to simultaneously practice and improve their skills. Only a handful will be picked for young Alex (Jáchym Novotný) to videotape in hopes of entering a San Francisco competition, but no one gets turned away. This is a refreshing take on the genre for an American like me. While there’s a level of competition, courtesy of Laura (Barbora Stikarová) wanting to be included in this boys’ club of Parkourists, they invite her in without a second thought to practice alongside them and show what she’s got. It’s her own insecurities that keep her at arm’s length, speaking for both mental confidence and emotional distraction. Give this story to Hollywood and suddenly Laura is vying against another girl trying to “make the team.” It becomes an aggressive show of strength to win a spot rather than a means to express what it means to be a sixteen-year old yearning for adulthood adventure and love. That’s what Oukropec is ultimately delivering.

Participating in the Parkour Jam is In Your Dreams!‘s least important detail once you realize the personal struggles Laura faces. She’s a child of divorce who gets excited by her father’s (Ivan Martinka) daredevil climbing skills and stifled by her mother’s (Klára Melísková) desire for her not to also end up with a permanent limp. In order to get closer to that thrill, Laura must leave him and return home to spend the summer at home avoiding Mom so she can “jump” without her knowledge. Unfortunately, cutting the vacation short only adds more problems since she’s now present for her mother’s courtship with new boyfriend Ota (Jan Vondráček). Throw in a blossoming romantic connection with lead neighborhood Parkour heavyweight Luky (Toman Rychtera) and chaos envelops her. So conflict does finally arise, but it’s Laura against Laura as she fights to discover who she wants to become. Is it a girly-girl, like best friend Kája (Veronika Pouchová), so she has a chance to supplant Luky’s Paris Hilton-wannabe girlfriend Denisa (Martina Kavanová)? Or is it the adrenaline-rush-seeking wild child willing to free-climb a run-down building’s façade to prove that she can? And who says she can’t be both? Well, the fact that she can is where the film travels down a surreal path to suddenly split Laura in two. The latter version is what we witness in reality — the strong athlete Alex is falling for — and the former in comically melodramatic fairy tale dreams where she’s a princess and Luky her prince.

The line separating them blurs as Oukropec and Tobiás include plenty of visual mirroring to allow both worlds to bleed into the other. Characters’ actions start to repeat themselves, a fictitious dog manifests inside the real world, and one new friend (Adam Misík‘s Andreas) even attempts to utilize science to enter her vertigo-induced elevator fever dreams and help. Less science fiction than an Alice in Wonderland-esque imaginative filter, multiple “chicken or egg” conundrums pitting premonition against latent memory are introduced. The effect is an intriguing stylistic choice that gives every hormonal-infused internal wrestling match we experienced in our own adolescence physical form. And unlike Hollywood again, it’s not because of the boy(s). She’s on a journey of self-discovery wherein broken hearts simply make you stronger. There’s a lot going on, so it’s no surprise Laura falls hard into her subconscious to attempt reconciling everything away from the stresses of being a teenager. Every trope imaginable is included — whether love for the unavailable, stolen kisses with the object of your friend’s affection, or enduring a parent’s desire to restart a life in love — but none overshadows its place within Laura’s evolution from shy spectator to willing participant. There are a ton of misunderstandings and romantic disappointments, too, but they realistically don’t signal the end of the world. With that said, despite the script containing fairy tale moments, you shouldn’t be expecting a conventional happily ever after. And if one is provided, don’t forget happiness is purest if it comes from within.

That’s the message in the end. Behind all the cool choreographed stunts and trippy mind warps between life and fantasy is a young girl lost at her latest make-or-break moment. She’s on the ledge with the danger independence supplies laid out in front of her and a safety rope close enough to assist in the jump. That rope isn’t a handicap, though; it’s a tool. Our choices aren’t black and white, conservative and extreme. There is a middle ground that takes maturity to see beneath social cliché. Taking the leap with or without the rope is still making the decision to pave your own road. Whether assistance is available from family, friends, luck, or fate, accepting that support is crucial. The jump, however, is still your own.

In Your Dreams! premiered at the 2016 Berlin International Film Festival and is currently without U.S. distribution.