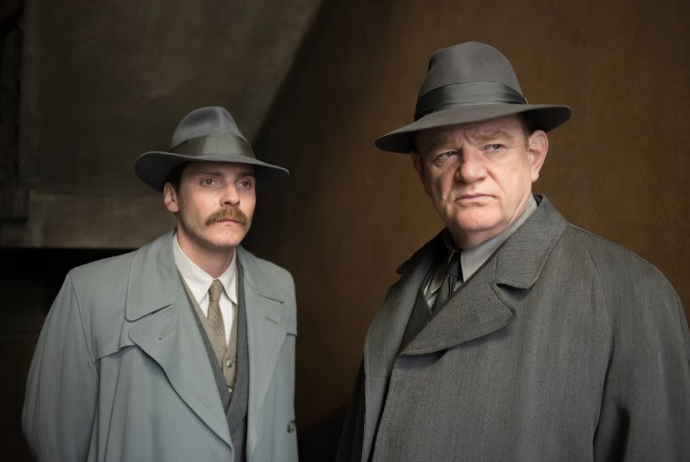 A simple act of defiance against the Nazi regime inspired German author Hans Fallada to write the novel Every Man Dies Alone. The themes of Fallada’s novel resonated and adaptations of the book were made in the ’60s in West Germany, the ’70s in East Germany, and the Czech Republic in the early 2000s. The latest adaptation, this time a U.S. production, again seeks to translate the power of Fallada’s prose for modern audiences in several ways.

Alone in Berlin has enlisted the dynamic Brendan Gleeson and the formidable Emma Thompson to play Otto and Anna Quangel, respectively. The Quangels are good Germans for their respective time and place. Anna belongs to a women’s group which enlists females to partake in keeping up the homefront while Otto is a mechanic building Nazi equipment. As the film starts, the city of Berlin shares in the Quangels’ complacency and optimism, given a recent military victory in France. These early vistas of Nazi youth squads, people cheering, and expansive views of sunny Berlin rendered in period detail are the strongest thing this film offers.

Whatever spell the Quangels are under regarding their beliefs and country are shattered when they are notified their only son was killed in the fight. Director Vincent Perez sets the stage for what should be a compelling study of dissolution and grief, yet is never able to follow through with the skill or tenacity the material requires. Rendered in melodramatic and predictable images (a hand resting on a rail, a light going off in the window), Alone in Berlin doesn’t delve deep enough into the metamorphosis of the Quangels.

It’s a drastic leap for them. They go from model citizens to creators of propaganda denouncing the war, the Nazis, and even the Führer, knowing their actions could result in death. That emotional arc is also muddled by a subplot regarding the Quangels’ elderly Jewish neighbor Frau Rosenthal (Monique Chaumette). This narrative digression has much to accomplish, most of all to link the film to Inspector Escherich (Daniel Brühl) and provide an impetus for Otto and Anna to rebel. Ultimately, this sequence of the film is so haphazardly assembled that it fails to fulfill the critical requirements.

Much of Alone in Berlin unfolds in this fleeting and unfocused fashion. A handful of characters (e.g. Nazi superiors or a kind mail woman) parade in and out of frame with various styles of fake German accents. Even our leads aren’t given the juicy material it’s known they could command an audience with. Gleeson internalizes his grief and is consumed by writing and leaving the propaganda cards around the city, which seems like a misuse of such a bold screen presence. Thompson, meanwhile, never sustains the accent long enough to be a credible German wife, let alone a credible traitor to the Nazis.

Much has been made at Berlinale regarding the decision to tell this story in English. German members of the press vocalized their dissatisfaction with the decision, as well as the casting of two actors who are not German. It’s a valid complaint: Alone in Berlin never earns the level of drama and universality I can only assume was the reason behind telling this story in English.

It’s no surprise that Brühl, an actual German, is the most interesting component. He plays his inspector role as a tactile and passionate man attempting to find the citizen responsible for the cards. Given that this is a story about defiance, it’s troubling to see the film put itself in a position to be dominated by Brühl; we’re almost rooting for him to catch the “good guys” because he’s so much more watchable.

Brühl, like the rest of this picture, is not immune to Perez’s total lack of control as a filmmaker. There’s a ridiculous beating at the hands of a Nazi that is so over-the-top as to be funny. Perez may have had good intentions in retelling this story, but those reasons don’t matter if he can’t offer a unique vision for a story, for a people, and for a city that matters.

Alone in Berlin premiered at the 2016 Berlin International Film Festival and opens on January 13.