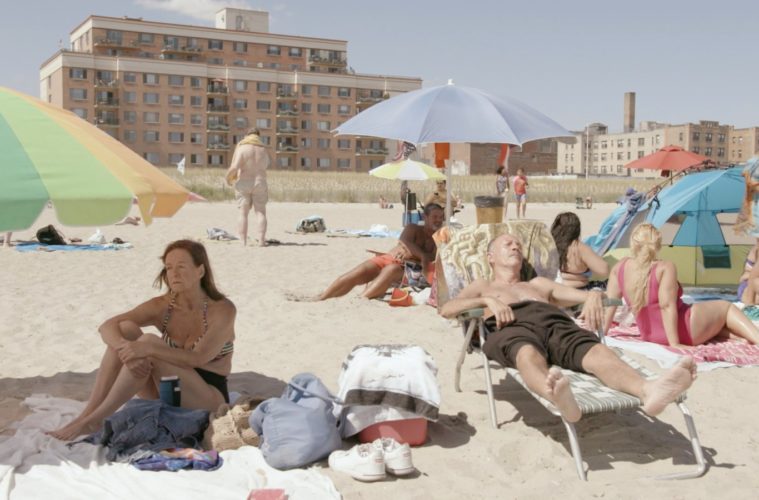 BAMcinemaFest Review: ‘The Hottest August’ is an Expressive, Expansive Portrait of Summer in NYC

Where better than New York City to make a structuralist film? Cities are iterative, their street grids diagrams of theme and variation, and New York most of all—with its streets and avenues named for numbers and letters and states and cities and presidents and Revolutionary War generals spanning an archipelago, intersecting at a million little data points at which to measure class, race, culture, history, architecture and infrastructure. And time, too—from this human density emerge daily and seasonal rituals, a set of biorhythms, reliable as the earth’s, against which to mark gradual shifts and momentary fashions. Summer is for lounging on fire escapes, always, and, today, for Mister Softee. Yesterday it was shaved ice. Tomorrow, who knows?

In The Hottest August, Brett Story, the cultural geographer who made The Prison in Twelve Landscapes, attempts something a little like Akerman’s News from Home, schlepping a camera across NYC to take expressive samplings of people and places at the sweatiest time of the year, and pairing her vignettes with essayistic voiceover musings. Within that superstructure is an echo of the more anthropological conceit of Rouch and Morin’s Chronicle of a Summer. In that film, shot in the summer of 1960, the filmmakers asked a cross-section of Parisians: Are you happy? Here, the casual voice coming from behind the camera frequently inquires, Are you worried about the future? And the responses—offered up two years ago now, a time that already seems subtly different from our own, when the hell was fresher, its ground softer and outlines fuzzier—evoke angst over economic opportunity, racial tension, and, most of all, climate change. Story chose to film in August, the voiceover says, because the summer sticky season is the only time of year that feels timeless anymore. “Fall” and “spring” are just memories now to us New Yorkers, but maybe in August, the climate death spiral will just look like Dog Day Afternoon. For the tensile strength of its concept and execution, and for the humanity unearthed in its urban research excursions, The Hottest August is a worthy inheritor to the nonfiction tradition of News from Home and Chronicle of a Summer—even as Story’s film makes a very troubling, and very of-the-moment, case against the continued viability of any kind of tradition at all.

Shooting almost every day of August 2017, Story and a skeleton crew crisscrossed New York in her 2001 Toyota Echo, keeping a full calendar of events, interviews, locations and spontaneous encounters. They go everywhere from the Jazz Age Lawn Party on Governor’s Island to Bronx Housing Court to the Wrecking Club to a training in deescalation techniques where everyone wears a name-and-pronoun-tag; they meet sunbathers tanned to the color of basketball, struggling single mothers, steelworkers, finance hipsters.

Story mostly avoids hot-time, summer-in-the-city cliches—no children frolicking in open fire hydrants, say—or maybe what she films are cliches, but new ones: Black teenagers fishing where the city meets the ocean; a dog run full of placid, panting puppers; handball courts, beach aerobics, a beer-league softball game that threatens to dissolve into a brawl (while one of the player’s wives or girlfriends texts through it in the bleachers). The locations, a mix of iconic and anonymous, will test your New York eye, from the dioramas at the American Museum of Natural History—nature embalmed—to the badly capped landfill at Dead Horse Bay, where ancient garbage seeps out into the sea, to hyperlocal playgrounds, parks, apartments, and sidewalks. Water is everywhere in the film, which devotes much of its screentime to places hit hard by Hurricane Sandy, like Staten Island, Jamaica Bay—where ospreys nest and the roaring planes take off from JFK—and in particular the Rockaways, where two recent college graduates take time out from a sandcastle-building competition to reflect on their mediocre employment prospects, and the reality that “Our kids might not live out their full lives.”

Throughout the film, Story and editor Nels Bangerter interweave scenes from the August 21 total eclipse, at once invoking eternal cycles and encroaching darkness; other time-capsule events from the summer of 2017 seep in through muted TVs playing CNN in laundromats or restaurants: Hurricane Harvey, white supremacists in Charlottesville. The voiceover, read by actor Clare Coulter and narrated from an indeterminate point in an indeterminate future, interweaves Story’s own texts with writings on climate and capitalism, the gold rush and the coming crash, by Marx, Annie Dillard and Zadie Smith (“The most melancholy of all the euphemisms: the new normal”).

Another potential antecedent for The Hottest August is Jules Dassin’s neorealist noir novelty The Naked City, which casts its dragnet far and wide across sweltering Gotham. New York can goad filmmakers into a panoramic state of mind; in The Hottest August—which will remind you just how many Republicans there are in New York City, more than in many red states—politics are filtered through types. Interviewees—their appearances, their attitudes—are apertures through which to view whole tribes, whether that’s the techie in a hipster-chic startup space advocating for “robot communism”; the middle-aged black women sitting out under a streetlamp glow, complaining that new residents of their gentrifying neighborhood stay inside or don’t know anyone; the ex-cop in Giants gear rambling about welfare babies in a Staten Island Irish bar; or the impulsively tattooed skate saying “kill ‘em all” in between check-in phone calls from mom. As everyone contemplates a decaying country and a dying earth, powerlessness is a recurrent theme, but refracted through different prisms of privilege: a bitter What can I do? or an entrepreneurial I’m just going to do what I need to do or a shrugging What can you do?

Story spends some time with the artist Ayodamola Okunseinde, who sometimes walks around Brooklyn in a DIY Afro-futurist spacesuit as “The Astronaut,” a project, he says, that’s designed to encourage people of color to think about the future—normally the domain of those with security in the present built on power in the past. He tells a woman he meets on the street that he’s participating in a “documentary about the future.” It’s a tribute to The Hottest August’s achievement to say that that’s exactly one-third of the story.

The Hottest August played at BAMCinemaFest and opens on November 15.