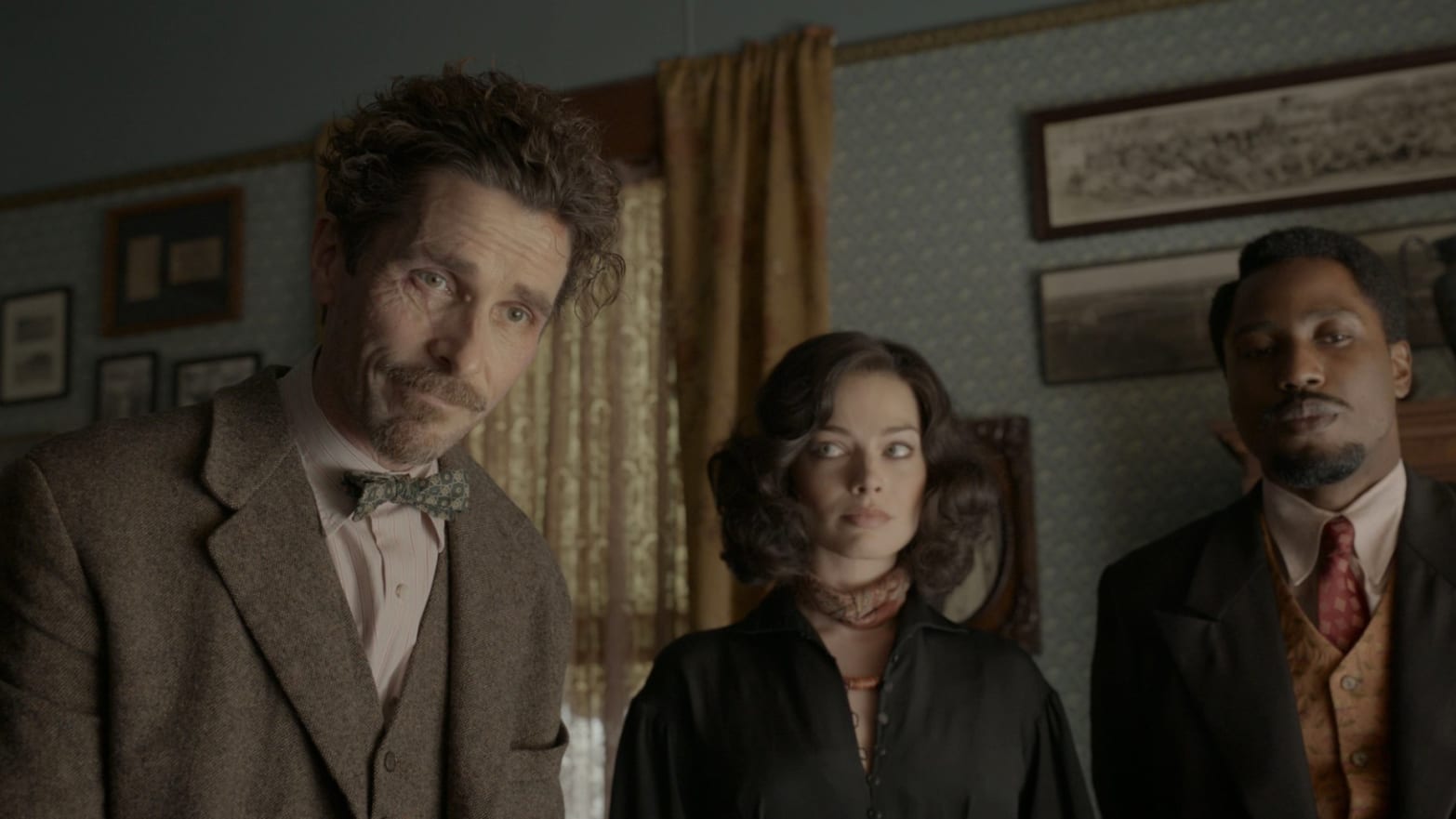 All throughout Amsterdam you can hear the gears clunking and grinding and screeching. Could it be the rust? It’s been seven years since David O. Russell made a movie—even longer since he made one that sang with the kind of drugged-out, balletic energy that satisfies his crowded, star-studded ensembles—and you can tell. Something just feels off. He’s back directing an overstuffed, incongruous, stranger-than-fiction yarn attempting to dramatize (or satirize?) one of the most bizarre plots in American history. That you can’t always tell—the movie arbitrarily pivots from serious conspiracy to buddy comedy throug every scene—only highlights the chaotic tonal friction at its core. There’s enough heat to call this a lukewarm mess.

That’s a shame, and maybe also predictable considering the number of actors Russell has at his disposal yet again. Christian Bale, Margot Robbie, and John David Washington represent this movie’s troubled triumvirate, but he’s found room for Rami Malek, Anya Taylor-Joy, Robert De Niro, and smaller roles for Chris Rock, Zoe Saldana, Taylor Swift. The list goes on, much like the script, which Russell wrote (and developed with Bale) for six years, resulting in the actor stashing—and later finding—old drafts of it in his cabinets. Those details might be amusing if Amsterdam didn’t spend its 134-minute runtime introducing all its characters, drowning them in explication, and letting their conversations fizzle.

Until it becomes unnecessarily over-explained, the plot—loosely based on a real political coup attempt in the 1930s—is intriguing enough. Burt Berendsen (Bale) works as an experimental doctor in New York City, patching up World War I veterans like himself with glass eyeballs and easing their pain through unapproved morphine cocktails. Harold Woodman (Washington)—a lawyer, former soldier, and longtime friend—takes on Burt’s patients as clients, forming an unlikely duo and striking aesthetic mismatch. Seemingly under contractual duty to transform his skin, hair, and posture with each role, Bale applies a frizzled bedhead, corset, and wobbly gait, while Washington shines in dapper legal attire—enough to make this odd couple look suspicious when a fascist-inspired thug (Timothy Olyphant) commits murder in front of them and flees the scene.

Before that calamitous (and hilariously abrupt) event frames Burt and Harold as killers and sends them on a conspiratorial journey, they’re summoned to observe the body of their former military general Bill Mankins (Ed Begley Jr.). Though records indicate a death of natural causes, his daughter (Swift) suspects foul play and asks that they take an autopsy before he’s lowered into the ground. Soon, Burt discovers Mankins’ body filled with poison (Russell gives a slight nod to his intestinal imagery in Three Kings), privileged information that compromises his daughter (Swifties, cover your eyes), and sends the duo on a marathon around the city to clear their names and discover the larger motivations behind their old general’s untimely exit.

How did Burt and Harold end up friends in the first place? Russell quickly halts the momentum and backtracks to the war. All that’s missing is a record scratch. In voiceover Bale remembers taking over a troop of Black American soldiers under Mankins, sustaining shrapnel wounds, and eventually entering the care of Valerie Voze (Robbie), a Dadaist disguised as a French nurse inside an Amsterdam infirmary. Over time they bond as a trio, living post-war life together in Belgium—they heal scars, throw parties, sing, and Burt becomes a third wheel to Harold and Valerie’s latent romance. If Washington and Robbie lack any real chemistry, their affection is mostly a device to disrupt the group dynamic, soon sending Burt (and later Harold) home to start his private practice and restart life with his unenthusiastic wife (Andrea Riseborough).

Without giving away much more plot, Valerie eventually reconnects with her old friends in New York and becomes submerged into their criminal situation. Along the way Russell sprinkles a handful of other peculiar couplings—two police officers (Mattias Schoenaerts and Alessandro Nivola), two undercover spies posing as bird enthusiasts (Michael Shannon and Mike Myers), and a husband and wife with nefarious connections and conspicuous behavior (Malek and Taylor-Joy). There are large political forces at play, talk about a “Great Nation Society,” and the dark specter of another World War. But Russell doesn’t trust his audience to grasp it all. He tells, retells, and then has Burt recapitulate everything in voiceover, just in case you missed it.

Adam McKay moderated a Q&A after a screening of Amsterdam two weeks ago, and it’s impossible not to see his more recent stylistic fingerprints—the wordy first-person narration, the random freeze frames introducing characters, the introductory and eye-rolling disclaimer that “a lot of this actually happened”—influencing Russell and smudging up the frame. It might have all been clever a decade ago (Russell even used a variation of it in American Hustle), but here it feels exhausting, an artificial add-on indicative of his movie’s overcooked attempts at humor. In one sequence that lasts too long, Taylor-Joy and Robbie get into a pedantic argument that makes Malek, Bale, and Washington feel like they belong in an entirely different movie. The confusing interaction quickly evaporates the room’s oxygen.

Russell fills the cracks of his movie with similar attempts at gags— borrowing unsuccessfully from Wes Anderson—via comic caricatures, like the contradictory detectives that keep knocking on Burt’s door. The pitter-patter banter grinds against Emmanuel Lubezki’s fluid, mahogany-glazed lens beautifully capturing every entrance and cameo in poignant portraiture. You can see what Russell’s trying to do. It’s just that it feels more suited for the Coen Brothers, long-time collaborators with well-established cinematographers and masters of the needle-threading necessary to stitch this story’s absurdity with its darker, more sadistic forces.

Indeed it’s a strange—if not entirely frustrating—thing to watch a movie strain itself for your enjoyment. Russell has been nominated for four Oscars, but he’s too didactic here—the parallels to the ways this country elected its last president are sledge-hammer obvious—to conjure any of the former thrills or surprises of his personal canon. Like too many movies released over the last few years, Amsterdam drowns in generic, anti-hate rhetoric and tributes to love’s healing power. It’s the kind of spelled-out sappiness that feels at odds with previous directorial decisions (not to mention the on and off-set abuse allegations against him) that let his actors generate tension and emotion within his messy, restless, eccentric house style.

In Amsterdam that’s mostly gone. By the time De Niro shows up as political leader General Gil Dillenbeck (based on the real Smedley Butler), the urgency of this witch hunt has already been smothered into a bland dilemma. It’s par for the course. Everything looks nice and polished as the world heads for chaos.