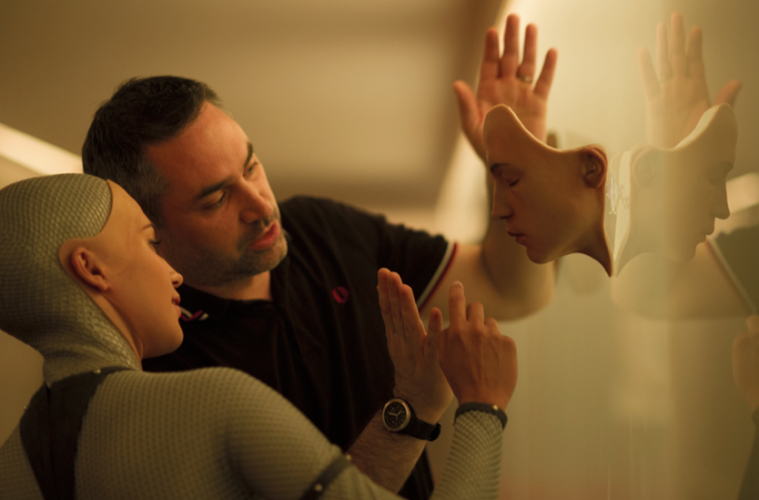 Genre film fans are likely familiar with writer Alex Garland‘s output over the last decade and a half. He made his name with a splash when his novel was adapted into the backpacking adventure thriller The Beach in 2000 and struck again with screenplay for 28 Days Later which some credit as the fire that helped reignite the zombie resurgence we are experiencing now. Whether it is films since then like Never Let Me Go, or personal favorite Dredd, Garland’s writing has been behind some of the most interesting genre cinema around and now, with his directorial debutEx Machina going wide in theaters this weekend, he is finally announcing that he can be more than just a strong writer.

If it was up to Garland, though, he’d share equal credit with his cast and crew. Garland rejects the deification of directors in modern cinema and he’s expressed as much in numerous interviews and even during the Q&A of the film after the U.S. premiere at SXSW in March. The film follows the brilliant if juvenile billionaire programmer Nathan (Oscar Isaac) who invites one of his most promising employees, Caleb (Domhnall Gleeson), to his secluded home/compound. There, Nathan hopes that Caleb will perform the Turing test—a test given to a computer in a scenario where the person interacting with it has to be convinced it is talking to a human—on Ava (Alicia Vikander), who is an android. The catch here is that Ava is very obviously an android but Nathan is convinced that his creation is brilliant enough to convince Caleb that she has a genuine mind of her own.

What follows is a twisted mind-game with three players involved where they continually try to best each other. The film, as I mentioned in my review, revolving around a robot “isn’t the normal place to find a rich and thoughtful exploration of patriarchal society, gender identity, seclusion and nature versus nurture. Yet Garland and his ensemble have managed to deliver all of this within the realm of a resonant science-fiction narrative that is as brutal and honest in its observations as it is entertaining.”

So it was with obvious excitement that I got to spend some time with Garland on the phone to talk about his film, how he named it, some oddities that I noticed in the way that Ava appears on screen, and whether collaboration slows down a production which he had an interesting perspective on. Speaking to Garland’s independent spirit, he’s the one who actually called me directly when the press day for Ex Machina ran late as he was on his way to a meeting with Warner Brothers. Check out the entire conversation below.

The Film Stage: I saw the film back at the Paramount at SXSW. There was a great reaction there.

Alex Garland: That was a really good night. We had no idea how that film was going to go. There was quite a few people attached to the film that were there that hadn’t really seen in on the big screen. They came to Austin specifically — three of the producers, the guy that shot it, and even some other people. So it was a really good time.

That’s great to hear. It was definitely a highlight out of SXSW for me. Let’s start with the basics. I’ve read quite a few interviews with you about this film but I’ve yet to really see anyone ask you about the title itself. Ex Machina. Taken from Deus Ex Machina, so all it means is The Machine?

Yes, precisely. If you take the prefix, the Deus Ex, it implies the god out of the machine.

I think a title is incredibly important.

Did you get any pushback on the title?

We did indeed. There were some people that felt the title was a bad idea. It’s not well known. People don’t know how to pronounce it. I really liked this title but I don’t have the power to fight for it that hard. A couple of people involved in the film, with Scott Rudin in particular and one of the financiers, just decided that it was the right thing to do and to support the title. The evidence that was used that finally managed to convince people to go with the title was the movie Prometheus. They figured if they could make Prometheus work, people would buy into Ex Machina. But in truth, if I’m being totally candid, the fact is that this is a really low-budget film and probably they just didn’t care that much.

[Laughs] You’ve mentioned that in several interviews. If you have a low budget, people don’t mess with you as much.

It’s true. And it is a fact that you learn after a while of working on films. You start to think that way unconsciously and you write with that awareness in mind. This was a tricky movie in all sorts of different ways. It’s got difficult subject matter. It’s quite adult in some of the themes and images. It has long sections of dialogue and also, actually, long periods of silence — just music and images and stuff. Creative freedom was vital. If we had started compromising it we would have been in big trouble. The only way to execute it was to go for it 100 percent.

One thing I noticed is that Ava doesn’t blink a whole lot in the film. You’ve mentioned that Alicia Vikander’s mindset was to make her movements more perfect than a normal human. Or, rather, ideal at all times. She sits completely straight, never slouches. She is standing perfectly. These are things that without going into the uncanny valley bring forth that emotion and reaction from audiences that she is otherworldly. Alien. Machine. But I was curious about the arm length of her character, Ava. I know that you’ve shot everything on screen and then converted it digitally on the back end. For whatever reason, her arms look abnormally long.

It’s quite interesting you say that. Do you know why that is? They’re not lengthened in any way at all. That is just simply Alicia’s exact silhouette. What happens is that when you separate the hands and you have the skeletal structure visible and not the flesh that creates the contours, your sense of how the body is proportioned is very strange. If you just took a normal person and you revealed their bones and went the length of their arms and stopped it at the wrist, you’d have the same effect. It’s only that we’re clad in muscle and skin that it changes the way that looks.

Wow. That is interesting. And I’m sure things like that came up in the edit bay or wherever you were getting dailies of the finished effects and wondering why it looked weird.

Yeah. There were various surprises that would appear like that. The thing that we noticed was not so much that the arms looked long but that the hands looked big. But having a sort of strangeness is an asset for Ava. It’s good that she doesn’t feel just like us because she’s not just like us.

Exactly. You’ve spoken up against the deification of directors in cinema today and are pushing the mentality that making a film is a collaboration. There are a ton of people responsible for what ends up working or not working on the screen, and it’s rarely just the director. But at the same time you basically had a budget where you could do three or four takes per scene and then had to move on. Collaboration is this wonderful thing; it’s brilliant and invigorating but it also pumps the brakes. Do you think it slows things down?

No, I don’t think so. It depends who is doing it. We were a really tight cast and crew. We all got along. There was a lot of laughter. And we were also all in agreement on what we were trying to do. The stuff that can go wrong on films is when you have different groups, who may both be powerful groups, who are trying to make different films. That happens on a lot of movies, it really does. It can get very splintered very quickly and you can have lots of different agendas and lots of politics. And one thing that ends up happening, from my point of view, is that a lot of your time and creativity energy is not spent on the film making but is instead spent on the politics. If everyone is in sync and they get along making the same movie, you are collaborating, but you can work really quickly and efficiently. It’s a pleasure when that happens. It’s really nice. But just to let you know, I’ve arrived so I have time for one more question.

One thing I wanted to ask about before you go is that Nathan and Caleb both quote texts at various points. Nathan paraphrases and it catches Caleb’s attention as incorrect. “You’re not saying it correctly.”

It shows the dynamics between the two of them very specifically. One is free and flowing and the other is very rigid and structured.

Where did that come from and was that in the script or did it come from collaboration?

That was in the script. There was a bunch of games being played, but if I’m saying it was in the script, I wouldn’t want that to undermine the creative and collaborative aspect. Really, what happens is that I see myself as a writer. So I write a script and then you find the people you want to work with and all these people elevate it. They make it better than you were hoping or planning. That includes the acting. They continually add nuance and find meaning in lines you never expected or never knew was there. So that sort of stuff might have been in the script but it was not as fully developed as when you put it in the actor’s hands. I often feel that one of the strongest bonds in film is between writers and actors. They’re the two groups that understand how to get into characters the most. They really internalize the characters. The writers because they wrote them and the actors because they have to perform them. So often everyone is speaking the same language in some way.

Well, I will let you go and wish you good luck in the meeting with Warner Brothers.

[Laughs] Oh, it’s not very glamorous, just so you know. [Laughs] I’m not about to be offered Batman or anything like that.

It’s more of a general, hand shaking kind of thing. But listen, thanks man and take it easy.

Ex Machina is now in limited release and expands wide on Friday, April 24th. For more from Garland, watch a 40-minute interview below: