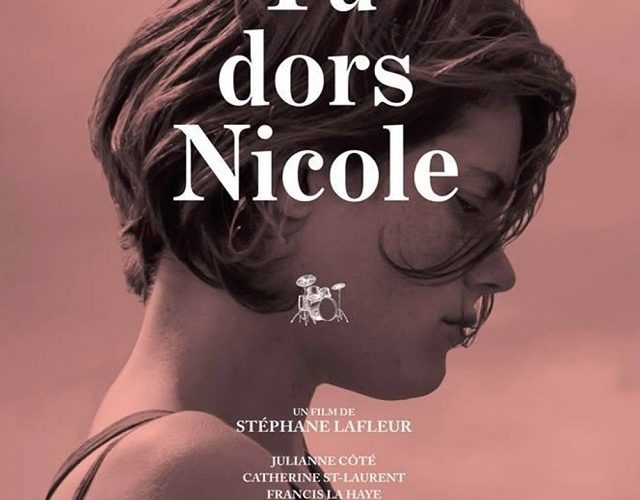 It’s perhaps possible that the whimsical nature of Tu dors Nicole would be rather unbearable in the form of an American studio comedy, the kind that fills the alt-programming summer slate of Fox Searchlight. On paper, the film suggests something rather slight: Nicole spends her post-college summer at her parents’ house while they fly away on vacation. She works at a local donation store, fights with her punk-rock brother, and spends afternoons wasting away with her best friend. But under the direction of Stéphane Lafleur, this Québécois comedy takes on an air of wondrous restlessness in its minor ambitions.

Shot on 35mm black and white, Lafleur’s images contain an arid heat while the soundtrack prances upon fanciful notes. Nicole, played by a rather darling Julianne Côté, dreams of her adventure in her mundane suburban life, biking around the sunny town with her friend Veronique (Catherine St-Laurent). Both are startled by the appearance of Nicole’s brother, who moves his band in the living room, pounding away their monotonous punk rock — an equal combination of intolerable and amusing. But most troubling for Nicole is the new drummer, who thrills the romantic interest of both and Veronique. The look and central relationship of Tu dors Nicole might recall Frances Ha, but Lafleur’s formal control is something very different from Noah Baumbach’s more off-the-cuff shot structure. Lafleur shoots sequences mostly in long takes with a bit of open framing; characters may stay central to the composition, but we are given the ability to observe the rest of the space each character inhabits and notice subtle clues concerning their background. (Two examples: the child photos of Nicole and her brother, and the way beer cans seemed to be as symmetrically organized as if this were an Ozu movie.) The coming-of-age genre that Lafleur implies here doesn’t necessarily call for this formalist approach, but, like in the work of Hou Hsiao-Hsien, it allows the film to tell more story than awkwardly shoving exposition into the dialogue would permit.

Combined with the luscious photography, Tu Dors Nicole has a certain dream-like state (the title translates to You’re Sleeping Nicole), and some of the interludes certainly take on a sense of magical realism. A possibly threatening nighttime encounter turns out to be a father driving his infant around to whale sounds, and no character will match the hilarious charm of the ten-year-old Martin (Godefroy Reding), whose crush on Nicole is exacerbated by having the insertion of a dubbed voice of a suave 40-year-old. There isn’t so much of a plot (beyond a possible trip to Iceland that seems doomed from its inception) as much as a series of collected vignettes, all piling onto Nicole’s psyche as her pleasantly dull life becomes impossible to handle. Côté’s internal psyche is captured by her rather monotonous face in often the most subtle of details — the way she seems to curl her lip through a lie or shift her eyes builds the tenuous relationships between her, Veronique, and the band members.

Tu dors Nicole may seem slight in terms of its conception, but while other Québécois filmmakers wish to make Important and Loud movies, it’s comforting to know there’s someone out there who understands — to reference a film that was certainly a key influence on this one — the sound of silence.

Tu dors Nicole screened at AFI Fest and is seeking U.S. distribution. See the trailer above.