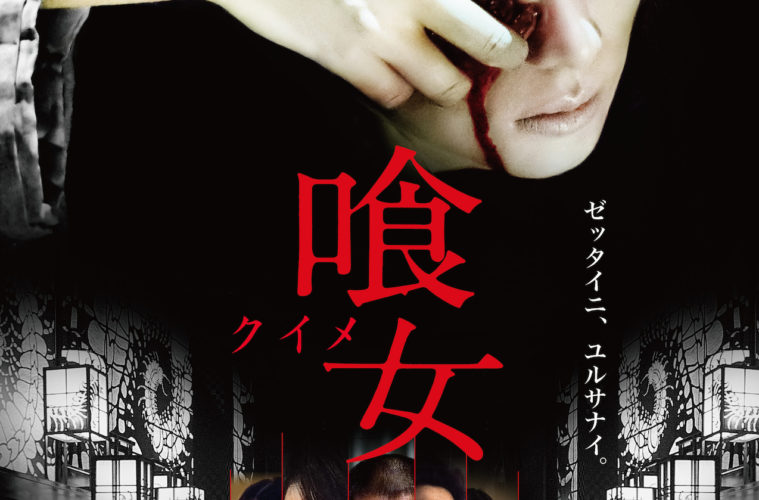 Perhaps in another version of Takashi Miike’s latest film (and his first to be receiving a proper US distribution deal since 2011’s 3D extravaganza Hari-Kiri), a story about the blending between theater and reality would not require a woman to gnaw on her own aborted fetus. Then again, that likely wouldn’t be a Takashi Miike film, would it?

Like fellow countryman Kiyoshi Kurosawa, Miike’s production unit works fast, churning out multiple projects in a year. So while US audiences may only know a handful of his works, like Audition and Ichi The Killer, Miike has made over 75 features and TV projects, averaging two to three within a twelve-month span. Miike’s origins in Japan began in “V-Cinema,” essentially a direct-to-video market that has a higher degree of respectability in Japan. His feature films, which he shoots in two or three weeks, continue to have perpetually low budgets — though, given the high degree of gratuitous artistry (read: lots of blood and guts), they rarely give the impression of careless craftsmanship.

Miike often respects the boundaries of what his films must accomplish. In an interview regarding the “very Hollywood” Shield of Straw, Miike explained, “This film is a very commercial film that was within a small market that is Japan. We had to open 300 screens.” Miike, in this way, resembles some of the more workman directors of the old studio system — William A. Wellman, Allan Dwan, Raoul Walsh — and has admitted to simply signing onto projects with attached scripts, stars, and budgets. Claiming he would rather be directing than not working, he calls himself less an auteur than an arranger. This means that finding a coherent style or theme in his films can be somewhat difficult, but certainly all of them have a flair for physical dismemberment, whether making yakuza films or the horror pictures that have gained notoriety here in the United States. Miike’s distribution methods then might seem frustrating to a US audience: most are only meant for Japanese attendees, and their appearances at major festivals like Cannes suggest a higher “art cinema” pedigree. Either way, it can be a strange guessing game of which Miike film will play here; the Kurosawa-influenced samurai throwback 13 Assassins made a relative splash, but Ace Attorney, a blockbuster in its home country, is here considered box office poison for its “untranslatable” comedy.

Over Your Dead Body is part Pirandello and part All About Eve by way of Miike’s usual flair: it involves four characters rehearsing a theatrical adaptation of a historical ghost play. And, as it would happen, one is a man and the other three are women who all seem desperately in love with him. And one is his girlfriend. And he’s having an affair with another. And one might be pregnant but is trying to get the other pregnant. The play — involving a samurai who poisons his wife in order to gain future and glory — reflects the off stage reality as one would expect. Then things get violent in both the play and then, suddenly, reality as well. Miike’s best handling of the material comes from his use of the set for the play, which uses a warehouse environment and desks for the audience. The stage is big enough that his shooting style permits an eschewing of the “audience” and a focus only on the play at hand, blurring the lines between us noticing this fiction and us believing it. The handsomely composed theatrical mise-en-scène is often lusciously saturated in gorgeous blacks, blues, and especially reds. On a side note, however, Miike and his cinematographer Kita Nobuyasu are one of the many directors of his era still struggling with the transition to digital; many of the darker scenes contain a blur that makes likely it was lit in the traditional manner for 35mm cameras, creating a garish blur on screen that takes away from some of the more stunning images. (I am willing to grant that this may have been a DCP issue, however.)

Over Your Dead Body will certainly appeal to Miike’s hardcore fan base, for his technical mastery of blood is on display throughout. I must admit that my interest in this sort of thing only goes so far, though I find the production model he’s developed to be quite fascinating. Luckily, those interested in Miike will not have to wait long for another film — he already has two completed projects ready for next year.

Over Your Dead Body screened at AFI Fest and will be released by Shout! Factory. See the trailer here.