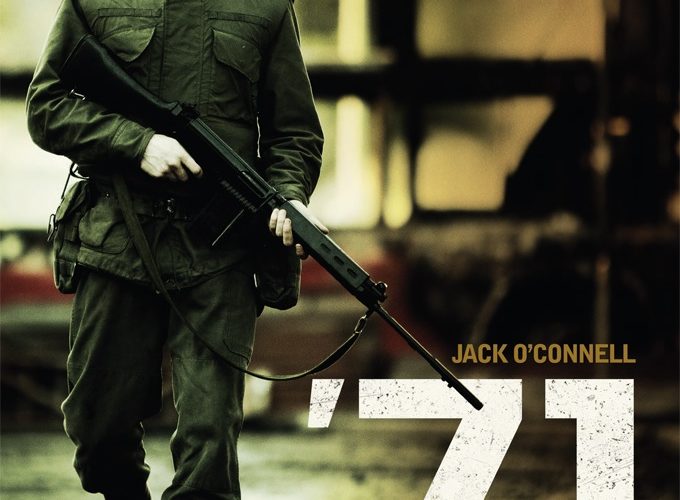 In an AFI Fest post-screening discussion of his new film ’71, director Yann Demange expressed the legitimate concern that certain audiences, specifically those of an American stripe, may not know enough about “The Troubles” to appreciate the film’s historical accuracy. While a good number of Americans can likely draw on enough existing knowledge about their national conflicts (e.g. WWII or Vietnam) to grasp the significance of films depicting such events, comprehension of the Northern Ireland conflict is seemingly surface-deep. Demange was adamant that the political elements on display in ’71 are, in fact, historically accurate.

That’s not to suggest the film is a work of non-fiction, nor a work with particulars that are based on any actual event. Rather, Demange and screenwriter Gregory Burke’s approach is to depict the immediacy of The Troubles through the fictional story of Gary Hook (Jack O’Connell). This is a young, single father and British soldier who is separated from his regiment during an intense, perhaps preventable, and likely common riot shortly after being sent to Belfast, following the conclusion of what appears to be basic training. Once on his own, Hook is forced to navigate the eerily desolate and burned-out streets of Belfast, unsure of who can or should be trusted. An prologue-esque, pre-title-card sequence provides the only exposition we’re really given with respect to our central character before Hook and his fellow young soldiers are shipped to Belfast. From the time Hook finds himself alone in enemy territory, however, ’71 progresses over the course of a single night, its chase-like structure (one that begins in a literal manner, Hook being chased on foot through the streets and alleys of a small neighborhood) allowing Demange and Burke to incorporate select political details only to the extent that they impact Hook and the particular situation at hand. This is of significant importance with regards to the depiction of a small group of British MRF agents led by the always-welcomed screen presence of Sean Harris.

If Demange’s concerns about what international audiences would understand resulted in a conscious (or perhaps subconscious) decision to use these political details sparingly, then his concerns may have been a blessing in disguise. An audience is not drawn-in by any big-picture ideas about the “whys” and the “hows” The Troubles began, or where any of the blame should be placed, but instead through visceral elements of the filmmaking itself. Included here are the immediate connection we develop with O’Connell’s Hook, the strength and demanding physicality of O’Connell’s performance, the desperate atmosphere of the streets of Belfast, and the incorporation of some brilliant shaky-cam work that almost always seems to add to the proceedings. And, perhaps most strikingly, the level of humanity that many characters display during impossible situations. For all of its strengths, ’71 stumbles a bit in its third act with a climactic set piece that feels poorly staged, leading to some confusion as to where certain characters are (or aren’t) placed at critical moments. It’s fortunate that, by this point, we’re so invested that it’s only a minor distraction, but a distraction nonetheless. Some earlier detours into the personal lives of several young IRA members add a narrative layer that muddies things a bit, but these detours do allow for one loose (albeit thematically significant) parallel between two characters.

Although violence, both actual and threatened, permeates almost the entirety of the movie, there are a small handful of moments that are elevated substantially by the shocking and abrupt ways in which they unfold. Demange and director of photography Tat Radcliffe (who also shot 2014’s Pride) do not shy away from showing the brutality of these moments, forcing us to confront not only broad notions about the devastation of war, but also the way these moments intimately impact Hook. The emotional resonance of these moments will make ’71 tough to shake.

’71 screened at AFI Fest and will be released next year by Roadside Attractions. See the trailer here.