‘A Raisin in the Sun’: Sidney Poitier Faces the Strains of a Segregated World 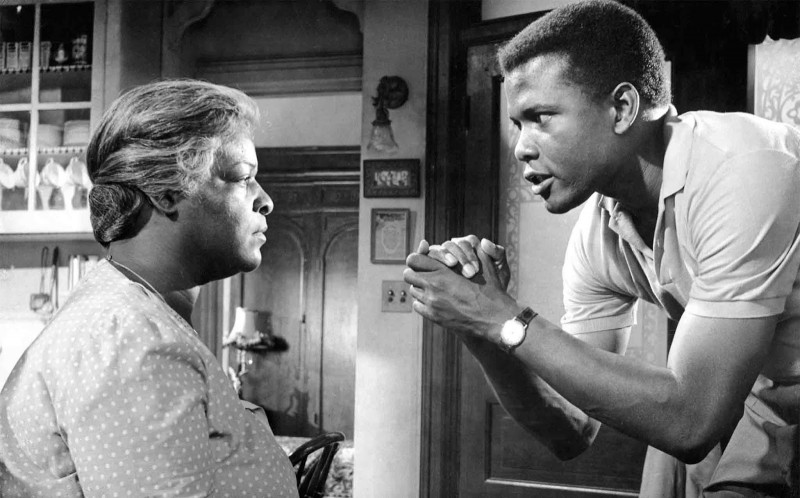 Lorraine Hansberry is sometimes lost in the shuffle of famous playwrights, which is quite a shame considering she was the first African American writer to have work produced on Broadway. While only a few of her plays made it to the stage due to her young and untimely death, Hansberry utilized her writing to help the Civil Rights artistic movement, specifically with her hit Broadway show A Raisin in the Sun. Starring Ruby Dee, Sidney Poitier, Diana Sands (all three of whom reprised their roles on screen), among others, the play centers on an African American family struggling with being swallowed by racism in their everyday lives. The show became so popular that Columbia Pictures adapted it for the screen with Hansberry writing the script. Despite the issues that can often come when adapting from stage to screen, Hansberry and company manage to create a space for their actors to explore their trapped spaces both physically and emotionally.

Critics of the time complained that Daniel Petrie’s film is less effective because the majority of the scenes take place within the Younger’s apartment; however, it is that very condition which makes the film work. Tensions rise as the Youngers crowd into their tiny New York City apartment. It is crowded and stuffy, with people having to make their beds on the couch. Morning routines become too stressful if someone doesn’t stick to their strict schedule which can lead to a traffic jam at the bathroom. As these tensions rise physically, characters start to take their anger out on each other with stirring emotion. With the strains of a segregated world pressuring from the outside, there is no space on the inside of the apartment to appropriately let off steam without it being directed at someone else. Beneatha (Sands) even tries to keep her friends as far away from the apartment as possible, claiming that it and her family suffer from “acute ghettoitis.”

Walter Lee Younger (Poitier) is the most emotional of them all. His outbursts are frequent and spray on anyone in the general vicinity. In the larger Sidney Poitier character-universe, Walter becomes an amalgamation of Poitier’s roles up until that point. Whether it is being a doctor in No Way Out who must calmly fight off accusations that he purposely killed a white patient or having to continually protect a naive dock worker in Edge of the City, it makes sense that Poitier’s characters would bring that stress home with them. In 1961, for audiences who were willing to be receptive, white spectators were finally seeing what it was like inside the confines of black homes. Where the social problem film of the 1950s had shown whites that blacks were not all that different from them, studios were now forcing moviegoers to exit their escapist narratives onscreen and wrestle with how their isolation tactics were affecting African Americans.

Hansberry may have never received her proper due because of her premature death, but it is apparent that her work lives on. A Raisin in the Sun gave audiences a backstage pass into the inner workings of the African American family, not to mention that it continued to spur Poitier’s career into the national spotlight. The new Criterion Collection release has an interview with Hansberry from 1961 and other essential bonus material that makes it the perfect time to revisit this vital work of American filmmaking.

A Raisin in the Sun is now available on The Criterion Collection.