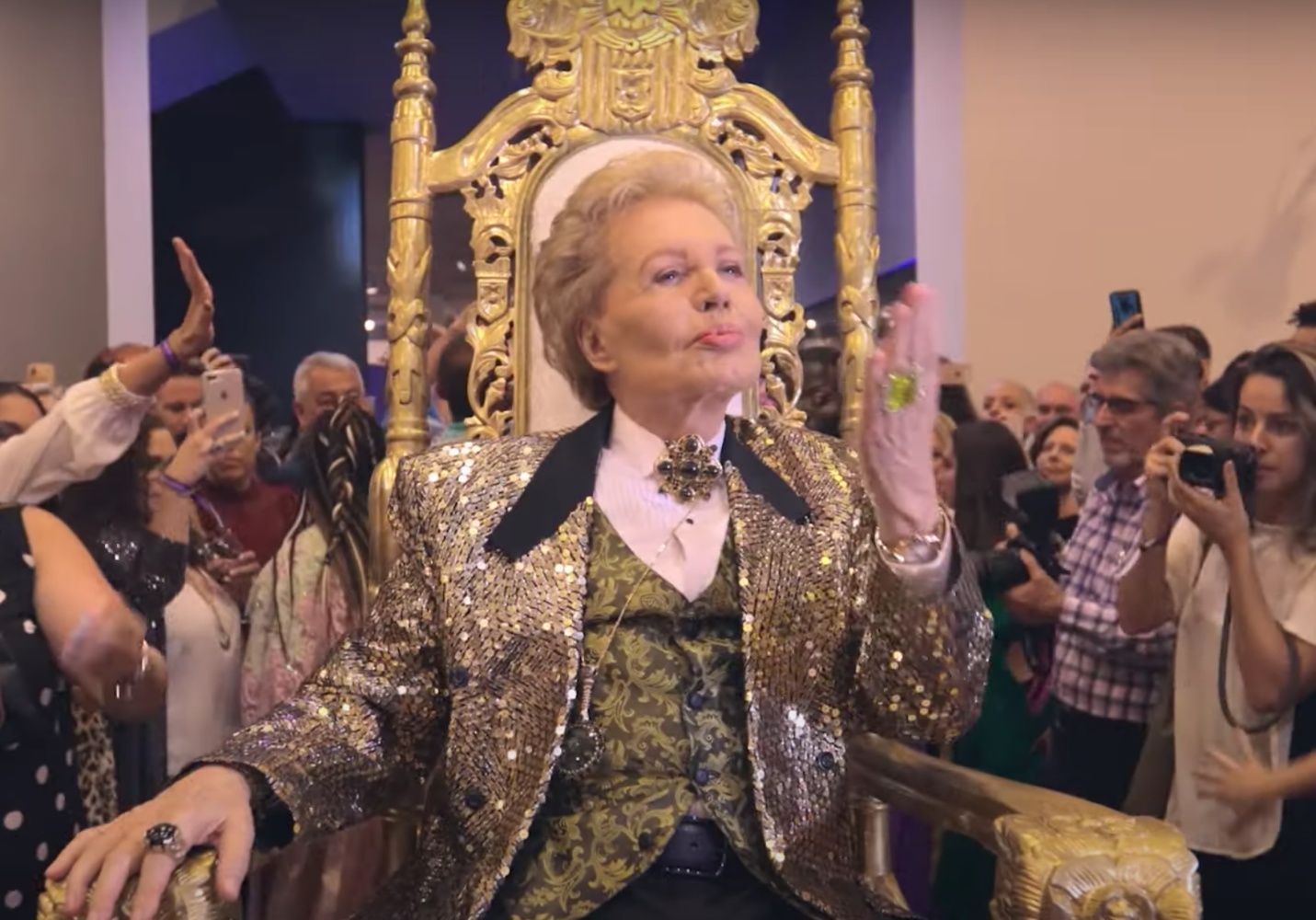 “Through Walter Mercado’s existence we have greater acceptance for people around us.” – Lin-Manuel Miranda

Although you’re gone from the physical realm where once we co-existed, I’m writing to thank you for leaving us behind so much of your knowledge, beauty, and grace in Mucho Mucho Amor: The Legend of Walter Mercado, and for allowing directors Cristina Costantini and Kareem Tabsch to distill your message of love and acceptance into a documentary that’s so entertaining, intimate, and enlightening.

I grew up one block away from the Church of Los Dolores in Tegucigalpa, Honduras, a baroque structure completed in the 18th century. As a little boy, I often accompanied my great-grandmother to mass, and remember being fascinated by the opulence. Saints with pale faces and broken-hearted expressions who were always decked in extravagant robes and capes, with crystal and gold-leaf finishes. I was always drawn to the central altar, a massive golden wall, which seemed to reach for the heavens. For the elders, it was an invitation to adore the holy, for me the always lit candles made it look like an oversized birthday cake, and I was told on several occasions not to sing “Happy Birthday” when I saw it.

Even as a child I knew the secret desire in my heart would keep me from being fully welcomed by what later I realized was called the Catholic Church. My queerness would always separate me from an institution that deemed my “otherness” unworthy of entering the realm of salvation.

You, Walter, were the first real-life human being I saw decked in the same opulent capes as those saints I loved so much, and whose embrace I craved. The difference was that you spoke to me, and talked about the potential for love and success I had as part of yet another group in which I was classified as an Aries.

Although I was reminded by society and my peers that you were someone more worthy of mock than admiration, because of your androgyny and grandma hairdo, I never missed a chance to listen to what you had to say to me. Of course, I had to pretend that I took your message with a grain of salt, not because of its worth but because you were the messenger.

It broke my heart to hear you talk in the documentary about your knowledge of the polarizing opinions you caused. It shattered me to see you play along with the joke, as Latino journalists made homophobic jokes about you to your face, and you swallowed the pain they might have caused and instead used your sense of humor to deflect and protect yourself.

I realized watching the film that in many ways you were protecting children like me, who used our bath towels and sheets as makeshift capes to wish love and hope on those around us, when we played in the privacy of our rooms.

I didn’t know much, or anything actually, about your upbringing, and was delighted to learn about your extensive training in music, dance, and the arts. Not to mention how you were able to infiltrate the capitalistic television industry to create a space for spirituality and joy. Thanks to Costantini and Tabsch, I got to see the way in which you combined Spanish flamenco, tap dancing, music, and a perceptive sense of how to move in space while being captured by a camera to break grounds in a way that you were able to satisfy both those who wanted to see a Liberace-style showman, and also those of us who were receiving your message at a different level.

It wasn’t until I saw the way in which the filmmakers expertly used tarot cards to divide the story of your life into pithy chapters, that I realized you didn’t only contribute to my sense of how mass media can be altered and changed to deliver a message of hope amongst the chaos (now I understand why your segment came at the end of the sensationalist Primer Impacto, we had to endure ghastly crimes and stories of loss, to understand that all of this could be counteracted by love), but Walter, I gasped when I realized that unconsciously you also helped form my spiritual identity.

As a queer Latino, I had to make do with the scraps I got from each of the spiritual branches that rejected homosexuality but also had underlying messages of acceptance and love. As an adult I have often expressed my spiritual beliefs as syncretism. I take what serves me from each religion and spiritual tool I’ve studied, to create a philosophy of love. People don’t understand it; even those who are close to me ask how I can find any worth in the teachings of Jesus when they were used to build Catholicism, or how I dare make any sense of mystical Judaism when I’m not a Jew––or worst yet, how as a Latino presumably raised by Catholics (I was actually raised atheist) do I play with the demonic tools of tarot and astrology.

I now believe, Walter, that you gave me the tools and the confidence to create my own persona, as long as this character I made for myself was keen on delivering a message of hope. I realize now that I’m not hiding behind what some deem to be extravagant methods, merely, just like you and your gorgeous capes, I’m reclaiming my spot under the sun, because I too have a right to shine, and to be listened.

In the film, there is a clip of you in Cristina Saralegui’s talkshow where she establishes she’s going to question you about some of the most controversial topics in your life. You mockingly said “all of my life then,” and gave her one of your sly smiles, but when she asked you why you were comfortable combining elements of so many different religions, your answer came from another dimension. The hairs on my arms raised when you told her it was because “no one had a monopoly on God.”

Although I never saw that interview when it aired, I am so grateful now to the directors of the film for preserving and highlighting this, because for the first time I heard someone else put into words what I know deep in my heart to be true.

I couldn’t help but be mournful near the end of the film. I knew you were gone; I was shocked last year when I found out you had died. You were one of those people I assumed would live forever. The shock I felt then was similar to what I felt when Mexican superstar Juan Gabriel passed away a few years before. The two of you were the only Latino men I knew, even if only from TV, who rejected all the machismo in Latin America culture, and not only made a life for yourselves in the world, but even found success among the same people who feared you because of your otherness.

Seeing you in the documentary near the end of your life, I cherished the peace that emanated from within you. It made you appear as someone with very little regrets, as someone who had come to terms with the multitudes you contained. I’m sure you weren’t perfect––none of us are. I’m sure you hurt people––all of us have. But you recognized your humanity, flaws, and everything, to create a path that others could follow.

I wasn’t surprised in the least to learn that you had “come back from the dead,” after surviving a heart attack in 2011. If nothing else, I am grateful that you were sent back to allow Costantini and Tabsch to tell your story. To capture your goodness, fabulousness, and unique point of view.

This documentary will now be a tool accessible to anyone who needs to hear your philosophy, who needs to be inspired by your sense of style (the sequence in which the camera glides among your capes is almost out of a dream). I can’t help but smile knowing that for little queer boys and girls, in Latin America and all over the world, there is now a document to remind them that not only are they welcomed by this energy of love that created you and them, but that in fact, they are essential.

So dear Walter, wherever you are when you read this, I also send you mucho, mucho, amor.

Mucho Mucho Amor: The Legend of Walter Mercado is now on Netflix.