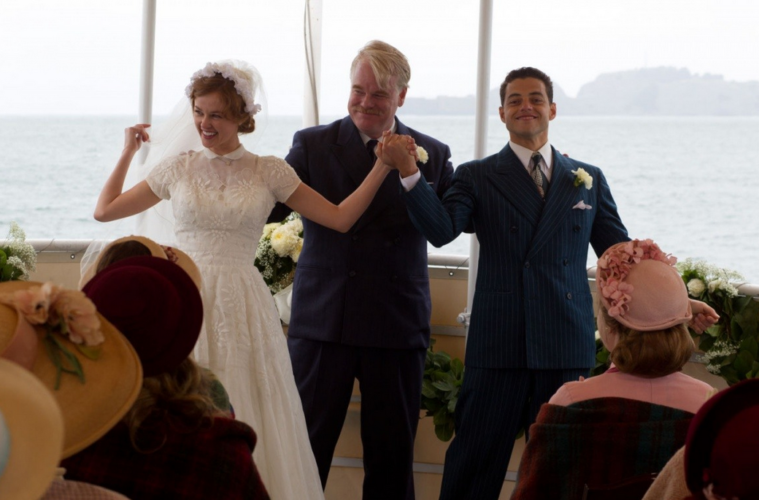 Update: Photos removed at the request of The Weinstein Company.

We’ve got a Venice premiere confirmed, along with a 137-minute runtime and even impressions from the first secret screening, but in just about a month Paul Thomas Anderson‘s The Master will actually be hitting theaters — marking the director’s first film since 2007’s There Will Be Blood. While we’ve gotten a glimpse of the story through details, photos and videos, there’s been many rumours of its ties to the founding of scientology, with Philip Seymour Hoffman possibly portraying L. Ron Hubbard.

In a new interview with EW (via Cigs & Red Vines), the actor downplays this comparison, which corresponds with some initial screening impressions we heard. So check out the quotes below, and see 15 new stills rounded up, some from the aforementioned site and others that have been sent in. And while you’re at it, keep on helping with the drive to get The Master in 70mm in your local area and if you’re already in the Austin area, count your blessings.

“It’s not the L. Ron Hubbard story. [Scientology] was one of the bigger movements at the time, but there were a lot of movements at that time,” says Hoffman. “There’s nothing about how I’m behaving or talking that echoes [Hubbard]. I thought of a lot of other bigger-than-life personalities, charismatic people like Orson Welles.”

“People are going to have to draw their own conclusions to that aspect of the movie,” says producer JoAnne Sellar. “[Anderson] is interested in how veterans came back from World War II. They were these lost souls who were uncertain about their future.”

“Joaquin’s character is like a beaten dog,” says Hoffman. “No matter where he goes, [Quell] gets into severe trouble. And somehow I’m able to deal with him.”