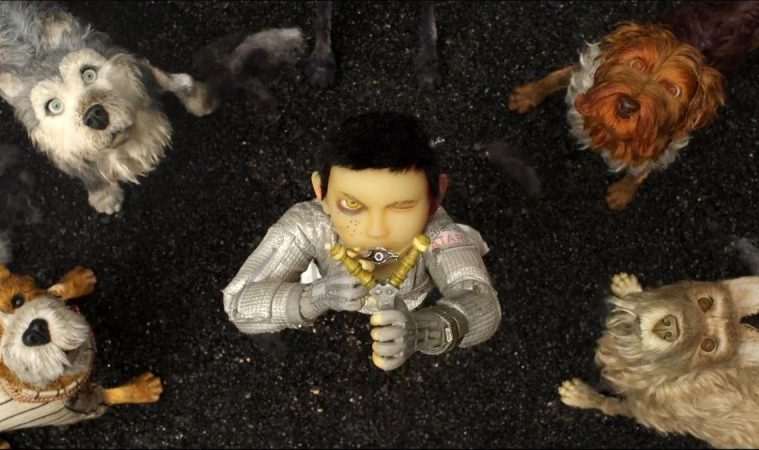 As March brings a close to 2017 in cinema with the Academy Awards, there are also a great number of noteworthy 2018 films making their way to theaters, ranging from animated adventures to dark comedies to ambitious blockbusters. Looking further back, in terms of restorations that are touring the country, don’t miss Chronicle of Anna Magdalena Bach, Mind Game, Police Story, and Eight Hours Don’t Make a Day.

Synopsis: When the creator of a virtual reality world called the OASIS dies, he releases a video in which he challenges all OASIS users to find his Easter Egg, which will give the finder his fortune. Wade Watts finds the first clue and starts a race for the Egg.

Why You Should See It: It’s a strange feeling not to have an overwhelming amount of anticipation for a Steven Spielberg film, not to mention a blockbuster that seems directly up his alley. However, judging from the trailers, the CGI environments here feel less than inviting and there’s not a strong narrative hook, but here’s hoping the king of blockbusters has something more up his sleeves. He’s certainly surprised us before.

Synopsis: Late in the War of 1812, a young Mohawk woman and her two lovers battle a squad of American soldiers hell-bent on revenge.

Why You Should See It: After his acclaimed debut We Are Still Here, Ted Geoghegan is back for his follow-up. “What at first feels put-on becomes lived-in; as actors sink into characters and grisly displays of violence allow for direct confrontations with suffering, Mohawk offers a raw and earnest condemning of the white man’s historical and ever-present atrocities that feels particularly urgent today,” Mike Mazzanti said in his review. “Shot in only natural light on actual Mohawk land, Geoghegan makes it clear that even with little means he can still deliver sheer affect.”

Why You Should See It: Max Winkler’s debut Ceremony was an assured indie dramedy and now eight years later, he’s back with his follow-up. Flower, which premiered at the Tribeca Film Festival last year, has the impressive cast of Zoey Deutch, Kathryn Hahn, Adam Scott, Tim Heidecker, Joey Morgan, Dylan Gelula, and Maya Eshet. Hopefully Winkler has cooked up another witty, well-observed comedy.

Synopsis: Everyone deserves a great love story. But for Simon it’s complicated: no-one knows he’s gay and he doesn’t know who the anonymous classmate is that he’s fallen for online.

Why You Should See It: It’s a shame how long it takes Hollywood to properly reflect the experiences of society when it comes those most marginalized, but they are slowly coming around. This month sees a youth-focused high school-set romance featuring a gay a character, and while it might play it a bit safe, here’s hoping it’s the first of many more to come.

Synopsis: After the disappearance of her scientist father, three peculiar beings send Meg, her brother, and her friend to space in order to find him.

Why You Should See It: With a release in just a week, word on A Wrinkle in Time has been peculiarly quiet, particularly in comparison to its sustained marketing push. After the one-two punch of Selma and 13th, hopefully Ava DuVernay’s plunge into fantasy will carry the emotional intensity that has defined her prior work, or show us something altogether new.

Synopsis: Two upper-class teenage girls in suburban Connecticut rekindle their unlikely friendship after years of growing apart. Together, they hatch a plan to solve both of their problems-no matter what the cost.

Why You Should See It: One of the most acclaimed films coming out of Sundance Film Festival last year was Cory Finley’s Thoroughbreds. The black comedy, starring Olivia Cooke, Anya Taylor-Joy, and the late Anton Yelchin, will finally get a release this month. Teasing a style both behind the camera and on the page, it looks to be a strong break-out feature for Finley.

Synopsis: Chaos erupts after the death of the Soviet dictator.

Why You Should See It: After successfully creating one of the funniest shows on television, Veep creator Armando Iannucci finally returned feature filmmaking with his In the Loop follow-up The Death of Stalin. Starring Steve Buscemi, Simon Russell Beale, Michael Palin, Paddy Considine, Rupert Friend, Jason Isaacs, Andrea Riseborough, and Jeffrey Tambor, Dan Schindel said in his review, “essentially all of the characters in the likes of The Thick of It, Veep, In the Loop, and now The Death of Stalin are politicians, but I honestly couldn’t tell you a single actual political belief any of them are stated to truly hold. That, of course, is a key part of Iannucci’s satire – that these conflicts are over power for its own sake and not for the betterment of anyone’s welfare, that this world is one of pure venality. Death of Stalin ramps this up to its purest form, depicting a sphere of government within which the will of the people is dismissed as irrelevant, and the stakes of political battles are not just jobs but life and death.”

Synopsis: A heinous crime tests the complex relationship between a tenacious personal assistant and her Hollywood starlet boss. As the assistant unravels the mystery, she must confront her own understanding of friendship, truth, and celebrity.

Why You Should See It: The vibrant independent films of Aaron Katz are always something to look forward to and his latest featuring the compelling pair of Lola Kirke and Zoe Kravitz. “Gemini is also a fantastic neo-noir set in the Thief-inspired Los Angeles of Drive, an upside-down city, as captured in the surrealistic opening credits by cinematographer Andrew Reed, where morals have all but vanished, leaving behind only a group of ghostly beings trapped in the limbo of their crushed dreams and dissatisfaction,” Jose Solís said in his review.

Synopsis: A teenager gets a summer job working for a horse trainer and befriends the fading racehorse, Lean on Pete.

Why You Should See It: After his stellar pair of dramas, 45 Years and Weekend, Andrew Haigh is back with Lean on Pete. Rory O’Connor was a bit more mixed in his review, saying “large portions of his latest film, while exquisitely photographed, are devoted to admiring those stunning vistas, but you might be left wondering what happened to the plot,” but nonetheless I can’t wait to see Haigh’s latest.

Synopsis: A troubled family face the facts when something goes terribly wrong at their son’s desolate military post.

Why You Should See It: One of the best films we saw last year, Samuel Moaz’s Foxtrot finally gets a proper release this month. Zhuo-Ning Su said, “A couple grieves the loss of their child, a group of adolescent soldiers ponder the sense of life spent waiting for war. Emerging therefrom is a contemplation on the Israeli fate both eloquent and uncommonly refined. Demonstrating tremendous narrative versatility that sees him switching gears between emotionally heightened chamber drama and lively, theatrically enhanced interludes, Maoz treats the sensitive subject matter with the gravity it deserves while using moments of levity or visual pizzazz to drive home his most intrinsic points. The breadth of the Jewish experience opened up by this tonal richness is kaleidoscopic, breathtaking.”

Why You Should See It: It was only last week that Hong Sang-soo premiered his latest film, Grass, at Berlinale (our review), but back in the U.S., Cinema Guild will continue their releases of the prolific South Korean director’s films, and next up is Claire’s Camera. Shot while at Cannes Film Festival, the drama reteams the director with Isabelle Huppert and Kim Min-hee. “Huppert and Kim are clearly having fun riffing off one another, each speaking in lightly broken English and conveying the pleasures of ephemeral encounters in low-stakes liminal spaces, such as the one represented by the festival,” Giovanni Marchini Camia said in his review.

Synopsis: A young woman is involuntarily committed to a mental institution, where she is confronted by her greatest fear–but is it real or a product of her delusion?

Why You Should See It: If you’ve seen the equally overlooked Logan Lucky and his app/HBO show Mosaic, you know that Steven Soderbergh is on a prolific streak of unbridled creativity. His latest work is the iPhone-shot psychological thriller Unsane starring Claire Foy, and it looks to be another success. “What first appeared to be a fun riff on One Flew Over the Cuckoo’s Nest soon transforms into something much darker,” Rory O’Connor said in his review from Berlinale.

3. The Legacy of a Whitetail Deer Hunter (Jody Hill; March 16)

Synopsis: Jaden, a cool and confident sixth-grade boy, is supposed to be bonding with his father on a hunting trip, but he wants to do anything but.

Why You Should See It: He’s been rightfully busy for years with Eastbound & Down and Vice Principals, but Jody Hill is finally returning with his first feature since his brilliant dark comedy Observe & Report. Starring Josh Brolin and Danny McBride (of course), The Legacy of Whitetail Deer Hunter will premiere at SXSW and then hit Netflix just a few days after. Here’s hoping Hill’s streak continues and it ups the batting average of other original films on the platform.

Synopsis: The story follows a filmmaker whose life is sent into a tailspin by the return of a former lover just as he is about to embark on the shoot of a new film.

Why You Should See It:  Following up one of his best films in some time, My Golden Days, Arnaud Desplechin is back with Ismael’s Ghosts. Starring Marion Cotillard, Charlotte Gainsbourg, Mathieu Amalric, and Louis Garrel, the film opened Cannes Film Festival last year and now the director’s cut will be arriving in the U.S. next month. Giovanni Marchini Camia said in his rave review from Cannes, “Far from mere ostentation or playfulness, this proliferation of narrative layers, each drawing from the recesses of Ismael’s psyche, has a clear purpose: cumulatively and forcefully, it renders the impression of someone assailed by the past to the point of being incapable of functioning within the present.”

Synopsis: Set in Japan, Isle of Dogs follows a boy’s odyssey in search of his dog.

Why You Should See It: It’s been quite a wait for Wes Anderson’s follow-up to The Grand Budapest Hotel, but it’s now premiered at Berlinale and will arrive in just a few weeks. Rory O’Connor said in his review, “It is a delightful, exquisitely-detailed production that sees Wes Anderson return to animated filmmaking for the first time since Fantastic Mr. Fox, and it’s clear, as he has admitted, that his biggest influences were not the works of Laika or Aardman, but rather Akira Kurosawa.”