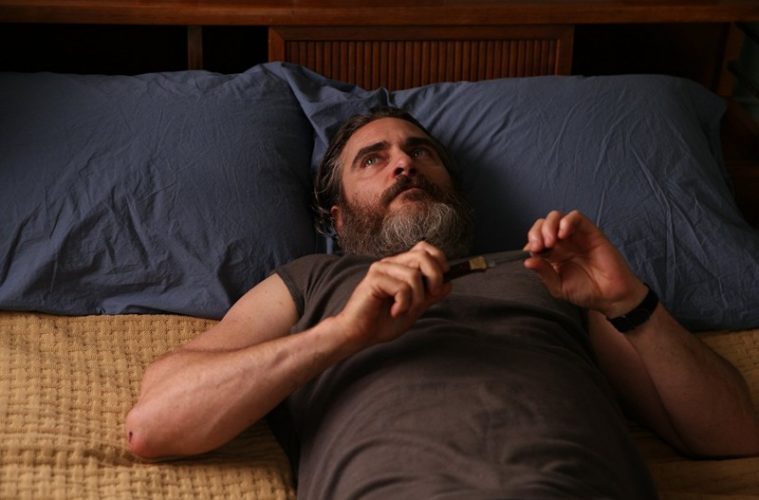 The calm before the Cannes and summer movie season storm, April has the makings of one of the best months of the year for movie-going. Featuring a top five selection of films that I imagine we’ll see a lot more of on year-end lists, there’s also exciting studio fare, Isabelle Huppert and Michelle Pfeiffer vehicles, and much more.

Synopsis: In Brooklyn, New York, Kyra (Pfeiffer) loses her job and struggles to survive on her ailing mother’s income. As the weeks and months go on, her problems worsen. This leads her on a risky and enigmatic path that threatens her life.

Why You Should See It: After giving one of the best supporting performances in last year’s mother!, Michelle Pfeiffer’s next leading role arrives with Where is Kyra?. The latest film from Mother of George director Andrew Dosunmu, reteaming with the incredible DP Bradford Young, follows the actress as a divorcee adrift in NYC trying find some semblance of clarity in her life. Dan Mecca said in his review from last year’s Sundance, “This is a more fully-realized performance than anything she’s done in some time. Physical in every conceivable way (without giving too much away), it’s the kind of turn that will hopefully draw attention back to this talented performer. Sutherland is also commendable as Kyra’s potential knight in shining armor, a good man with a past he’s continually trying to make amends for.”

Synopsis: A family is forced to live in silence while hiding from creatures that hunt by sound.

Why You Should See It: With its inventive trailer playing before every tentpole the last many months, John Krasinski’s foray into horror will finally arrive this week. After a SXSW premiere that effectively frightened audiences, we’ll have to see if the hype holds up. At the very least, perhaps it will encourage audiences to seek out Millicent Simmonds’ breakout performance in Todd Haynes’ overlooked Wonderstruck.

Synopsis: A teacher who has been disliked by her colleagues and her students develops a nocturnal alter ego after she is struck by lightning.

Why You Should See It: It’s always a good month when we see more of Isabelle Huppert on screen, and this month her NYFF selection arrives in theaters. “Mrs. Hyde, a socially bellicose, darkly humorous farce with aesthetic and spiritual echoes of both giallo horror and recent Kaurismäki, is the latest work of film critic-turned-actor-turned-director Serge Bozon,” Rory O. Connor said his review from Locarno last year.

Synopsis: An Aboriginal man goes on the run after he kills a white man in self-defense.

Why You Should See It: Winner of the top prize at TIFF’s Platform section, Christopher Schobert said in his review, “What Sweet Country lacks in surprises is more than compensated for with emotional power and haunting images. The outback has rarely looked so harsh and unforgiving. Australian director Warwick Thornton, whose debut feature Samson and Delilah earned the Caméra d’Or at the 2009 Cannes Film Festival, achieves something rather noteworthy here. He has created a film set in eerie, wide-open spaces that also feels utterly claustrophobic. There is nowhere for Sam and Lizzie to hide, and no place that feels the least bit welcoming.”

11. Jeannette: The Childhood of Joan of Arc (Bruno Dumont; June 13)

Synopsis: Young shepherdess Jeannette, the future Joan of Arc, already carries the weight of the the French nation on her shoulders as she grapples with matters of the soul.

Why You Should See It: Following his continually surprising Li’l’ Quinquin and Slack Bay, Bruno Dumont’s metal musical take on the Joan of Arc story is perhaps more fascinating in conceit than execution, but it’s no less worth seeing. Ethan Vestby said in his review, “It’s easy to imagine the “old-school” Bruno Dumont Joan of Arc film; faith, martyrdom, and the landscape of the French countryside intermingling to a wrenching finale, with Bresson and Dreyer certainly paid their transcendental cinema due. Though perhaps realizing their films weren’t the be-all, end-all in terms of representing the French icon, even if Preminger, Rivette and uh, Besson, had also offered their own takes that showed a portrait beyond the trial and subsequent burning at the stake, he finally set about making it, but as a new artist.”

Synopsis: A high school girl’s life in Iran becomes more complicated when her mother catches her in an act of rebellion.

Why You Should See It: Although it came to fall festivals, Ava landed on our radar just recent at New Directors/New Films, and it will be one of the few films there arriving soon. Leonardo Goi said in his review, “Sadaf Foroughi’s fulminating debut feature, Ava, may strike a few chords among Persepolis enthusiasts. A role-model schoolgirl turned rebel, its eponymous teenage girl is a rollicking blend between Marjane Satrapi and Vincent Paronnaud’s black-and-white punk teen and The 400 Blows‘ Antoine Doinel – a heroine fighting to reassert her freedom in the face of an ultra-conservative environment. Tehran-born, Montreal-based writer-director Foroughi draws from her childhood memories to conjure up a gripping coming-of-age story where the claustrophobic relationship between an overprotective mother and her teenage daughter acts as a synecdoche to expose a patriarchal society eager to chastise whatever falls outside its rigidly policed norms.”

Synopsis: Two brothers return to the cult they fled from years ago to discover that the group’s beliefs may be more sane than they once thought.

Why You Should See It: Doing a lot with a little, the directing duo of Justin Benson and Aaron Moorhead showed their inventivess most recently with Spring, which tied together romance and horror.  Their next film The Endless riffs on H.P. Lovecraft’s “Unknown,” and arrives this week. “You don’t need to have seen Resolution to enjoy what this new film offers, but it does enrich the experience ten-fold because of the expansion of mythology that’s presented through two minor characters originally dismissed as brief comic relief,” Jared Mobarak said in our review.

Synopsis: A man discovers that he has superpowers and sets out to save his troubled daughter and others.

Why You Should See It: After his zombie thriller Train to Busan earned over $135 million worldwide — and interest in a Hollywood remake — director Yeon Sang-ho is already back with his next feature. Titled Psychokinesis, it’s an action-packed black comedy film following Ryu Seung-ryong who plays a man who discovers superpowers and intends to use them to save his daughter. After getting a release in its native country earlier this year, Netflix picked it up for a worldwide debut, which will happen in a few weeks.

Why You Should See It: Spike Lee’s next feature Black Klansman, produced with Jordan Peele, is one of our most-anticipated films of the year, but first we have his capturing of an acclaimed play, which turned out to be one of our favorites of Sundance. Dan Schindel said in his review, “Once again, Spike Lee has found an innovative theatrical production and brought it to blistering cinematic life. Antoinette Nwandu’s Pass Over, produced in 2017 by Chicago’s Steppenwolf Theatre, combines Waiting for Godot, Biblical lore, and contemporary American race issues into a story that’s at turns funny, suspenseful, and bizarre. ”

Synopsis: A woman returns to the community that shunned her for her attraction to a childhood friend. Once back, their passions reignite as they explore the boundaries of faith and sexuality.

Why You Should See It: Following up his Oscar win for A Fantastic Woman, Sebastían Lelio’s next drama will arrive this month, featuring Rachel McAdams and Rachel Weisz. “The complex character study born from such volatile and public history erupts through the pleasantries of habit,” Jared Mobarak said in his review. “Disobedience‘s journey is one of authentic emotional honesty excelling in instances of insecurity and fear. No matter how raw Esti and Ronit’s love and passion, the abject horror of being discovered trumps their pleasure. It’s this depiction of repression that will break your heart because it has the potential of grabbing hold so strongly that free will becomes buried forever.”

Synopsis: A teenager gets a summer job working for a horse trainer and befriends the fading racehorse, Lean on Pete.

Why You Should See It: After his stellar pair of dramas, 45 Years and Weekend, Andrew Haigh is back with Lean on Pete. Rory O’Connor was a bit more mixed in his review, saying “large portions of his latest film, while exquisitely photographed, are devoted to admiring those stunning vistas, but you might be left wondering what happened to the plot,” but nonetheless I can’t wait to see Haigh’s latest.

Synopsis: A traumatized veteran, unafraid of violence, tracks down missing girls for a living. When a job spins out of control, Joe’s nightmares overtake him as a conspiracy is uncovered leading to what may be his death trip or his awakening.

Why You Should See It: Considering it has yet to be released in the United States, it was quite a feat for Lynne Ramsay’s We Need to Talk About Kevin follow-up You Were Never Really Here earned a spot in our top 25 films of 2017, which shows just how much our international contributors adored it. One of our favorite films of Cannes Film Festival, where it picked up a Best Screenplay and Best Actor award, Giovanni Marchini Camia said in our review, “The results are breathtaking, and You Were Never Really Here stands alongside Claire Denis’ Bastards as one of the most ferocious indictments of systematic abuse of power and gender violence ever projected on a screen.”

Why You Should See It: As she continues to edit one of our most-anticipated films of the year with her ambitious sci-fi drama High Life, Claire Denis has another feature arriving first, and it’s one of the most delightful of the year. “Claire Denis may not be the first Francophone auteur expected to turn in a romantic comedy, and her latest will disappoint those expecting Nancy Meyers a Paris,” Ed Frankl said in his full review. “However, Let the Sunshine In (Un Beau Soleil Interieur) is a sophisticated, idiosyncratic, thoroughly modern interpretation of a French romantic farce, perceptive if not laugh-out-loud funny, featuring a top-form Juliette Binoche as a middle-aged divorcée wading through a series of exasperatingly self-centered men in search not just for love, but a partner with whom she can be herself.“

Synopsis: After suffering a near fatal head injury, a young cowboy undertakes a search for new identity and what it means to be a man in the heartland of America.

Why You Should See It: One of the most heart-stirring, authentic films I’ve seen in the past year is Chloé Zhao’s remarkable drama The Rider, which stars first-time actor Brady Jandreau in a story loosely based on his life. “What does a cowboy do when he can’t ride?,” Ed Frankl said in our review. “Chloe Zhao’s absorbing South Dakota-set sophomore feature has its titular rider come to terms with such a fate, in a film that’s a beguiling mix of docudrama and fiction whose story echoes much of history of its actors’ own lives. Zhao’s combination of the visual palette of Terrence Malick, the social backbone of Kelly Reichardt, and the spontaneity of John Cassavetes creates cinema verité in the American plains.”

Synopsis: Based on the novel by Antonio Di Benedetto written in 1956, on Don Diego de Zama, a Spanish officer of the seventeenth century settled in Asunción, who awaits his transfer to Buenos Aires.

Why You Should See It: After helming some of the best films of the previous decade with 2001’s La Ciénaga and 2008’s The Headless Woman, Lucrecia Martel returned last fall with her most ambitious film yet, Zama. The film is a towering achievement of composition and craft and while I can see why our Venice review was mixed due to the narrative’s elusive nature, there is no other film this month I’m more eager to experience on the big screen again. – Jordan R.