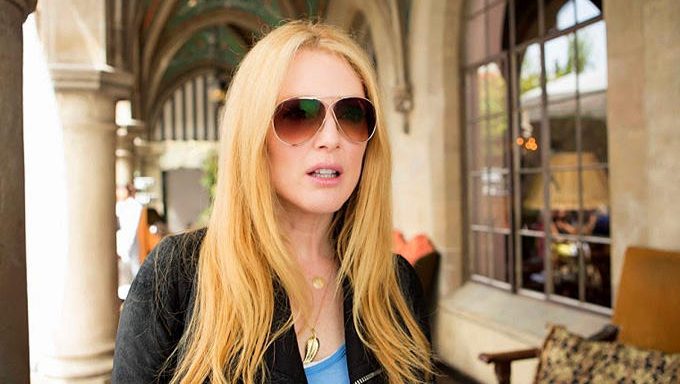 Bruce Wagner knows what’s in the water at Hollywood. He’s established an authorship as a novelist/screenwriter whose examinations of lost humanity star the citizens of Tinseltown, casting producers, actors, and writers in a shadow that’s more than insider gossip. In Maps to the Stars, his latest script as directed by David Cronenberg, fame creates haunted psychoses, with vain movie stars tormented by ghosts of incest.

The center of this ensemble piece is Mia Wasikowska’s disturbed Agatha Weiss, who returns to Hollywood years after she tried to burn down her family’s house, and murder their cash cow son Benjie (Evan Bird), an acting superstar who talks franchises at the dinner table with his managing mother (Olivia Williams) and ritzy massage therapist father (John Cusack). She befriends a limo driver/screenwriter named Jerome (Robert Pattinson), and becomes a “chore whore”for middle-aged actress Havana Segrand (Julianne Moore), who is desperate to repeat the role once made famous by her sexually-abusive mother in a new remake from a Paul Thomas Anderson-esque director. Wagner’s delightfully toxic repartee and Cronenberg’s disturbing curiosities make for a wicked mix, which despite its third act imperfections, recalls the first time you saw Billy Wilder’s Sunset Boulevard.

Before publishing novels, Los Angeles native Wagner labored as screenwriter on Hollywood projects like 1984’s lost Young Lust and later A Nightmare on Elm Street 3: Dream Warriors. Cronenberg executive produced Wagner’s 1998 directional debut I’m Losing You, about a movie producer, which was an adaptation of his own novel.

On Friday before the Oscars, The Film Stage talked with Wagner about his psychotic star tale, why you shouldn’t read its juiciness too literally, how his collaboration with Cronenberg was like The Fly, and more. Check out the full conversation below.

The Film Stage: When you write an acerbic tale like Maps to the Stars, are you mostly imagining an audience of people who outsiders to Hollywood folk? Do you expect that people within the business will see these stories more intimately?

Bruce Wagner: I’m from Los Angeles, so Hollywood is more a backdrop for me. I don’t really consider my books to be “Hollywood”novels. I am not interested in excoriating or exploring the industry, the mores and manners of people in show business. And I don’t really write them as memoirs either. I write about extremists, people who are indulging in behavior —sometimes bad behavior, sometimes good behavior. So none of them are really anecdotal. That’s not how I work as an artist. Maps to the Stars is not a guide to the urgent state of affairs of Hollywood whatsoever. It’s an exploration of a damaged family, and the extremes of how people become corrupted by fame and by family ties. It’s more that than notes of observer.

It’s really almost like a melodrama. It’s a kind a fever dream, a ghost play. One of the interesting things for me is that in the original script for Sunset Boulevard, it begins in a morgue, with the cadavers explaining how they got there. I think that’s what Maps to the Stars is. And there are these themes of mutilation of both literal and spiritual, in the case of the Weiss family. They are embodied by fruits of incest. And there’s madness present as well. The madness being that Wasikowska’s character is actually the most sane person in the film, and wants to end it.

You’ve known David Cronenberg for years, but this is the first time you’ve written something for him. What was your chemistry like on this project?

I consider David to be a visionary and a master. It would be like writing a song and having it interpreted by someone of genius. And he brought something that was very mysterious to it, and was yet unavoidably himself. His fingerprints are on every scene obviously, in terms of casting and pacing, and this cool formalism. I felt that, like in the The Fly, that David and I got into the same pod, and our DNA kind of tangled [laughs]. I wrote the script many years ago, and we tried to make it then, but David wanted to shoot the entire film in Los Angeles, which was not possible. And we ended up shooting for five days in Los Angeles which was the first film in a long while that he has shot on American soil. And it was unique in that way. He has said that all of his films are comedies. But I think they’re visionary in how he explores human behavior.

How did David’s involvement change what you had written? What you would have done differently with the story?

The script might have been longer, but one thing that David doesn’t like is a long script. And the first script was a little more Byzantine, a little more baroque. Part of our collaboration was that I accede to David’s desires as a filmmaker. And you do that with any process with a director. We eliminated some scenes with regards to budget. There were more ghosts in the script. I like ghosts, but David is more ideologically opposed to ghosts. He wanted a strong psychological reason to it, and a meaning. Whereas I’m a little messy about it, and don’t care as much.

There’s a very up-to-date sensation within the film, regarding the names of celebrities mentioned, along with general terms. As the Maps to the Stars took a while to come to fruition, what elements were changed in the script?

The only things there were changed, aside from some scenes that were changed, were technical things and proper nouns. When someone said “call me,”that was changed to “text me.” If it was an answering machine, we changed it to an iPhone. Very small things, but David is very much like a theatre director. If an actor left out an “and” or “the,” a script supervisor would tell David about it, and it would be up to David to see whether he wanted them to say it or not. Not a word was changed, and no improvisation.

From your perspective as an author, how do you perceive David’s relationship with the literary world?

David is a writer himself, and he has a novel (2014’s “Consumed”). He knows his way around the word, and he honors that. And while this film was not an adaptation of one of my books, he adapted William S. Burroughs [Naked Lunch], Don DeLillo [Cosmopolis], etc. His inspirations are from writers of books. I’d say he’s more directly inspired by literature or theater than he is by other movies.

What perspective did the Maps to the Stars team have for awards in 2014? Moore won Best Actress at the Cannes Film Festival last May, but this movie has a different appeal than other reflective Hollywood fare. It’s not a flattering perspective on the same people who might have immediately identified with something like Birdman. This film even features a line in which someone mentions how a certain part is “made for Best Supporting Actress.”

We really felt that we had won everything when Julianne won Best Actress in Cannes, and she got nominated for a Golden Globe [for Maps to the Stars]. But this is not Academy fare, and we did not want to muddy the waters with a campaign. Aside from the fact that it would cost money, we didn’t want to take away from her performance in Still Alice. She’s extraordinary in both films. We felt that we happily were very happy with Still Alice getting that focus. This films come out the week after the awards, and our film is kind of the b-side of that record. I think people will say, “if you like her in Still Alice, you will like her in Maps to the Stars.”

Maps to the Stars opens at select theaters and VOD on February 27th.