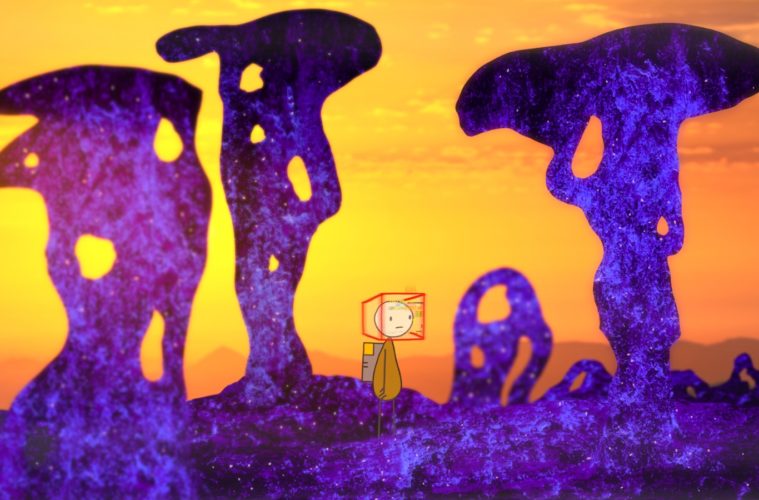 Throughout the whole of Don Herzfeldt’s World of Tomorrow trilogy, one thing is always constant; even in a future of amazing technology, it will be the ineffable interior of the human soul that will hold the most value. Clones, robots, and time travel (if you’ve seen any of these films, you will know the right way to pronounce that) may allow for new norms in terms of human accomplishment and lifespan, but they will never fill the void of those things we value as children, devoid of concepts of expense and mortality. It is this tenet that guides Hertzfeldt’s narrative and soul throughout the first two installments, and it finds new and more absurd heights in his third, The Absent Destinations of David Prime.

With such a guiding principle, it is no wonder that over the last five years, Hertzfeldt has crafted what might be the crowning achievement of modern science fiction. Each chapter of his trilogy—which one can only hope will someday outgrow that designation—only grows in scope and scale and ambition, and it’s to Hertzfeldt’s credit as a writer and director that the additional time and spectacle never feels excessive or indulgent. Rather, his canvas and palette seem to grow in parallel with his expanding thesis. As such, when one learns that Episode 3 is longer than the two that came before, they can be assured that it is also more aesthetically inventive and narratively complex.

The bones of that narrative are best discovered in the watching, but investigating and explicating in any meaningful way what makes The Absent Destinations of David Prime so special requires a bit of foundation-laying on the part of a reviewer. Jumping off from and circling back to what we have seen in the previous installments, this episode opens with David Prime—that is, the original version of the David clone we met previously—on a lonely mission driving a space freighter. In the midst of shopping through some classically Hertzfeldtian ads (Grow Gills! Why Not?) David receives a warning that he has a foreign memory. Accessing this memory brings up a long-repressed encounter he had as a child with a distant Emily Clone, who is reaching out to David Prime in hopes that they may one day be able to find each other and recapture the love that their future/past clones will have/did have.

This launches David Prime on a journey through space, time, and possible madness. It’s to his credit as a master of tone that Hertzfeldt can balance the real pathos and empathy of his story with the more absurd elements that he sprinkles in to further mock and satirize the baser concerns of his ever-growing future world. A shard of a rock displayed on a desktop can tug the heartstrings, while an example of the means by which clone children are educated and calibrated can elicit embarrassing peels of unhinged laughter.

This chapter isn’t as bleakly sad as those that came before, but it does conjure a more mature sense of emotional investment. There came a point in my third viewing that I realized just how thoroughly lonely this vision of the future must be that the concept of being in love––not the emotion itself but the mere promise that it has happened––will happen, and might happen again, could drive someone to the wildness this particular narrative demands. It isn’t just that these characters are specifically broken––though that certainly doesn’t hurt—it’s that the world itself is horrible. A veneer of technological excess and science fiction fulfillment covering the corroded and atrophied soul left to rot. In past chapters, the future was absurd; in this one, the future is corrosive.

While Hertzfeldt’s aesthetic remains as recognizable as ever (don’t worry, I think stick figures are here to stay forever) he stretches his muscles in terms of actual animation in ways that are both impressive visually and impactful emotionally. As David walks across a blasted landscape toward the promise of the knowledge of his future love, his body sways and drags in ways Hertzfeldt has never visualized before. This fluid, weighted motion stands in stark contrast to the rigid formality of all the other Emilys we have seen previously, lending his character a depth and humanity that is sorely needed among this scrum of clones, robots, and time agents. (Right, there are time agents. Don’t worry, Emily 9 will explain it to you.)

We live in a world where massive, billion-dollar franchises attempt to deal with time travel and future technology over the course of multiple hours and can barely think of anything better than ripping off Back to the Future. Meanwhile, a cult-favorite animator takes less than an hour and fifteen minutes and creates a stirring, bleakly funny, ultimately uplifting portrait of the whole of human need and desire.

World of Tomorrow Episode Three: The Absent Destinations of David Prime is now available on Vimeo.